I remember reading a story a while back about this star's brightness fluctuations. Is it still changing brightness? If so, is it possible to observe the change visually with a large telescope?

It is an 11th magnitude star, so it would be quite easy to observe with even a modest telescope. Is it possible to observe these changes? That depends on what you mean by "observe". Could you look at it at one time, estimate it's brightness, and then look at it at another time, make a second estimate and see that they are different? Absolutely, and not difficult at all. If you mean can you "perceive" the change in brightness while you are looking at it during one session?, then probably not.

As far as I know, the hoopla about the variations were mostly the result of not being able to explain what caused them. There has since been some limited evidence that the star may be a normal variable, but the majority consensus is that the dimming is due to an irregular cloud of dust around it. In either case, it is likely the variations will continue.

Here is how it has been varying over the past 2 years from the AAVSO database. (There are currently 33,360 amateur brightness measurements for this star in the database) 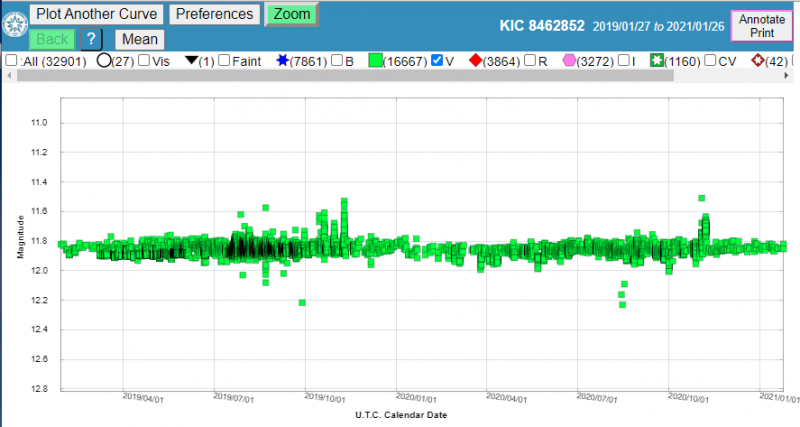 I have around twenty or so magnitude estimates of KIC 8462852 (Tabbys Star) in the BAAVSS database.

I've estimated it at 11.8m during every observation.

When it is fluctuating, I cannot detect it. I don't think my eyes are that keen.