It was a surprise that as the strict COVID-19 restrictions were lifted on Sunday - Feb 7 2021 it was accompanied by an excellent weather forecast. In addition, the moon rises only at 02:30.

The decision was simple, pack the scope and camping equipment and drive to one of the dark sites on the Israeli desert. 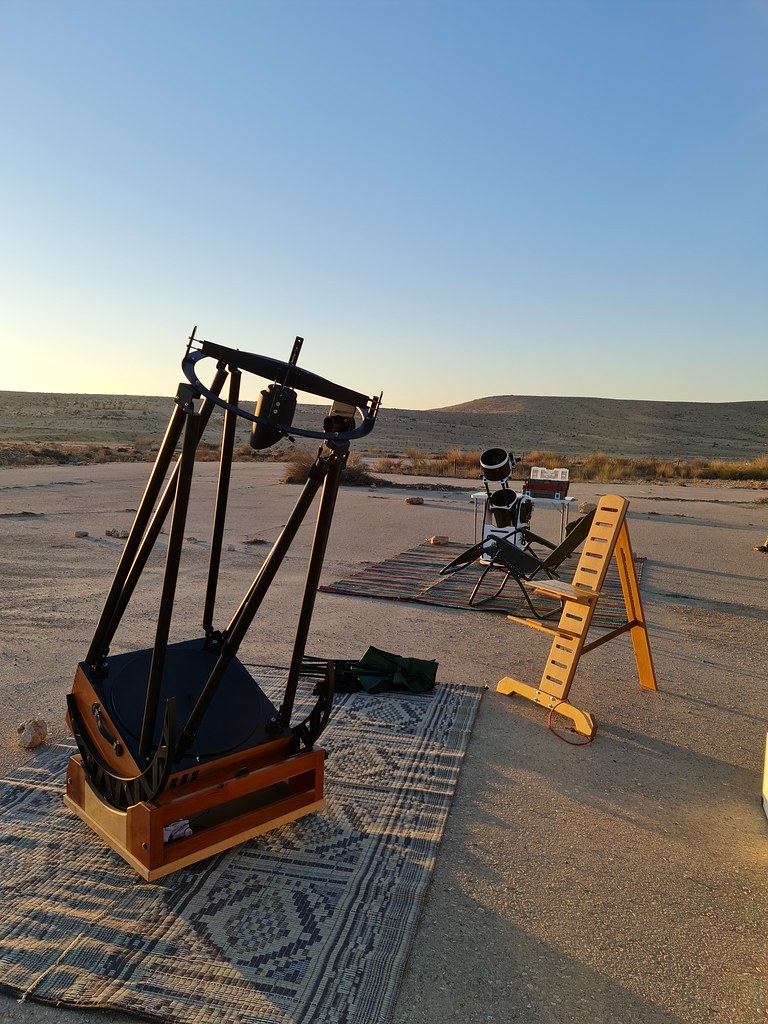 I did not have a winter observation session this season due to weather and COVID-19 and I miss these winter skies. While I do love summer skies with the center Milky way, all the nebulas and globular clusters, my primary focus during the past year are galaxies. The winter skies are full of galaxies and are crystal clear after the rain washed all the dust from the air. 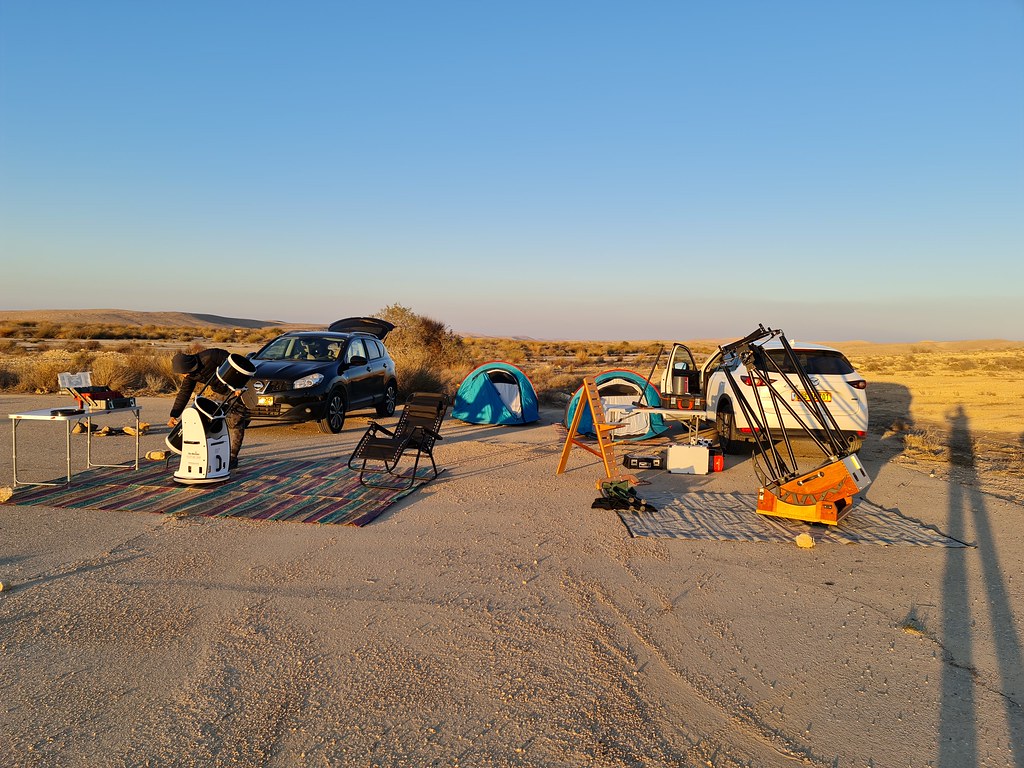 Waiting for the dark 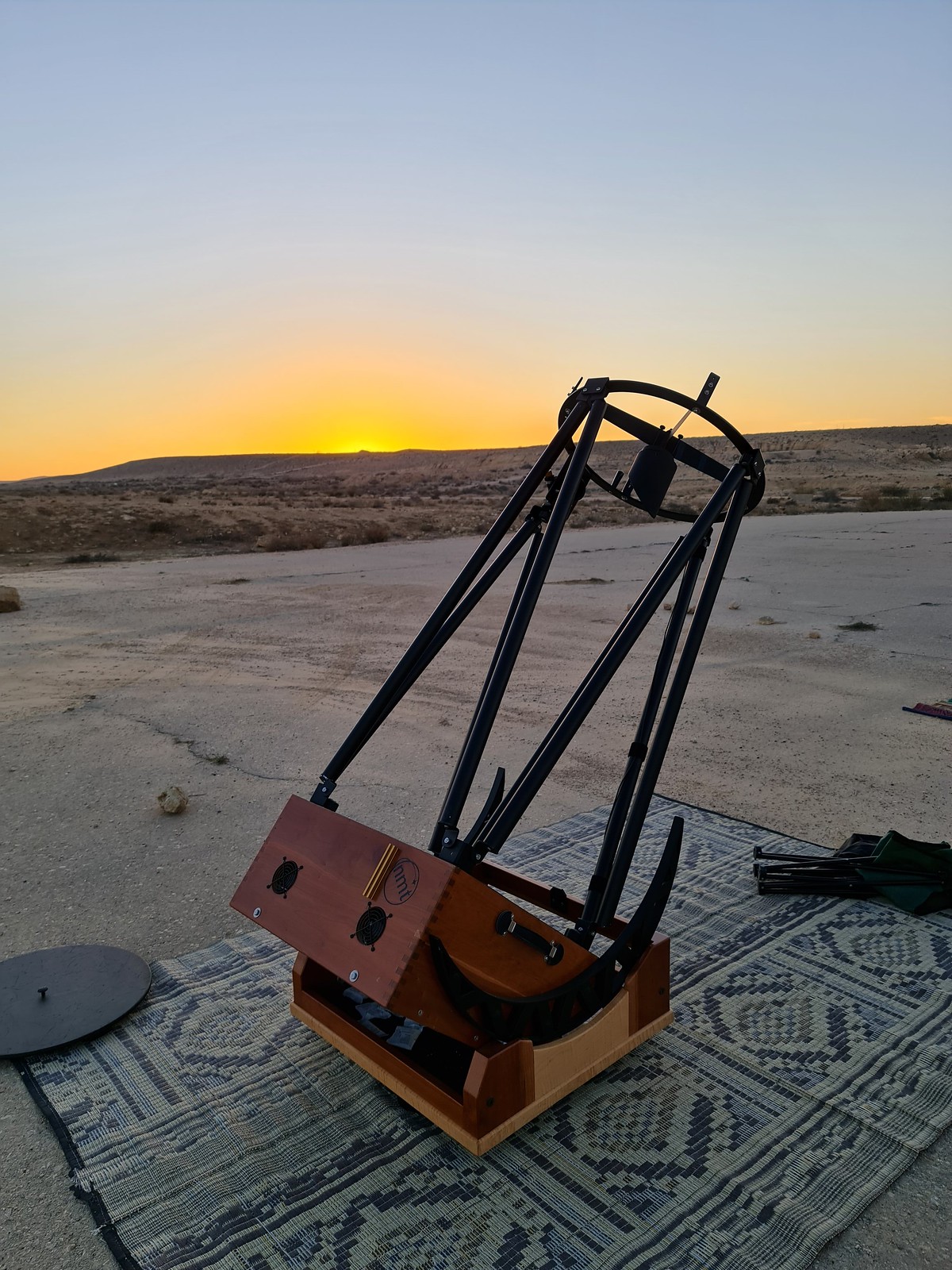 It’s embarrassing to admit but my Messier catalog is not fully completed. I am sure I observed all of the objects but I did not mark them all on my list. Therefore I want to finally complete this. My missing objects are in Virgo and in Coma Berenices M85, 100, 91, 89, 58, 90, 59 & 60. It’s time to see if my practice with dim galaxies clusters during the summer will help me to identify them clearly. Only a fully identified object will be marked as observed.

We reached the dark site at 16:30. Plenty of time to set up the camp and scope and it was all finished in daytime and we had time to rest, have a beer and watch the sun sets.

Darkness descended quickly and with it came the desert cold but everything paled with the majestic sight of the stars filled skies.

We had some humidity that made everything feel wet but as long as the Telrad is dry all is good. I activated the secondary dew heater just in case.

My first object was the Orion nebula. Through the Ethos 21mm, the nebula revealed multitude of details, from the beak, to the back of the nebula which completed a circle and even extended farther than anything I have seen to this point. The Trapezium four stars were pinpoint. As I switched to the Ethos 8mm, two additional stars were visible in the Trapezium. It’s the first time I see them and all six are pinpoint as I have never seen them before. This is the best evidence that the viewing conditions were spectacular this night.

I continued with other showcase items such as Flame nebula which was fantastic, especially when taking Alnitak out of the field of view, M35 and NGC 2158 in which I could resolve single stars easily and M46 with its planetary nebula and other open clusters in the area. Of course the double cluster is a must and magnificent, Andromeda galaxy with its two satellite galaxies in the same field of view (I even failed to mark them on my observation log), Duck nebula/Thor’s helmet and the M1. All were fantastic and provided lots and lots of details.

At this point, my Telrad started to dew a bit and the light shroud, table and the exterior of my eyepieces box started to get wet. The forecast indicated that the dew will subside later in the evening and as it predicted, a breeze came about an hour later and dried everything.

My galaxy hunting started with M81 and M82. Not much of a hunt but always a great sight to see them both in the same field of view and even in this low power, the irregular core of M82 was nicely visible. Powering the magnification up, gave more details and the arms of M81 were started to manifest.

From there, I moved to the main galaxy hunting ground - Loeo, Coma Berenices and Virgo.

I started in the upper part of Leo - the head (as pointed out by chrysalis), just above the star Algieba. 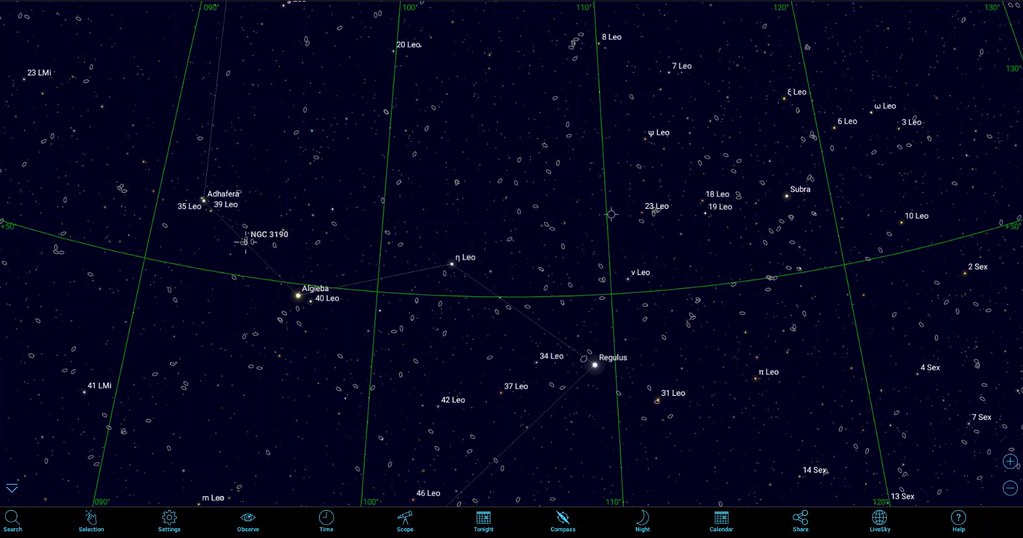 From there I continued to the area between Regulus and Chertan: 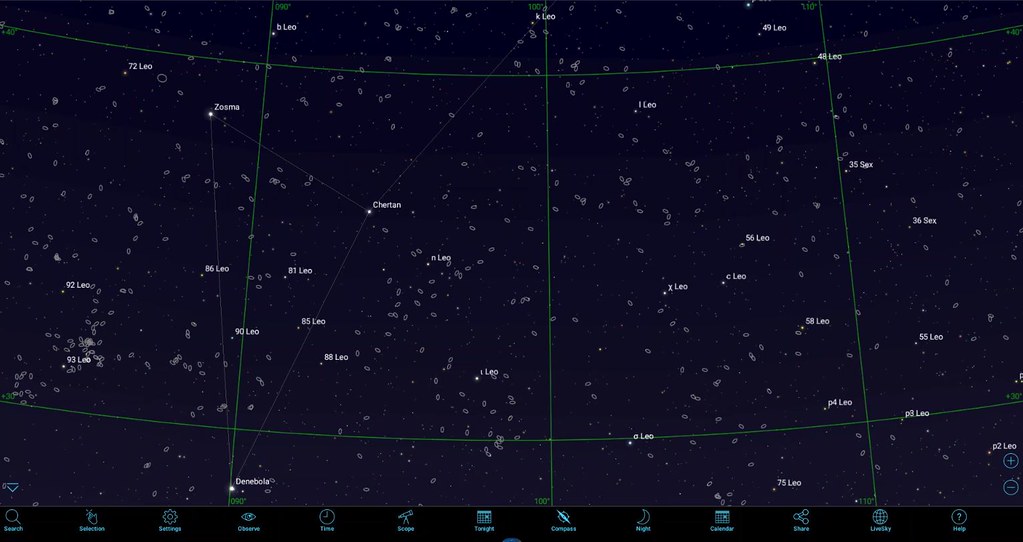 Here I observed M95, NGC 3389, NGC 3384, M105, M96 and more.
Below Chertan, I observed Leo triplet. This time the Hamburger galaxy - NGC 3626 provided details in higher power and its irregular dust lane was clearly visible.
In addition, within the triangle that is the Lion’s head I found another bunch of galaxies surrounding NGC 3607.

Before moving on to Virgo, I aimed the scope to Coma Berenices. 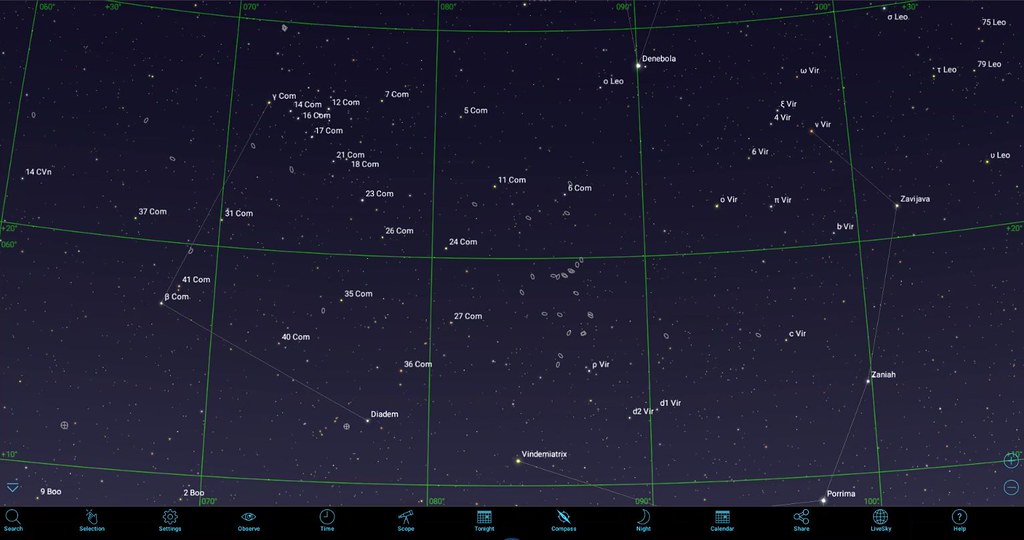 I always love to observe the Needle galaxy and the Whale galaxies. I missed the Blackeye and M53 but I will observe them in my next session. The wealth of galaxies in this area is wonderful. I aimed there to observe two specific galaxies and ended identifying and cataloging many more. The asymmetric core of the needle and the dust that goes through the “center” were superb and now that I during my summary I notice that I missed marking NGC 4562, another object for the next session.

The special shape of the Whale galaxy is always fun to observe with NGC 4627 above its core a bit towards the tail. NGC 4656 also provided excellent view and now I see that the “tail” I saw rising on its edge is actually a nebula! During the night time I thought it was part of the galaxy. Excellent.

I ended my journey with my missing Messier galaxies in Coma Berenices and Virgo. 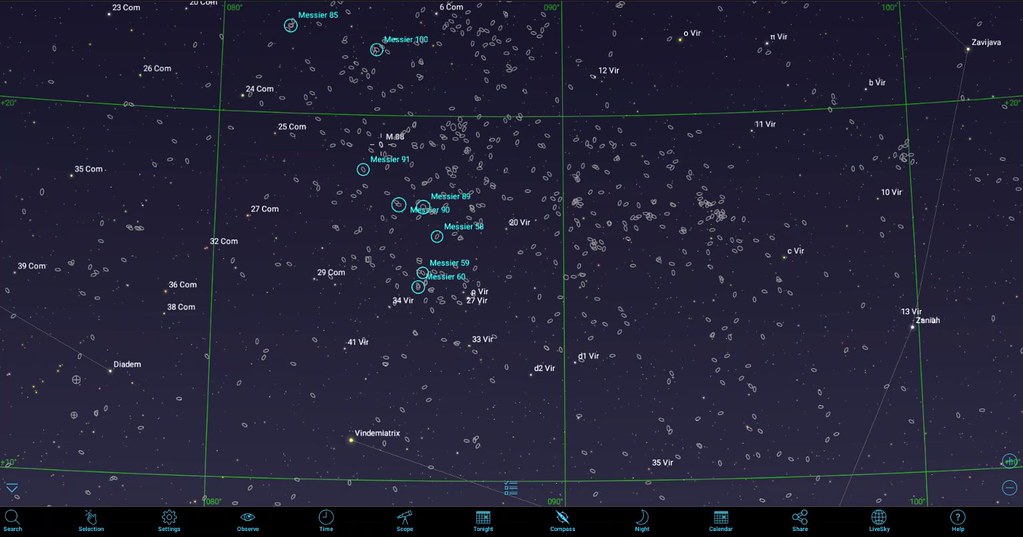 The area is so dense and full of galaxies which makes it a bit harder to accurately identify them. How do you identify a gray smudge over another gray smudge? First of all, I am looking for Messier objects. They are usually brighter than the rest. In addition, star hopping and star pattern recognition around the targeted galaxies and the position of a galaxy in relation to its neighbours.

I started my navigation in Vindemiatrix and slowly moved up until I encountered a bright enough galaxy. I was not sure which one it was but I quickly saw another bright galaxy and deduced they were M60 & M59. I continued up using the imaginary line both galaxies created and found M58. I continued along the path of the trail of these galaxies and found them all.

Along the way I found and identified many other galaxies such as Siamese Twins, NGC 4550, NGC 4571 and more.

My practice sessions of identifying galaxies in Abell 262, Abell 347 and Abell 426 proved itself very useful. As many galaxies in Virgo are much brighter, identification becomes easy - practice makes perfect (and I do need more of it).

My main target in the area of marking my last of the Messier catalog was accomplished successfully!
The region is so rich and as I write these lines, I continue to mark lots and lots of targets for my next observations.

Until 00:30, I managed to mark over 70 identified objects. True, not all got all my attention, but when trying to identify groups of galaxies, I usually go to my 8mm eyepiece and go over group members to make sure I identify them correctly and along the way get a better glimpse of them. In addition, many objects that I revisited revealed more details.

The expected moon and the high clouds that started to crawl from the north marked the end of this fantastic observation session. My gear was in the car and ready to go and I crawled to my tent to get a few hours of sleep before the long drive back home.

This is how it look in the morning 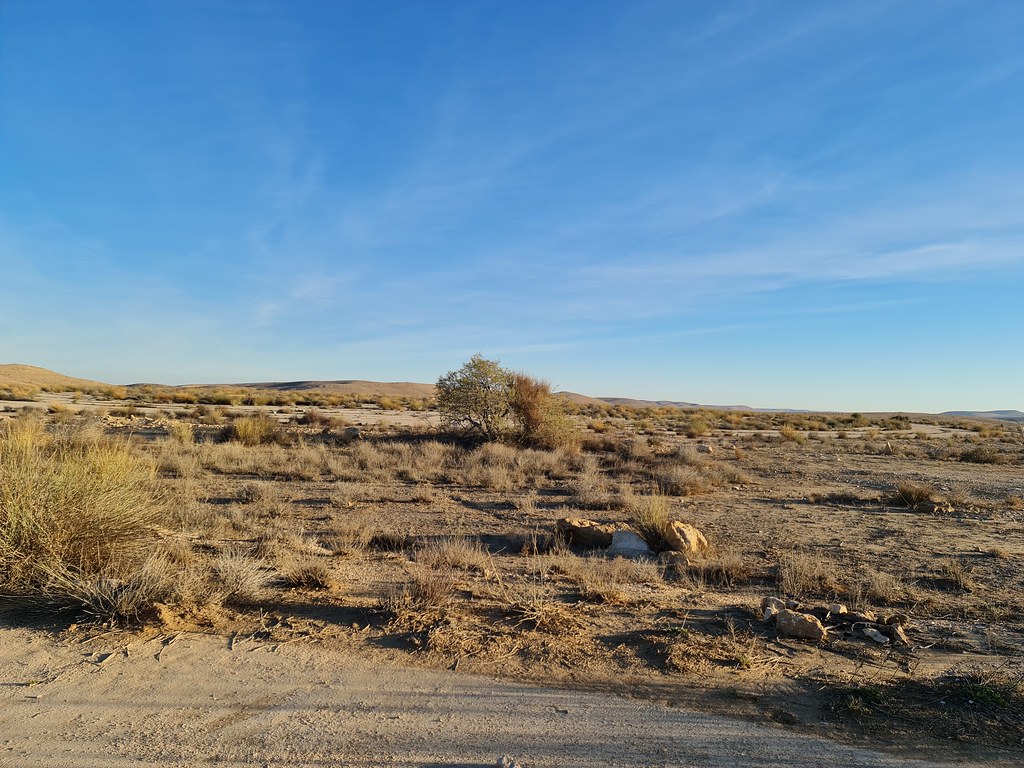 On my way back, I encountered a nougaty Savage that ran beside me and at some point just cut me off and moved to the other side of the road. Video here:

Fantastic end to a fantastic night. 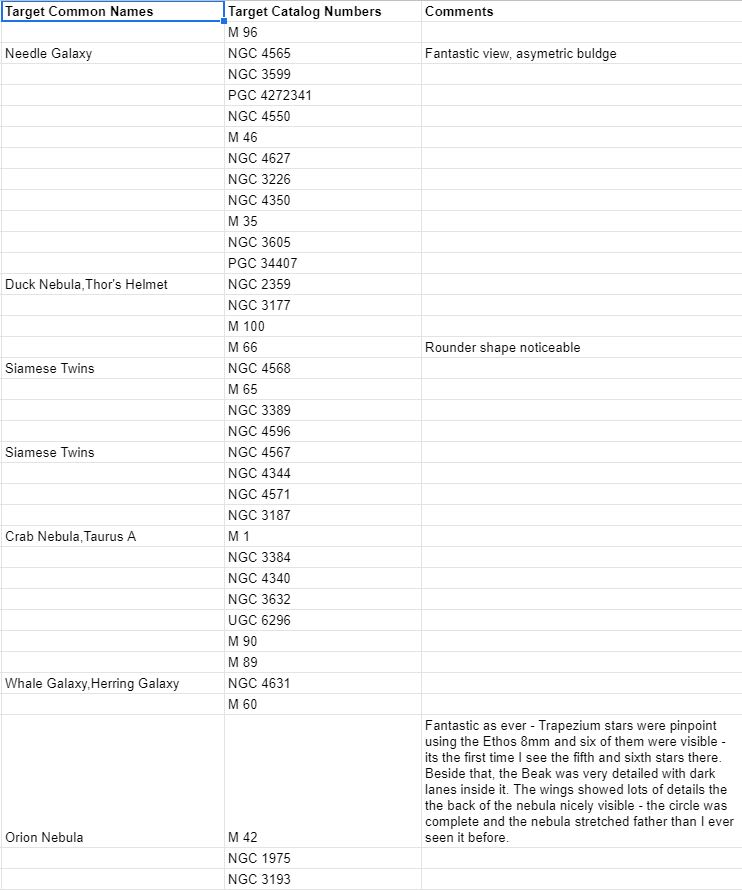 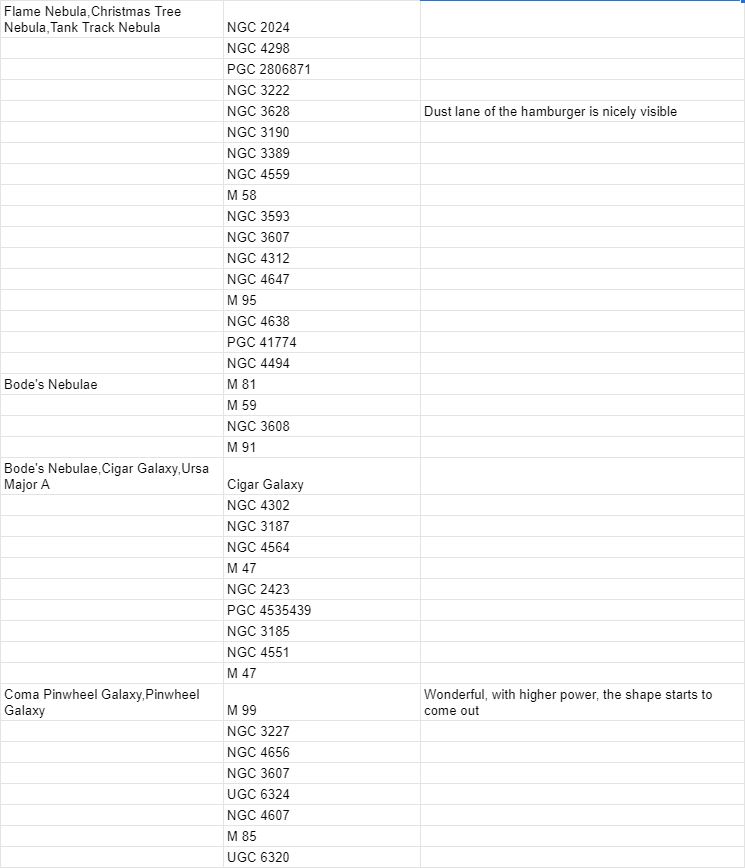 What an amazing session and an even more impressive log!

I am going to school on this one!  Thanks for a great report, ilan.  Bookmarked.

Thanks for “taking us with you!” The pictures, Star chart segments, and list of objects at the end that accompanied your text really helped me feel a part of your excellent session - especially when the wind chill here is -25 deg F!

Talk about a dark sky site.  That looked incredible; you're very fortunate to have that available to you!  Thanks for sharing.

I am going to school on this one!  Thanks for a great report, ilan.  Bookmarked.

Thank you very much! Happy to hear you enjoyed it

Talk about a dark sky site.  That looked incredible; you're very fortunate to have that available to you!  Thanks for sharing.

Thank you, Its a fun to share such experience.

Its a wonderful site, high and relatively far from light pollution. It serves as the main location for our excellent astrophotography community

Thanks for “taking us with you!” The pictures, Star chart segments, and list of objects at the end that accompanied your text really helped me feel a part of your excellent session - especially when the wind chill here is -25 deg F!

Sure thing, its a pleasure to document these sessions and fun to share.

What an amazing session and an even more impressive log!

Thank you. I was surprised by the number of objects recorded. During the observation I was so absorbed in the sky. We were only two people there, both our minds set on the wonders of the sky and it's easy to loose count.

Wonderful report and a great observing session Ilan! I have yet to get out this galaxy season and well may miss it due to weather, moon, and recovering shoulder.

Wonderful report and a great observing session Ilan! I have yet to get out this galaxy season and well may miss it due to weather, moon, and recovering shoulder.

Ah! we had a small argument about it during the session but I seemed a small matter

. Its logical - the head come up first!

You still have the time to get these galaxies, Leo and Virgo are rising late, I wish you have clear skies and the chance to observe them

Sure thing, its a pleasure to document these sessions and fun to share.

Well, we will be single digits to teens for high temperatures (Fahrenheit) for all of this week. That means at night we are anywhere between -10deg F to -30deg F for wind chills in the morning.

Hopefully not much longer.

And I have been lucky to get NGC 3262 so far this weekend before the clouds rolled in.

Thank you for reminding me there really is a sky up there full of DSOs. esp. since M.46 & the PN had been on my observing list, yet I managed to get clouded out 3 nights in a row!

Weather this time of year is nasty here as well. There are clouds/moon/100% humidity/wind or all together

good you got a glimpse of that galaxy. Its too low for my geographic location, reaching 10-20 degrees above the horizon.

Man that scope is a beauty!!!!

Man that scope is a beauty!!!!