what can you see with a Sears/Towa 60mm

Hope you like it!  I had mine out this morning looking for sunspots.  I really love the portability of the 60mm scopes. Mine is just a run-of-the-mill Towa, but with some decent Kellner. 965s is very pleasant to use.  I also have the Parks hybrid diagonal.   I've tried that diagonal in my 100mm f/13 scope, and it held its own just fine, so it's definitely good enough for my little guy 60mm.

The trick, I've found,  is not to compare it with other, bigger scopes, but let it be what it is and see what it will show you.  There is always a bigger telescope, but what can you do with your 60mm?  Just have fun with it!

One upgrade that I really have appreciated is a red dot finder.  The Orion finder shoe fit in the same bolt holes as the original finder. Not having to find things upside down and backwards really upped the usability of this scope for me.

“The trick, I've found,  is not to compare it with other, bigger scopes, but let it be what it is and see what it will show you.  There is always a bigger telescope, but what can you do with your 60mm?  Just have fun with it!”

This is certainly sage advice! There’s a certain ‘zen’ to using a 60mm refractor and I’ve never seen it expressed any better!

This is the scope. I tried it out terrestrially with a 32mm TV plossl and the optics seem OK, better than with the supplied EPs. It's clear right now, if it stays that way I'll take it out tonight. It would be nice try Saturn before sunrise, but it's supposed to snow again tomorrow, so that might have to wait.

As for, "There's always a bigger telescope." That reminds me of a kid I used to play pool with. He was very good and went on to have a career playing pool. One day, when talking about his game, he said to me, "It doesn't matter how good you are, there's always somebody better." I thought that was a pretty impressive insight coming from a 19 year old.

I have bigger telescopes, including a 7" f15 mak, but who knows, maybe this little Sears scope is the right answer for quick views of planets and the moon. The mak takes forever to cool down.

Anyway, thanks for all your input.

Nice kit! Your scope and mount look very similar if not identical to mine, except you've got that nifty finderscope.  Your objective may be better - mine is nothing to write home about but gets the job done.  I've heard the Sears scopes tended to more likely to be the "good" ones.

I envy your box of accessories.   I found my scope in a junk shop hidden between the used clothing racks, and the only accessories I got were moth casings....  I'm guessing you know the porro prism would not normally be used along with the diagonal,  but it does make an interesting way to display them both?  The mount converts to alt-az with the turn of one bolt, which makes it a nice "switch hitter" for times when you don't need the EQ set up (like if you're using the porro prism to look at wildlife or search for pirates at the beach.) I love the old planisphere - bet it still works!  Thanks for sharing.  We all take shameless vicarious pleasure when someone unpacks one of these old beauties!  You might have something really unique and cool in that box.  Enjoy!

I think with a porro prism and a star diagonal combined, you can see things inside-out , lol.

That's a photo from a couple of years ago when I first assembled it. I just put everything that was in the box on the scope like an overloaded christmas tree.

I've heard other people say nice things about the finder scope, but I'm not sure why. It's fun and quirky, but not very useful. Shifting from finder to eyepiece causes movement that makes the finder almost obsolete.

The objective appears to be in good shape. When I bought the telescope, it was as you see in the boxed photo; everything was in it's original plastic bags and put away neatly. It was either meticulously cared for or just never used. Either way, it's a bit of a time capsule.

The clouds rolled in at sunset, so I won't be seeing anything tonight. I did set it up terrestrially today, I did a side by side comparison with an f7 AT80ed using a televue 32mm plossl and matching barlow in the AT and the same eyepiece without the barlow in the Sears scope to even out the magnification, I didn't notice much of a different in the optics, but that was in the middle of the day, so I don't know what that means at night.

I do hope to use it soon. I would like a decent longer focal length for planets.This one will necessarily show tinier and dimmer images than the mak, but might be just the thing for partly cloudy evenings when I don't want to commit to moving 60lbs of gear in and out of the house.

Also, it reminds me of being a kid. The older I get, the more important that feeling becomes.

I envy your box of accessories.

Also, If there's anything you need out of the accessories, send me a message and I'll be happy to send them to you if I don't intend to using them. If you want the porro prism, the original EPs, the sun reflector shield contraption, the tripod speader and light, or the barlow... they're yours. I just want the tripod, OTA, slow motion cables, counter weight and shaft, and diagonal. If you want the box and styrofoam, I can send that as well.

That's very kind of you!  I think what I meant by "vicarious" was that we get to enjoy seeing all these things without cluttering up our own houses with them!

When I picked up my 60mm as a "clunker", it was mostly as a challenge to see if I could get it working properly.  Later I became interested in actually kitting it out and it's been fun doing that.  I'd encourage you to hang on to your box o' stuff for a while; you may find uses and enjoyment from things in there that seem pointless or useless today.

For instance, I'm guessing there are eyepieces in there, and I'm guessing they are Huygens.  So you may look and say "trash, I'll get rid of those." But hold on. Whenever someone starts this hobby, we always tell them "get some Plossls, get 1.25" and that's really sound advice to give a newbie.  But have you ever actually tried a Huygens, especially in a long-focus refractor?  This scope could open up a whole new understanding of how these various eyepiece designs really function -- that's what mine did for me.  Like any new thing, it was frustrating at first because I didn't understand the parameters of this ancient eyepiece design (obsolete? Maybe, but it's been around for centuries. Why do you think that is...?)  Today I use .965 Kellners and orthos in my 60mm kit, but enjoyed playing around with the Huygens and I still have some of my favorites. The 23mm in particular is nice for doing eyepiece projection.  And I have a much better appreciation for the different designs and their advantages and limitations.

So, just a thought. You've got a classic, and relatively "famous" one.  Even funky viewfinder has its place -- you could try to remove it, or just stick a red dot finder on there and let the scope remain its "classic" self. Everyone has a regular scope -- yours is special.  As long as you can get it into a condition where you can use it comfortably, I'd encourage you to go slow, take a few months or a year to get to know all those foam-packed accessories, and let the telescope lead you down an astronomical path you may never have realized was there.... And some of those accessories will go like hotcakes on CN classifieds, which tells you that if you get rid of them now, you may have a tough time getting them back if you want them later.  Just something to think about.

My Meade model 291 can resolve the 'Perforated Thingy' it's a Towa product, and I'll admit

I'm a little shocked, it takes a good 4 inch to resolve the perforated thingy.

Red arrow, I can't photograph the perforations in the gray cylinder. It's 2-1/2 miles from my 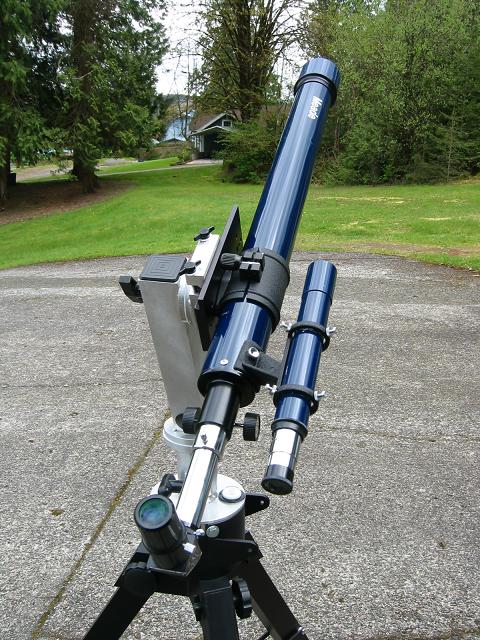 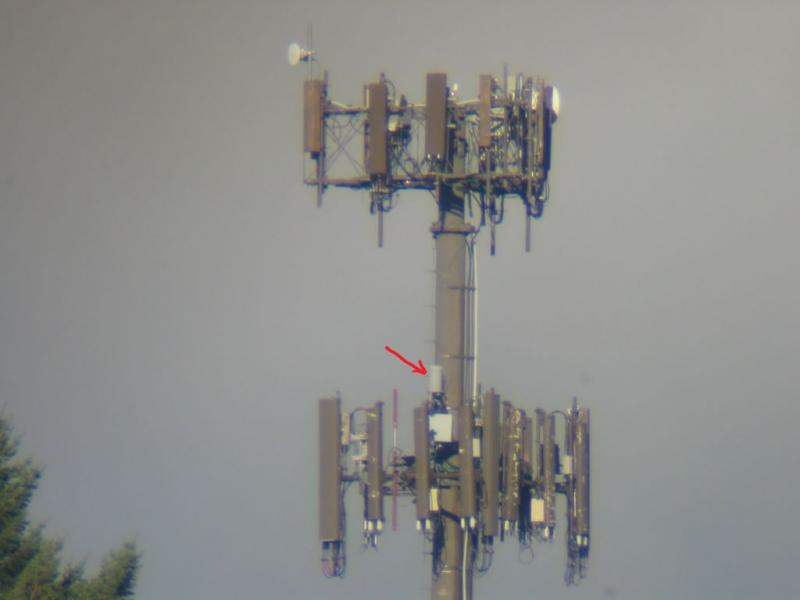