Hello! Here's a copy of a post I just posted in the AAVSO forum:

I'm quite new in the variable star business, though I've been an amateur astronomer for over three decades. I've been visually estimating variables for about a year now. Last night, February 14th, 20.40 UT, I was trying to estimate the brightness of AA Aurigae with a 12" dobsonian at 90x and 169x, when I noticed something was off. Star 122 on the chart (X26200BCF) was as bright, or even a hair brighter, than 114! It was much brighter than stars 125 and 127. AA Aur itself was a little fainter than 114, but 122 was brighter than it, which obviously doesn't make sense.

So, obviously something is wrong here, if I'm not mistaken. A quick look at Digitized Sky Survey seems to show that 122 was indeed fainter than 114 at that time.

It's overcast here tonight and will likely be for the whole week, so I can't take another look until it clears again.

I ask of you to go out and take a look at the stars 114 and 122 near AA Aur (and of course also AA Aur, now that you're there anyway) and let me know what you see. 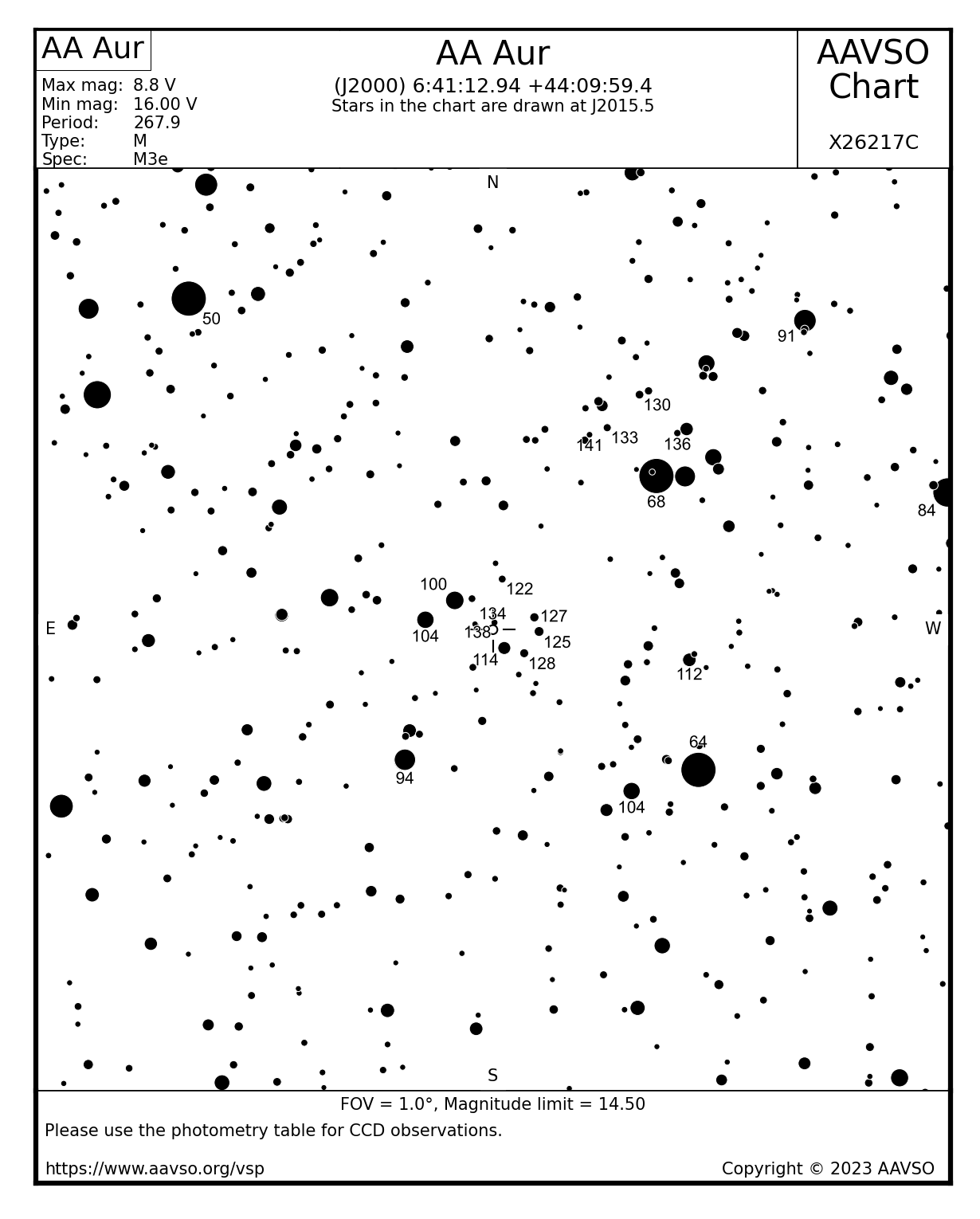 Were you sing a V filter? Could 114 be redder and be perceived as dimmer visually? Those charts are V magnitudes.

Were you sing a V filter? Could 114 be redder and be perceived as dimmer visually? Those charts are V magnitudes.

I was observing visually, so I guess you could say I was using a V filter...

As stated in the OP, I was using a 12", so all the stars were easily, continuously visible and not just intermittently glimpsed.

The "50" just means the star is mag 5m0, it has no connection to star names or designations.

AAVSO urges me to report the observation. They didn't specify where, but presumably AT. How do I do that? Or do I need to do it somewhere else?

That star (GSC 02953-01495) is actually a close double, according to GAIA EDR3 (which puts the two stars about 1/2 arcsecond apart). And, as the old AAVSO chart indicates (also captured in the AAVSO VSX database), at one time it was a suspected variable. There are actually a lot of V-band photometry measurements in the AAVSO database, showing some "odd" behavior (mostly dimming). My own review a few minutes ago of ASAS-SN and ZTF monitoring of this star over the past few years doesn't show anything particularly interesting (although the ZTF periodogram has a peak at a period of about 45.25 days, and the "periodicity" in the data is a brightening with that cycle).

Clearly, though, it would seem to be worth some long-term continued monitoring.

It's apparently a known variable, though extremely obscure, but why has AAVSO then used it as a comparison star???

As a person and AAVSO member, I know this well personally!

Currently trying to get a remote scope on it. Hopefully it's still in eruption. If it's brighter than 12m2, then that would nail it.

Sadly, the images showed nothing unusual. It was, however, immediately and strikingly obvious to me that the field now looks different, than on February 14th, simply because the star is now fainter.

Thomas -I tried to image the star field on the night of your post, but the star was virtually at my Zenith.

After only two minutes of trying I had to give up as the pain in my spine was just to bad. Observing objects

at the Zenith is a real problem for me nowadays. When the star field is better placed I will add it to my  list

of objects to monitor.

Haven't seen one of those charts in a long time.

It may be interesting to find out
a time of first reported brightening.
The star is GSC 02953-01495 and
reported in AAVSO OBS.
It may not be a binary (?) but
short period of "lensing effect".
Similar (but much shorter duration) to GSC 03656-01328.
Best wishes to all
KMA

On 2-21-21, I imaged the area of AA Aur with the Slooh Canary 2 wide field scope and it appears normal. I would be interested in reimaging the area for possible changes in brightness.