Hey folks, wanted to share an adjustment I did to my Celestron Basic C8's RA clock drive motor, and get feedback on how people think this should be done/how the system should be set up.

Basically, long story short, how deep should the teeth of the RA motor output gear be meshed with the big ring gear that drives the polar axis? Has anyone else noticed that this relationship gets screwed up due to polar axis sag? I relate in gory detail below what I ended up doing, but if anyone has an opinion on this, feel free to reply without reading all that if you don't want to.

The specific scope: this is the spur gear drive, not the worm drive, most basic Celestar 8. 1999 vintage, DC motor/hall sensors, powered by a 9V battery.

After disassembling my mount's polar axis (for other reasons) I discovered that the RA drive motor's pinion gear was pressed against the polar axis ring gear ridiculously hard. Now I finally understood why I'd never needed to engage the RA drive clutch to get the telescope to track! There was so much friction between the ring and the hub that the scope tracked, with a big unbalanced finder and eyepiece/diagonal, with the clutch completely out! Woah! That can't be good.

I emailed Celestron about proper adjustment of this gear mesh, but they didn't answer me at all. I guess after 21 years I'm not a customer anymore...

The adjustment seemed wrong, given that I discovered:

a) darkening of the grease between the gear and the fork hub due to wear, after only perhaps 10-20 night's use in the scope's life (yes this is sad, I'm now regularly putting this puppy to work!), and;

b) there was still plenty of gear lash in the clock drive, no matter how hard that gear was pressed up against there, so there didn't seem to be a good reason for the high pressure. The majority of the gear lash seemed to be inside of the RA motor's gear box, not in the mesh between pinion and ring gear.

So I loosened one of the motor mounting bracket holding screws, and twisted the motor bracket back; the gear was now still in full contact with the ring gear (a condition which would be considered "over-meshed" in normal gearing system design, but maybe that's how it's supposed to be here? maybe they're trying to remove lash?) but it was no longer applying any significant pressure. I felt super free, smooth manual RA slewing where before it'd been sticky and stiff. Very excited!

This excitement remained only until the next night when I mounted the scope on the wedgepod. When I actually used the scope, I was surprised to feel that RA adjustment was again tight and sticky. And it became way worse after I mounted a new counterweight.

Huh, well, this must be polar axis sag! The weight must be deflecting the whole polar axle sideways, and jamming the ring gear into the poor motor pinion. I'd seen how dinky the wall thickness of those fork and base castings was. I mounted a pointer wire to the bottom holding bolt, where the polar axle is bolted to the base casting, and I could see that when I pulled down on the scope with a pound or two, the whole polar axle's central mounting area of the casting was deflecting. The polar axle was also bending a bit too. Seems like about half of the floppiness comes from the axle bending, and half from the base casting deflecting. Overall the deflection amounts to about 3mm at the tip of the forks with two pounds' weight (referred to a pointer wire attached to the base of the mount, making sure no deflection of the wedgepod was registered).

Great. Well, I went ahead and loosened the holding screw again, and again backed the motor away from the ring gear, with all the gear mounted to the scope and the wedge set for my latitude. But this is pretty unsatisfying. If I ever change the weight of accessories on the scope, the gear mesh will change.

I get that this isn't a precision astrophotography mount... but dang, that's sucky! I know that the worm drive version of the same vintage of mount has a spring that presses the worm into engagement with the ring with constant force. Seems like that'd be a nice feature here too, but it'd be a ton of work to retrofit that into there. Whole new mounting bracket.... for a scope that's now worth what, $400?

Anybody else noticed this? Any remedies? 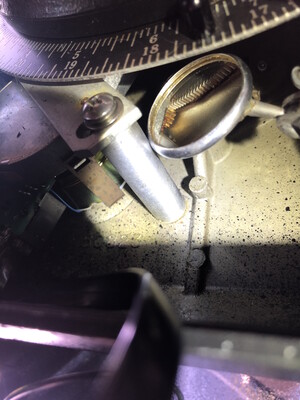 Sorry for potato quality, but the gear mesh in question is visible in the inspection mirror I'm holding in there, and the screw I loosened to move the motor is visible blurry/poorly exposed in the foreground. There's another screw, irritatingly covered by the RA setting circle which makes nice adjustment difficult. I just pulled back hard enough on the overly beefy steel bracket until the other hidden screw slipped, and then pressed the accessible side of the bracket into the place I wanted it while tightening down the accessible screw.

I've got the exact same scope as you and recently opened it up like you and wondered the same thing. I'm not sure how tightly the gear meshed to start with (I didn't check and then when I put it back together I just rammed it as tight as possible). But now I notice that there's some erratic RA errors every 15-30 seconds or so. (For instance, if I'm doing 15 second subs, half of them look great and tracking is good; the other half have star trails in RA.)

So all that said, I don't have a solution but count me among those wondering what to do with that gear.

Do you have a counterweight? That could help mitigate deflection when you switch to different accessories?