The Orion Nebula is one of the most familiar celestial objects, easily visible to the naked eye below the three stars of the Orion's belt. It is a large cloud of dust and gas, about 25 LY across, illuminated by emission and reflection components.

At the distance of approximately 1350 LY, and only about 3 million years old, the Orion Nebula is one of the closest and youngest stellar nurseries for low and high mass stars. According to recent observations by the European Southern Observatory, the 3000 stars in the Orion Nebula Cluster did not form continuously or simultaneously, but are divided by age into three distinct populations, most likely as the result of shockwaves and stellar winds from nearby supernovas. Due to its proximity, on amateur photographs the cluster reveals a large proportion of red dwarfs which are normally present but not detectable in distant clusters because of their low luminosity. Hubble photographs reveal a profusion of arcs, jets, pillars, protoplanetary discs, and numerous brown dwarfs: substellar objects, unable to sustain nuclear fusion, and which emit light due to heat released by gravitational contraction.

The first known observing record of the nebula was made by Fabri de Peiresc in 1610, while the first published record appears in 1619 by Johann Baptist Cysat. In 1617 Galileo documented observations of the Trapezium Cluster, but did not mention the surrounding nebulosity. That the nebula is also never mentioned by the ancient astronomers has lead to the speculation that it has recently increased in luminosity. In 1774 Messier included the object as the 42d entry in his catalog of deep sky objects. The small, fainter section on the N side of the main nebula he listed as M43. 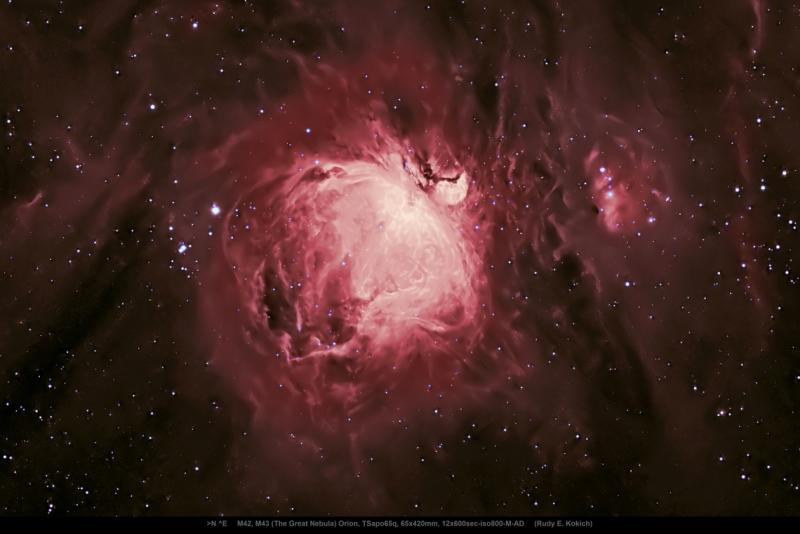 It's a beautiful image!