My happiness from purchasing "excellent condition" EM-11 on eBay wasn't for long... First night out, and I hear loud knocking sounds when the mount is tracking at some positions. When using RA buttons at slow slew, I can hear awful squeaking noise resonating throughout the mount. Whenever the mount knocks, the star jerks in the eyepiece. The seller refused the refund, so I now have this project on hands.

Disassembled the mount, everything appears to be fine visually except the RA worm - when I turn it on its axis by hand in the carrier (see pic below) I can feel the motion is not smooth but jerky, as if there are "notches" in the bearings. Do you think I should try to replace both bearings? Could it be the worm axis itself is bent or it's less likely?

Any advice would be much appreciated. This is a hard lesson for me - never buy anything astronomical on eBay. 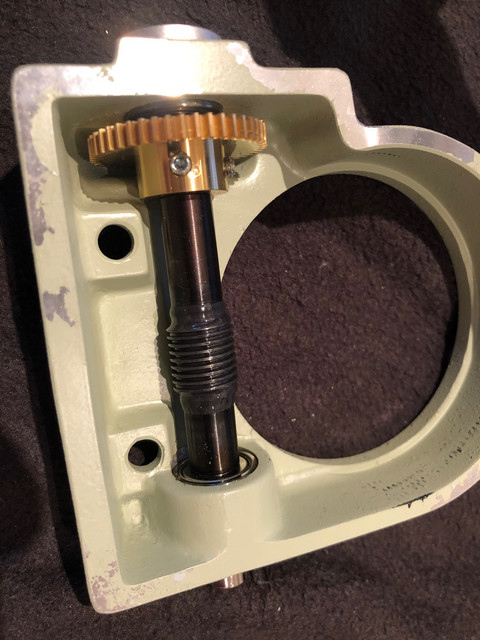 You should be able to turn the worm gear by hand and feel if the bearings are bad. Put a little side pressure on it from different angles. If either is bad you'll feel it.

I can turn the gear by hand. There's no play anywhere, but the axis feels stuck in some positions, the motion is somewhat jerky. I'll get the bearings out and will try them one by one. Also, the gear that connects to the motor gear is absolutely dry - you can see that on the pic above. I wonder if it should be lubricated. Any hints would be much appreciated. The owner swears he didn't touch the mount but I don't believe him - there are no screws in some places, the encoder bracket is snapped, one of the encoders has wires snapped - total disaster overall.

Bearings are so cheap, if you're going to take them out replace both while you're at it.

The gear that connects to the motor does not need lube. The worm does.

Thanks for the advice, Couder.

Definitely replace the worm bearings.  The ones you have are damaged or defective.  Be sure not to put too much preload on the new ones.

With your help it appears the mount is fixed. The issue was the preload adjustment, but from the other end of the axis, where the encoder is. Just a 1/4th of a turn of the ring with circlip pliers and everything is back to smooth. Thank you very much Couder, EFT and orlyandico. Can't wait for the first trip out with it.

You actually may want to put thread lock on that ring, because by rotating it you broke the existing thread lock. The ring may slowly work loose causing ever-increasing backlash (because once it gets looser, the worm can move back and forth in the carrier).

How did you fix the encoder issues? it may be that the mount got damaged in shipping. Takahashi's kludge bolt-on method of putting on those encoders with the exposed wires and thin metal bracket are a disaster waiting to happen.

Geez. I'll keep an eye on it. There is the encoder "adapter" that covers the ring, so it shouldn't fall off completely, but if I'll see backlash increasing I'll remember this advice. Thanks for mentioning this.

I haven't fixed the encoder yet. Requested local Takahashi dealer to quote me a new encoder and bracket, still waiting for it. I'll run it without encoder for now. It is unlikely it was damaged in shipping, as I have asked the seller to pack it in a Pelican case, and it arrived intact. They also admitted they tried to remove the Temma box, although they refuse to reveal the reasons, so I guess that was done in a barbarian way which caused the bracket to snap.

I agree it's an odd decision for such a high-end mount to have encoders outside with exposed wires. And the wires are really thin! I don't see that on Temma 3 - I guess they found a way to put them inside.