Finally clear sky for me!

Lastly I fed final image to the topaz Denoise AI 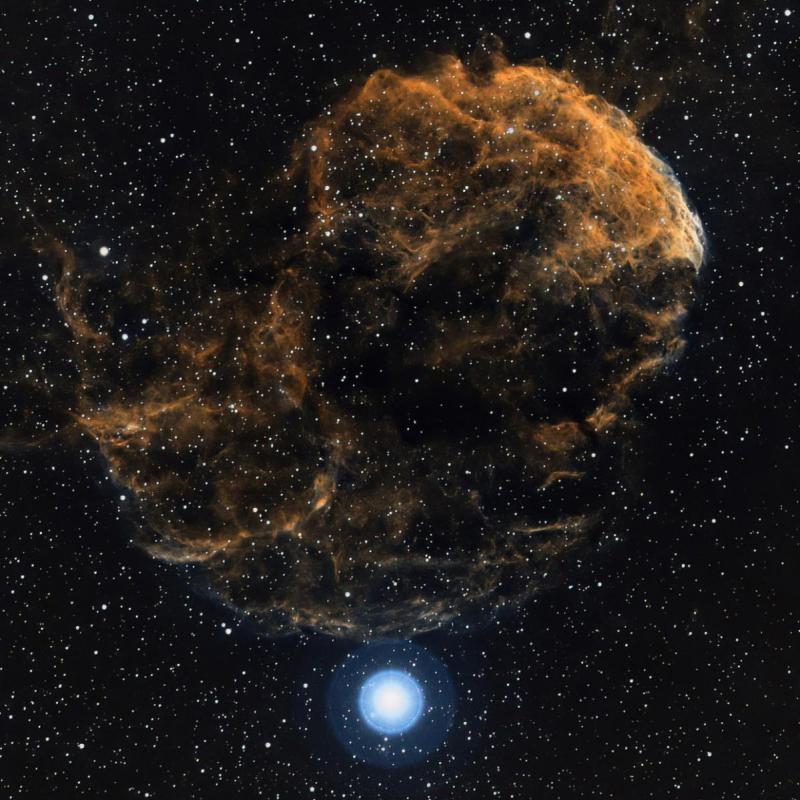 Below is my entry for the IC443 - Jellyfish Nebula:

Had alot of problems imaging this target this month.  The original plan was to image during the new moon at my remote dark site, but the weather did not cooperate.  first light with my new Optolong L-eNhance Narrowband filter. From my Light polluted backyard. 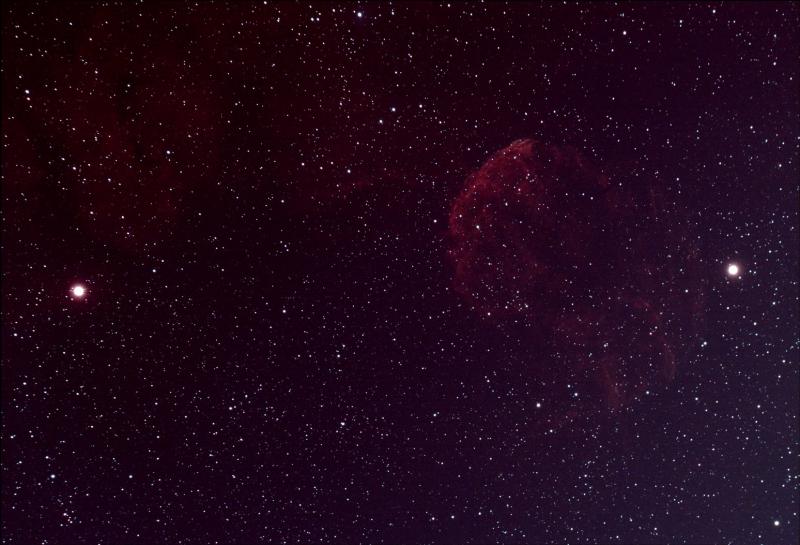 Late entry from shipping delays. New filters got here yesterday. I was able to get a scant 120 minutes on the Jelly under a 99% moon. No flats or flat darks. I was hoping to get more tonight but the high clouds rolling in.

Also a late entry - in my case due to overcast skies and then moon issues. I have my imaging rig configured for galaxy season so this is a closer crop than I would normally do due to the longer focal length setup. Also, I only have a 5 position filter wheel so the only narrow band filter I have mounted in my filter wheel is Ha, all other filters are broad band for the galaxies. Hence the HaRGB result. 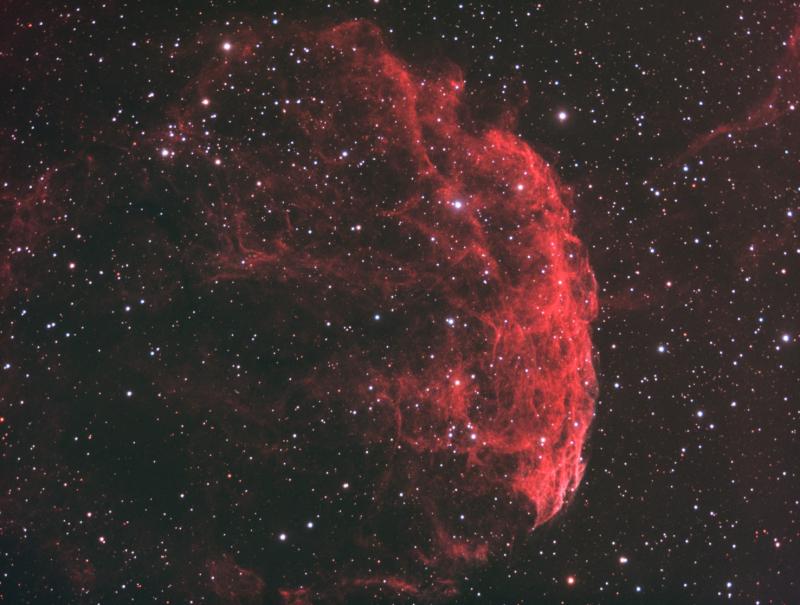 I just saw this post but am excited to finally participate! 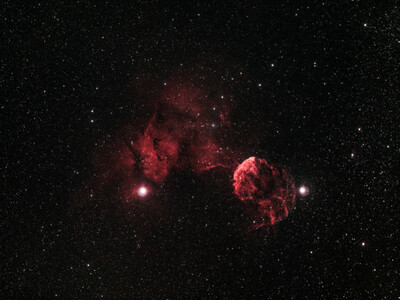 So, taking this a bit down to the wire, hoping for more than one night of data.  I finally got that second session last night, which netted some interesting experimental data, along with more on this month's Challenge as well.  What I ended up with is a bit of a "Frankenstein" in its content, due in part to that experiment.  (I guess you mono imagers call this "normal process"

The first night, 4-March, was a "get something in the can" event, just to learn a bit about the target.  I'd never imaged it before, and it's the first of this type with the cooled CMOS camera.  So, no filters, just grab the image.  In that first session I managed 1hr 24 min of 4 minute subs, and got an OK image; nothing great.  After playing with different stacking methods in DSS, I tried stacking the data with ASTAP, and got a significantly better treatment to the background noise.  Unexpected, but welcomed.  Good enough to post, I suppose, if that's all I could get.  Then we got weather, and the Moon and weather together.

Last night the weather cleared, and the Moon was full, but in a different enough part of the sky that I thought it might work.  With the contingency image in hand, let's experiment!  I threw on the Astronomik UHC-2 filter, to see how well it did with the Nebula's structure in the presence of the Moon.  Surprisingly, I didn't have to change the exposure from my "regular" settings.  That probably means something worth understanding, but I haven't had a chance to digest it.

Due to some technical issues (I'm still fighting with the USB 3.0 Hub killing off my imaging camera), I only got 32 minutes with the filter.  Processed alone, they weren't half bad, comparing favorably in some regards to the longer-integration no-filter image.  Taking both sessions into DSS for stacking (it does a good job at organizing multiple sessions), the results were different than the base image; better in some ways but worse in others.  Throwing caution to the wind (er, stars?), I threw everything into ASTAP's stacking page.  All the Lights were lumped together, as were both pairs of Flat / Dark-flat sessions.  No clue what it would do with the motley mix, but somehow the results were better than either single night, and what was done with DSS' carefully organized tabs.  StarTools processing brought out the added deep red that I never got with my old Nikon, likely enhanced by the additional integration time with the UHC filter.  Attached, below.

Final experiments included grabbing about a dozen images binned 1x1 instead of my usual 2x2 in-camera.  After processing (including a software 2x2 bin), the result was about the same as the pre-binned image, confirming that the savings in space, and the shorter download time is a net benefit to binning in the camera.

Finally, this is another it-barely-fit image (only cropped for very slight stacking artifacts), suggesting that my next upgrade (after Galaxy season) should be a reducer / flattener.

Stacked with ASTAP on Linux PC (not the Raspberry Pi!), processed with StarTools

Here's my very late entry. Still trying to get a handle on PixInsight, another night of post-processing would've been useful.

Here's my very late entry. Still trying to get a handle on PixInsight, another night of post-processing would've been useful.

Hooray, another blue one!

So here's my contribution, the first (and so far only

) data with the new 2600MM.  But, as I only had 31mm filters available, I only recorded an MFT-sized center part.  Not too much data either, as the target was already past zenith after dusk, and vanished behind some building early.... 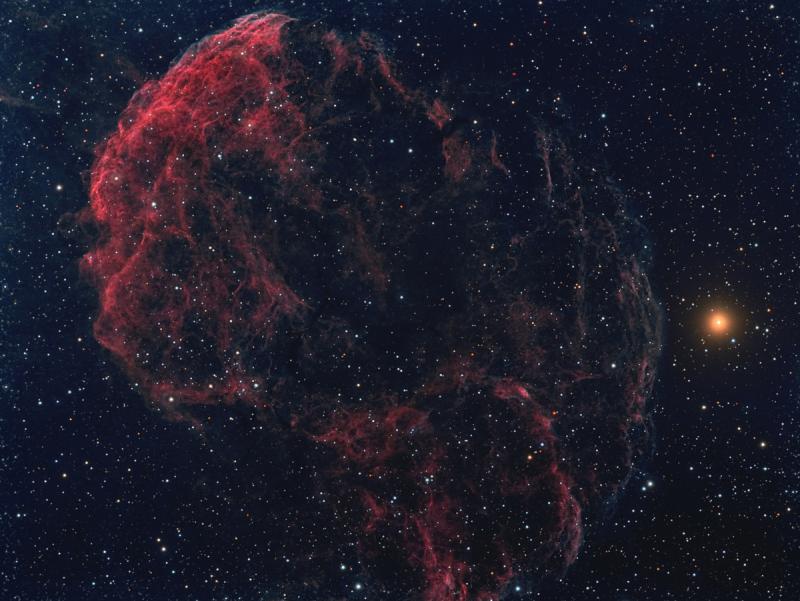 Hooray, another blue one!

Totally, that deep blue somehow pops off the background!  I'm gonna do a purplish-pinkish one eventually, one that looks like a real jelly in the sky!

110x60" subs on Meade 6000 80mm apo with Canon Ra. Stacked and processed in pixinsight and Gimp. Going out tonight to get another couple hours! What a cool target. Wish I could fit monkey head in there.

Adding to the flurry of late entries...

I wasn't sure I'd be able to enter much of anything this time.  When all I had after the first night was a somewhat red banana shape, I had nightmares of NGC1499 again.

Weather was also a real pill.  If it wasn't cloudy, it was outright raining from cold, late winter storms.  Or 50mph Santa Ana winds.  By the time that all started clearing up, the moon was coming back.  And has it been mentioned we picked a target that is setting in the trees shortly after sunset?  Yes.  I think it has.

But nonetheless it was still a good month, particularly with hardware.  My lens cell modification is producing vastly improved star halos.  My (v 2.0) DIY rigged-up guidescope and guiding camera with PHD2 on a resurrected laptop actually seems to be working, and this target is 100% guided - my first ever experience with that.  Finally I souped up my main laptop, and stuffed SSD's into all my computers.  Stacking and processing is a whole lot faster now.

Oh, and I bought a filter too.

I could have obtained more time with the filter the past couple nights as it has been clear.  I needed more time.  But the month was running short and I had to figure out how to composite it all together.  The end result is a bit on the clumpy side, usually a strong indication I don't have enough integration.  Still, as proof of concept I'm good with it, and was quite pleased to see the shape of the Jellyfish start to show up, in less time than I had on target unfiltered, and under a full moon to boot.

For this one, unfiltered and filtered data were fully processed separately, the filtered being only the extracted red channel, then layer blended with a mask plus an inverse mask on the stars so that they did not have their color balance upset.  I'll have to practice this and the other ways of extracting and compositing duo band data. 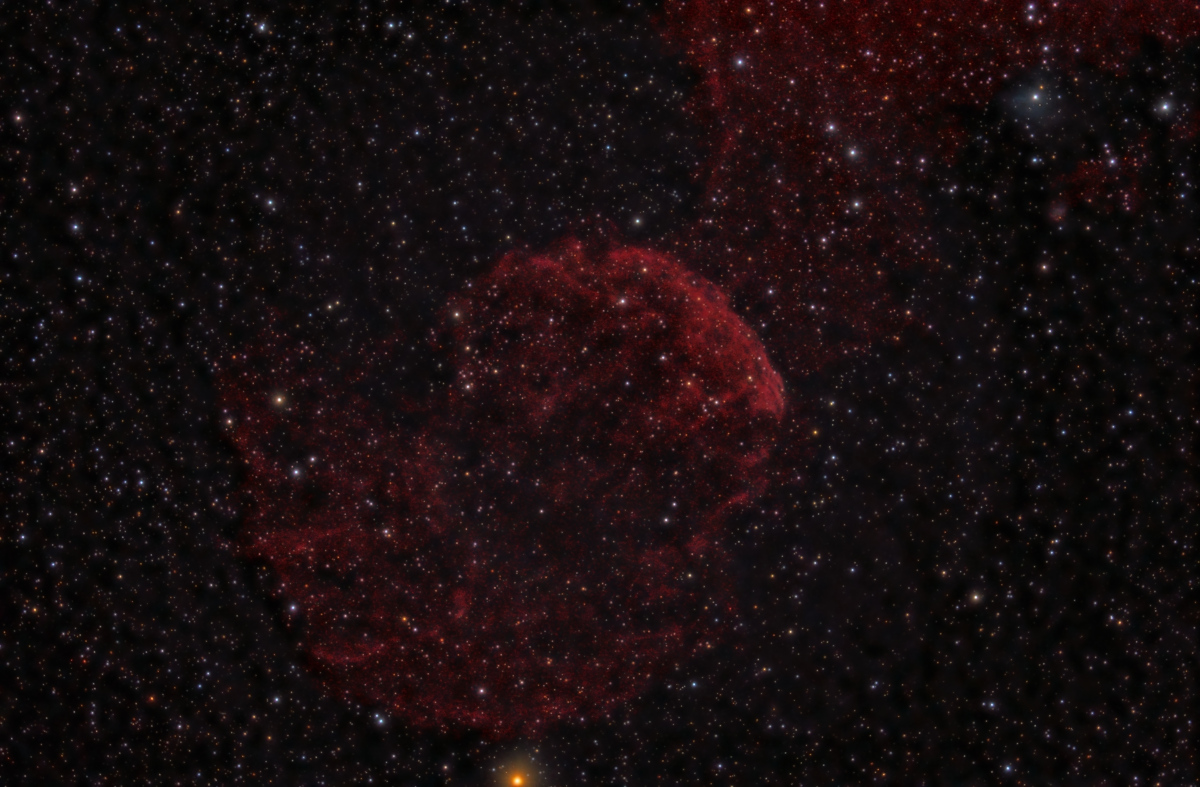 Not sure what those black blotches are about, they moved around.  I heard a bug buzzing around, and it may have been hanging around on the objective! Click on the image for a 25% resize of the original. 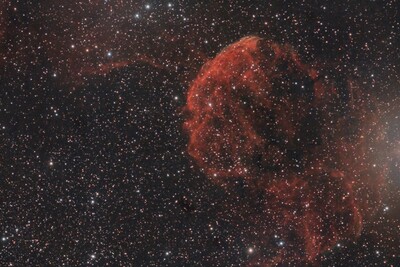 Thank you to everyone who participated. There were a lot on entries this month! I take it no one spent their stimulus checks on telescope stuff since apparently the clouds stayed away for a lot of you

New challenge is up. Thanks again for all who participated. This was a funny month with so many great images to look through.