Is it just this "simple"?

So I have, since being a kid in the early '80s, wanted to shoot a few DSOs on film and check that off my bucket list.

I have a roll of E100 and a Pentax K1000, appropriate t-ring, and a shutter release cable. I have some substantial experience shooting with DSLRs and astro cameras, landscape, deep sky and planetary/lunar.

I want to take some images with both my Stellarvue 80mm APO and my 8" Celestron SCT.

2) The APO with the reducer shoots at a pretty fast ratio, but I'd need to crop a scanned image because the field brightness would fall off and the stars would start to elongate substantially. Is this a reasonable thing to try with something like a galaxy? Speed traded off for loss of field? I am assuming similar principles apply to film emulsion molecules as to pixels?
3) A similar question applies for the SCT. Endemically it's F/10, and SCT fields aren't great at the edges anyway. I am assuming I could apply similar logic to the reduced SCT as for the reduced APO regarding cropping a final scanned slide image?

I am aware of reciprocity failure, that if I was really going to do everything the best way possible I would hypersensitize the film and shoot with a cold camera. Unless you all tell me I'll get no result without doing those things, I want to keep this all as simple as possible.

I don't think I'll be able to catch Orion nebula this year because of weather, but if this goes at all well, I may try again next year.

Other targets I am considering: M81, M51, M45, any other good suggestions coming up in the sky through next month?

Thanks for any advice!

For film Deep Sky, exposures in the hour or more range are most sensible; and Hydrogen Hypered makes a huge difference. No need to cool the film, that won't really add anything more than the hydrogen already provides. Some films hyper well, some not at all. Back when I was doing that at F/6 1900mm EFL... most of my Deep Sky exposures were 120-300 minutes. For such long exposures, a great tracking mount with meticulous polar alignment are essential. I captured many hundreds of ~successful~ images that way back in the 1980s. It was a lot of fun --- and a lot of work! The first couple hundred I did the guide correction manually!

I would research the differences between film and a CCD cameras and see if the ISO's can be matched.

Then I would take some test shots with the DSLR first at the settings you desire, making sure the focus settings and "f" stops match, or are adjusted for the differences.

Then account for that I would take the shots.

The problem with film is you won't know if it came out like you wanted until it is developed.

Do some research on old photographic techniques. What you will have going for you, is a good guide camera and computer.

In the early days, it was a shot in the dark...

With the SCT you will need to off axis guide and use your reducer to keep the exposure time under 2 hrs.

If you look through this section you will find many images done on film..

With the SCT you will need to off axis guide and use your reducer to keep the exposure time under 2 hrs.

If you look through this section you will find many images done on film..

This is super helpful. Thanks!

I do use an OAG on the SCT.

Please keep in mind: The possible exposure time depends strongly on the sky brightness. If you make your first experiments at your home that may be s suburban place with an amount of light pollution. I have here an fst of around 5 mag, be be slightly more. In the zenit!. In this case I can go as far as 5 ... 10 Minutes at f/8 (which is similar to your f/6). In my rural place I have fst around 6 to 6.5 (SQM reading around 21). Here I can go as far as an hour at f/8. For such long times the Schwarzschild coefficient plays an important role. It may even be, that a 100 asa film with a low coefficient is in effect faster than a 400 asa film with a bad one. You need some experimenting.

If you dare t develop b7w film I recommend to start with that. YOu can develop every smal piece of film separate and learn from every evening. Normally, color film hast to be given to a lab. I process bw films and paper in my own lab sicnce nearly 50 years. You may ask me questions about that.

You should give the film the amount of light it need to have at least some background density. A background with a density of around 0.3 .. 0.5 gives the most contrast of weak detail.

Anthony I used to do a lot with colour slide film in the 80's, though my preference was Ektachrome 400 and sometimes pushed it a stop to ISO800, and I mostly used a 6" f/5 newtonian.

Was it just this "simple" ? No, it wasn't - in that era mounts didn't have polarscopes - you had to use other time-consuming methods to align an equatorial mount; it was rare to have electric dec drive (most were manual, with a tangent arm), no GOTO, no PEC, no autoguiders - and the really tough part was you had to guide the exposure VISUALLY by eye, through a guide scope with illuminated crosshairs. Hard was an understatement, and if anything screwed up the guiding the image was stuffed. Try keeping a star in the crosshairs at 300X for an hour, in the cold, without bumping the scope. Some guys got so stiff in one position they literally fell off the chair. Worse, you had no idea whether the shot was good or bad until the film was developed and enlarged - hours, days or weeks later.

Reciprocity failure will start to hit E100 at 10 minutes and after 30 minutes it pretty much falls off a cliff; going to 1 hour will be a waste of time.

While all of the things you suggest are reasonable and fun to try - you will get something in 30 minutes or so exposures - ultimately IMHO you're going to be disappointed - film will not go as deep as a modern cooled CMOS sensor can with stacking - using a 70mm APO, my ASI533 goes deeper in 20 minutes (20 x 1 minute frames stacked)  than I could ever achieve with a 6" f/5 newtonian using Ektachrome 400.

As Tom suggests you could hypersensitive film, though my interest had waned by the time that was accessible.

I am just getting back into astrophotography. I used to use film back in the day. I shot with a Nikon camera and a variety of lenses and scopes, ranging from 50 mm lens up to 10" f6.3 LX200. I used hypered film most of the time, but used normal film for eclipses and brighter objects.  I found my best shots were from the 50mm and 500mm Maksuktov piggy backed to the big scope with the main scope as an autoguider.

While I enjoyed using film, I am looking forward to buying a new CMOS unit and knowing if I have results the same night. 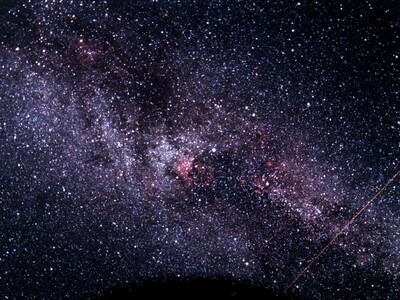 Back in the day, the difference between one film and another in terms of sensitivity to red nebula light was just so great.  I am not sure if any of the films today are really what is needed.  The film speed itself was pretty pointless for gauging the usefulness for AP.  Out of all the films back then, the best I used was ScotchChrome 400.  It seemed to be sensitive in ways no other film of the time was.  There are not so many films available today so I wonder if any even come close.

Anyhow, I feel people gave up on film AP too easily.  It's true that it was harder.  It also was a wonderful experience that gave beautiful results.  I want to get back into it.  I still have my cameras and off-axis guider.  But the cost of film and chemicals is worse than ever.

Many years ago, I photographed some DSO with b7w film. I chose Kodak TMZ which is rated at 3200 ASA. In reality, it has rather 1000 ISO. I got decent results with my 6 inch SCT f/12 with only one minute of exposure time: M13 and M57. I did not try M42. But it is bright and you get a decent image with 1 minute or so too.

It is much easier to get shots form Open Clusters with short times. If you find a way developing your films at your own, I recommend starting with b/w. You see the results the same night, leaning curve is much steeper.

I worked rather sloppy this time, please be lenient toward my photographs.