I have a dilemma I'm trying to solve without going broke.

For the mono camera, I use the Baader UFC system with 50x50mm square Baader f/2 HighSpeed filters.  Narrowband filters on the RASA really should have a shifted bandpass, otherwise you lose too much light with "normal speed" filters.  It has worked great, except Baader still does not have the OIII filter in stock so this camera and filter setup has been next to useless.  Well, that's too harsh -- I have been capturing Ha and SII data, but will have to supplement it with OIII data next year (since my targets are drifting out of season).

For the OSC camera, I have the Celestron Light Pollution Imaging Filter for RASA.  I believe this filter may actually be made by Astrodon, but that could have been a rumor.  Anyway, it seems to be a great filter -- it handles my Bortle 6 skies well, and the colors it produces are pretty natural.  The problem that I have is the Baader UFC telescope adapter is not built to Celestron's custom adapter specs.  It sits flat on the lens group instead of having negative space, so it ends up sitting on top of the Celestron filter ring screwed into the RASA.  This is a horrible oversight, and it means I cannot use UFC with this filter because it introduces spacing and tilt issues.

In a simple world, I would just sell the Celestron filter (as good as it is) and buy a replacement 50x50mm filter for the UFC.  However, I don't see any of those available (such as the Triad Ultra Quadband, which only appears to be available in 65mm square sizes), plus they are not band-shifted to work with ultra-fast optical systems like the RASA.  Am I missing some good options?

I've looked into various other solutions.  I started with PreciseParts.com but I need the solution to be spacing-adjustable.  Then I came up with a PreciseParts adapter that connects to the Baader M68 Varilock, but then that needs an M68 gender changer to the ZWO 68mm tilt adapter that I can't seem to find anywhere.  I could just adapt it to the existing m54 tilt adapter I suppose, but I was hoping to keep everything M68.

I've also looked into some very interesting custom-engineered solutions that also allow precise tilt and spacing adjustment via micrometers... but they are expensive and I'd rather not spend more for an adapter than the filter I'm trying to save.

Anyway, is there some option out there that I am missing?  Other than selling the OSC, of course (I love my mono, but with the RASA able to capture so much light it makes OSC cameras much more practical, especially since I can't mount a filter wheel).

Thanks in a advance.

I'm planning on using these with my C8 RASA.  The filter may be of interest to you.  Note that it's for emission nebulae, ONLY.

I've also used custom PreciseParts adapters, specced to avoid spacers.  I've had no luck with setups requiring spacers, at all.  It's unlikely many are made to adequate standards of parallelism.  The PP adapters have worked, first light with the Artesky last night was very promising.

You are missing a great option, the Astronomik MaxFR. I had them in my 11" V2 RASA in 50x50mm. They are great!

I have exactly the same setup as yourself and use the Astrodon/ Celestron LPR filter with the Precise parts custom adapters that screw over the central camera assembly mounting and fit the Baader UFC dovetail. I think you will be very surprised to learn that most of the tilt introduced into the RASA system comes from the accumulated errors in the adaptors and not the imaging train. You may get away without needing tilt adjustment if your adapters are built with enough quality with regard to maching accuracy.

I ordered the precise parts adaptor at 21 mm for the ASI6200 and using the Baader variable spacer of 15-20mm I was able to dial in a pretty good flat field. I suggest if possible you try and get a compromise on spacing so you can use with more than 1 camera using the variable spacer.

I have a full set of the fast filters for the RASA that I purchased a few years back and these work very well with the mono ASI6200 camera.

I've shown the adaptor I use below. 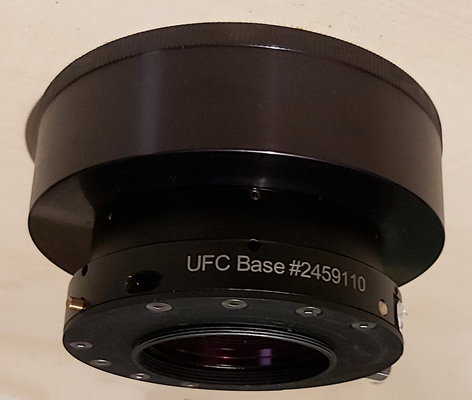 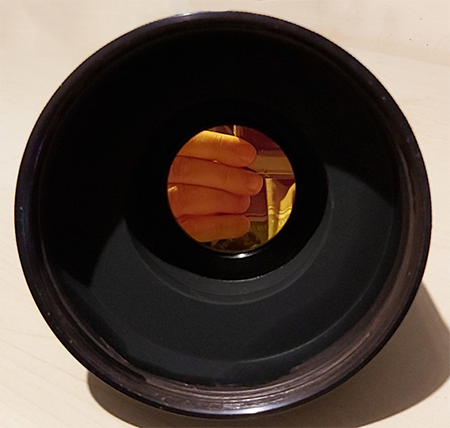 You are missing a great option, the Astronomik MaxFR. I had them in my 11" V2 RASA in 50x50mm. They are great!

I did stumble across Aluxa at one point, but didn't recall hearing about them in the forums.  They have a 5-band-pass filter that looks interesting, and they say they can do custom sizes.  I'm not sure if they'll work with an f/2 OTA, though.

Astronomik makes 50x50mm, I had them.

On the RASA, you must either keep bandpasses large or get preshifted filters with medium bandpasses. I would be worried of any of the multiband filters are they tend to be narrow.

Astronomik makes 50x50mm, I had them.

On the RASA, you must either keep bandpasses large or get preshifted filters with medium bandpasses. I would be worried of any of the multiband filters are they tend to be narrow.

The Hutech NBZ duoband is specifically designed for fast scopes, and has a decently narrow bandwidth (10nm-ish?).  Check out the bandwidth curves with various speeds.

IDAS has a dualband filter (Ha/O-III) for very fast scopes.  Check out the curves here: https://www.firstlig...-dual-band.html

I made this earlier this week for my own reference but it may have some relevance here, This is for a RASA 11 and it shows how big of a area is needed to cover the light cone at 0.7 inches above the sensor. 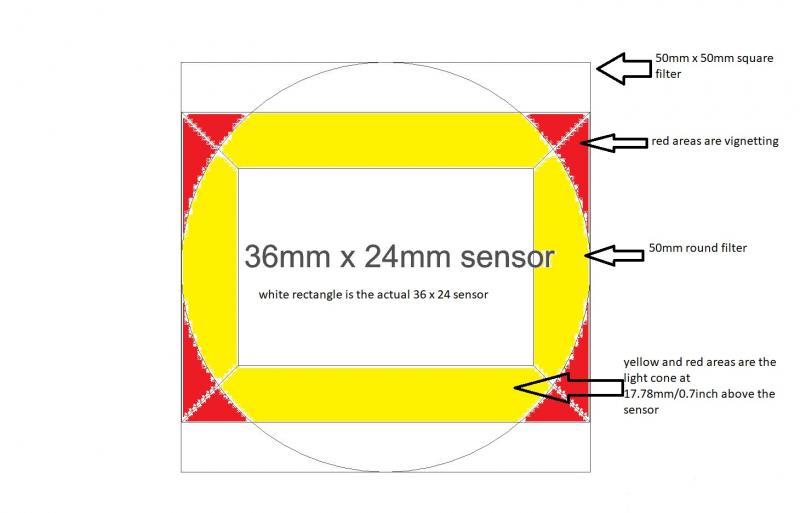 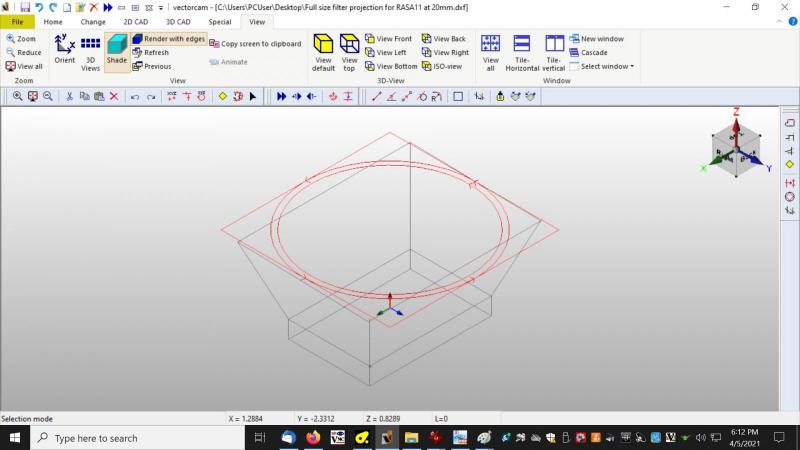 Circling back to this topic.  I ended up breaking down and just buying a PreciseParts adapter to fuse with my existing Baader UFC.  That came out beautifully, and it had the negative space to fit over the Celestron Light Pollution Imaging Filter.  Mission success!  However, now I have tilt and/or backspacing issues to contend with.

The RASA 11 requires 72.8mm of backspacing from the lens group mounting platform, including any filters or glass.  With the camera consuming 17.5mm backfocus, I set the PreciseParts/Baader stack to 55.3mm, giving me 72.8mm total.  I was able to focus near the upper range of my Celestron SCT focus motor, but the corners were badly out of focus -- and it looked like the telltale signs of backspacing issues because the stars in the corners seemed to orbit around the center of the frame.  I also had a bad tilt issue, which is strange because these same cameras on my other Baader UFC stack have so little tilt that I never even bothered to work on it.  Tilt + backspacing is a challenge, because they both can cause similar effects and it can be tough to figure out which to resolve first.

I did try adjusting the camera closer to the telescope, .5mm and then another .5mm, but this is the best I got before calling it a night: 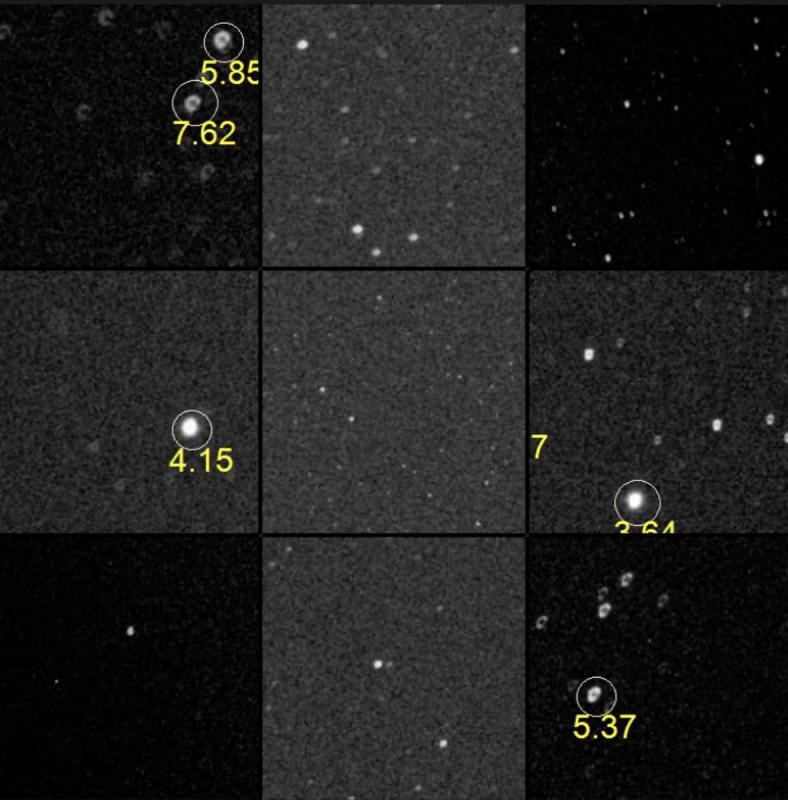 I think I'm going to tackle tilt first tonight, but I couldn't see anything wrong with the stack and can't imagine the PreciseParts adapter not being orthogonal.  In the Baader UFC all the grub screws are tight enough, and were tightened incrementally.  For now, it's a mystery.

[Edit]:  I was using CCDInspector to check for curvature and tilt.  This is always a horrible experience; I tried pointing at several dense star fields but the CCDInspector results should shift around A LOT between subs even with a well-tracking mount and fairly stable skies.  I've seen the same with other products attempting to gauge collimation, tilt, etc.  I suspect I am getting inconsistent results because the curvature/tilt was so bad.  I'll try to improve things by eyeball first, then fine-tune with CCDI.

The problem is that sometimes the sensor in the camera just isn't perfectly orthogonal, even though the image train seems tight. Bugbit (posting above) will sell you a tilt / backspace adapter that sorts this out. I've got one, and it certainly gives you the tools to sort the problem out.  This is with or without the PreciseParts adapter - I'm using the full Baader UFC connections (but obviously not the Celestron filter / window).

The problem is that sometimes the sensor in the camera just isn't perfectly orthogonal, even though the image train seems tight. Bugbit (posting above) will sell you a tilt / backspace adapter that sorts this out. I've got one, and it certainly gives you the tools to sort the problem out.  This is with or without the PreciseParts adapter - I'm using the full Baader UFC connections (but obviously not the Celestron filter / window).

I agree with this. There is no point in trying to fix this issue unless you are sure the sensor in the camera is flat.

The RASA V1 is notorious for mirror flop and I had two before Celestron finally relented and replaced with a V2 which is far more stable. I think the mirror on the V1 can rock producing tilt which is not user correctable-or that was my experience. I'm glad you have the V2 as that is one less thing to worry about.

I suggest you study this thread https://www.cloudyni...tment/?hl= tilt and build the laser collimator. Even if you can't immediately adjust for tilt (not sure if your camera has built in tilt adjustment or you need to reconfigure with a tilt correction option) the laser collimator will tell you what you are up against. You need to have the centre spot rotating in a 1 cm square on a piece on graph paper to get a good enough result when you put the camera back on the RASA.

I prefer the collimator to being under the stars. You can adjust in minutes where it can take hours under the stars and sometimes CCD inspector is of little value.

On the ASI2600 I have pretty much eliminated the tilt to only a few percent. I agree totally that CDD inspector is a bit inconsistent I've had frames that look great and CCD inspector has said they have lots of tilt- so its only a guide. The laser collimator is far better as it is seeing agnostic and you get immediate and correctable feedback.

This is an example of a full frame on the ASI2600 MC pro where the camera was corrected with the collimator: 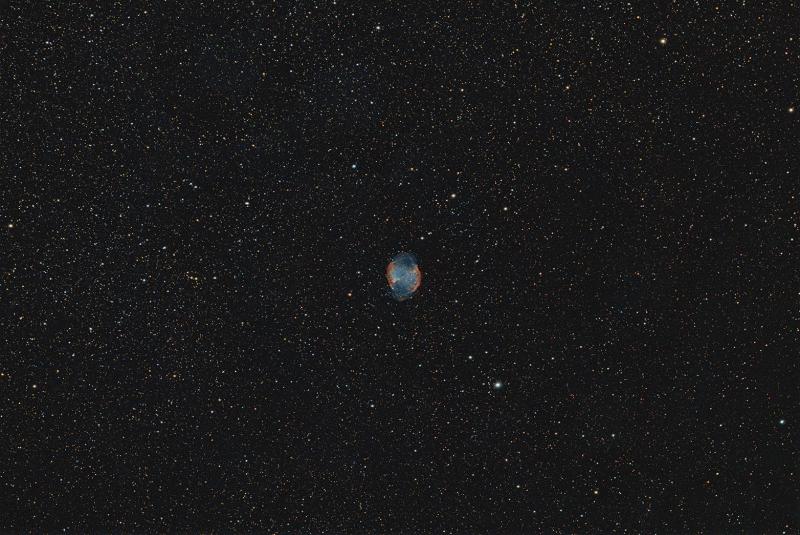