Great idea! My second Towa - 60/900 - gives perfectly sharp images but with a bit o CA. If I could get rid of it and increase slightly contrast (perhaps by painting lens sides with black paint?) this scope would be really great. I'll have to try replacing plastic ring spacer with foil spacers!

I did purchase the Carton 60mm F=910 refractor kit that jragsdale found on FB Marketplace (see:  https://www.cloudyni...2#entry12029203), but when I first used it at night for a star test I found it had rather severe astigmatism.   Looking at the objective lens under CFL illumination, its Newton's Rings were farther off-center in the lens aperture than apfever's images in green monochromatic light.  Under magnification I could see two of the three lens spacers were wrinkled / crinkled.  I disassembled the lens and replaced all three spacers with ones of uniform thickness (matched to the measured thickness of the one smooth+flat original spacer, which was 0.004-inches thick).  This nicely corrected the far-off-center Newton's Ring interference pattern: 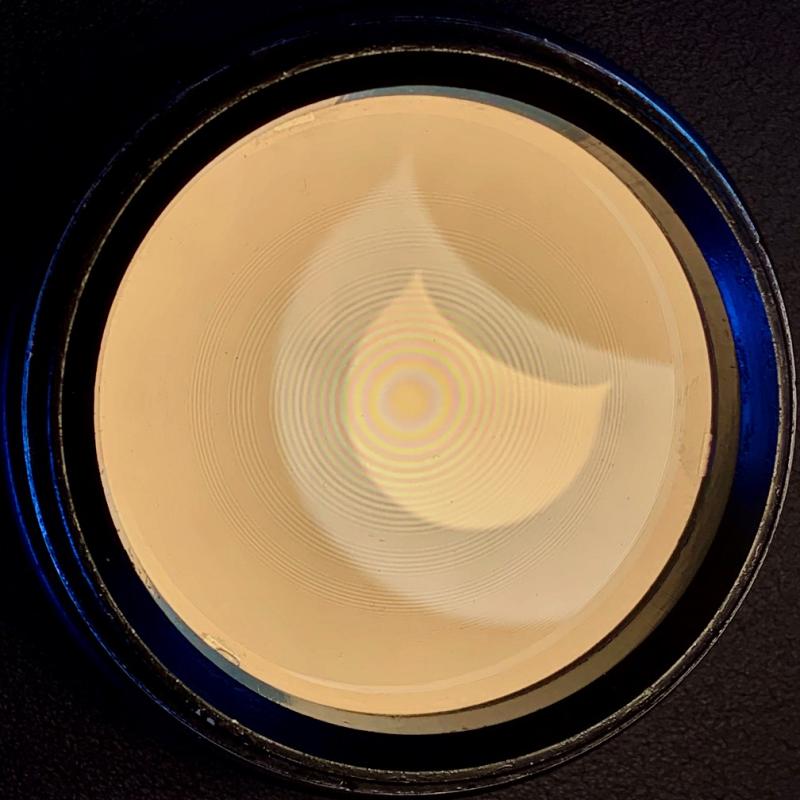 ... but although the star test then showed better images, at 180x magnification the images did still show astigmatism, looking at best focus like plus signs  +   with interference fringes in the arms, rather than round Airy disks surrounded by concentric rings, and inside/outside focus like tell-tale short orthogonal lines.  I've subsequently ruled out the possibility that the Carton lens cell might be distorting (warping) an otherwise good lens, as well as ruled out the possibility that the telescope tube might not be square between the top (where lens cell attaches) and the bottom (where focuser attaches) -- a Vixen 60/910 lens installed in the Carton cell and used with the Carton OTA performs very well, while the Carton lens installed in the Vixen 60/910 cell and OTA remains disappointingly astigmatic.  What I haven't done is experiment to see whether the Carton lens could be improved by changing the clocking between its crown and flint elements; there was no index mark on the lens edges when I disassembled it (yet there were two wrinkled/crinkled lens spacers as already noted), but I made my own index mark prior to separating the elements, and I reinstalled the elements in the same clocking orientation as found.  But its present degree of astigmatism is far from subtle, so at this point I'm not optimistic that finding the optimum clocking relationship between the elements (if other than their orientation as I found them) is gong to change this Carton lens from a dud to an excellent performer ... but I've been wrong before (like when thinking the centered Newton's Rings were a good omen after I'd replaced the lens spacers ...). 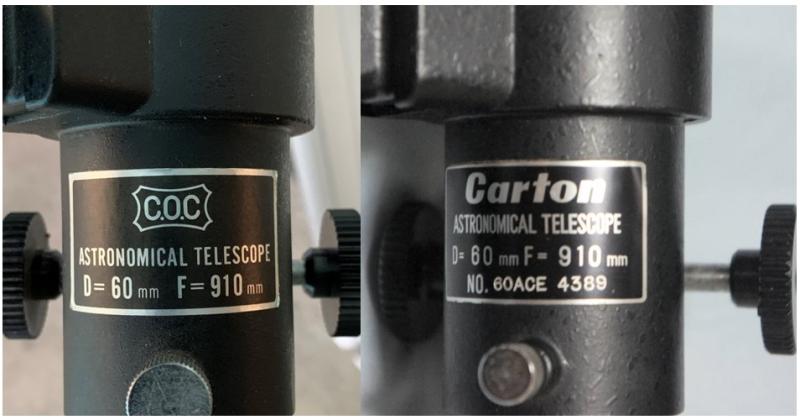 ((I'm debating whether to acquire a Carton 60/910 OTA whose label appears at right above, in order to be able to swap-in a genuine Carton objective lens into the Carton refractor kit from FB Marketplace, rather than leaving the Vixen lens installed ... but is that silly ?   I'm not eager to "throw good money after bad", certainly, but speaking for myself one of the main draws of the Carton 619-A refractor kit was to experience the views through a genuine Carton objective lens ... of course maybe a previous owner already swapped out that refractor's original [optically excellent?] lens to use it elsewhere, and swapped-in a dud --- I have no way of knowing --- but a Carton refractor kit with a Vixen lens isn't quite the same, is it ?  Agree or disagree ?))

The astigmatism is most likely not going to go away by clocking the elements.,  I would view without the diagonal just to rule that  out .If you have laser collimator that fits the focuser, I would  use that be sure the beam exiting  the front of the lens is in  the exact center, then point the scope at a wall about 6 feet away. If the lens is collimated you should see one spot on the wall. If you see more the lens is out the collimation and you need to adjust the the tip/tilt  to bring all the spots together. That usually means elongating the screw holes for mounting the lens.

If you have it aligned and you still see astigmatism then it is in one of the elements of the lens. It is not uncommon for these small lens to show problems. They are not precision optics that are  accurately tested, just mass produced one that if they pass simple tests and are sold.

Mine was bought by the first owner in 1976

Mine was bought by the first owner in 1976

Thanks ... yours appears to be of a style intermediate between the two in my post -- yours has the earlier "{ C.O.C }" logo replaced by "Carton" although not yet switching to the later label's (right side in my post #52) more narrowly-spaced fonts for "Carton" and for "ASTRONOMICAL TELESCOPE".  The later label also includes a 4th line for the model-number + serial-number.