Hi All, A friend has bought a Zeiss TM mount that he's having problems with. He doesn't "do" the internet so i've been tasked with finding information, i'll describe the issue first.

With the mount plugged in and the arched cover removed he marked the gears which he says are turning, he's locked the RA (hour) setting circle which isn't turning. He's tried locking the red RA knob that provides the slow mo lock but that also makes no difference. He's tried it with the OTA in place to provide load and he's tried it with no load but still no movement from the drive. He says the slow mo controls work fine with and without load. I've told him to undo the 4 screws on the RA cover that hold the Dec assembly but he's reluctant to do so without knowing what's inside. I'm thinking it's a clutch issue (if there is one) or a gear not engaging with it's shaft properly or maybe even a stripped gear if it's been rough handled.

So, for the last few hours i've trawled the internet, i've found pictures of the gearbox under the arched cover but little else (as shown below). There appear to be no manuals available or instructions on how to adjust anything inside the drive. Has anyone here got a schematic view or pics of the inside of the RA head? or adjustment Instructions . The pictures i do have are only of the gearbox/motor side so i haven't a clue what's inside the RA cover. Thanks in advance for any help. 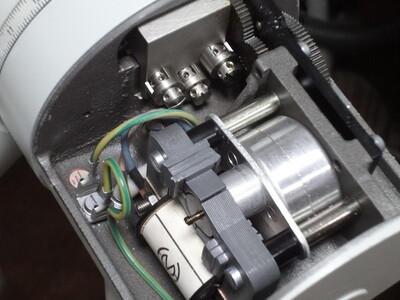 If he is just using the movement or lack of  movement of the RA circle as an indicator of movement he might be being fooled that the scope is not tracking. Many high end telescopes are design so the RA circle is  driven with the mount so once calibrated on a known object it reads the correct RA all the time. So  the circle is moving with telescope so RA reading doesn't change when the scope is tracking.

Thanks for the reply Dave, He's an old hand with astro gear, a keen astronomer since the early 60's. He's left the scope running for hours apparently set with every combination of locks on/off even with a digital level taped to the weight bar and there's no movement. I just wish he'd either sell it to me or let me at it with the screwdriver

I've offered to go round and have a socially distanced cup of tea so i can tinker with it, but like the stubborn old goat he is, he wants to be prepared with a little understanding of how it works and how to fix it.

Well if the gears are turning and the locks  are in the lock position, the only thing that I have seen in the past is set screw is loose so the main worm is not turning.  When the scope is unlocked in RA it should be free to move, when locked you shouldn't be able to move the scope. So that is one check that the locks are working.

I agree Dave, i reckon slipping clutch or stripped/loose gear somewhere. If nobody here can help i'll tell him to strip it.

He's refurbed his own zeiss T mount so i don't get his reluctance to dive in, there again he's a bit techno shy as this is the only the second driven mount i've seen him buy.