I was offered this 7x50 binoculars as a (Zeiss) WWII , but personally, I have never seen anything like it ( but I am not very experienced in binoculars) and I have doubts about the real authenticity of the binoculars.   LMG is actually one of the brands of Carl Zeiss, Jena, but looking at it this does not look much like 7x50 binoculars, it looks more like wide-field binoculars such as the Sard 6x42.  What do the experts think about these binoculars. 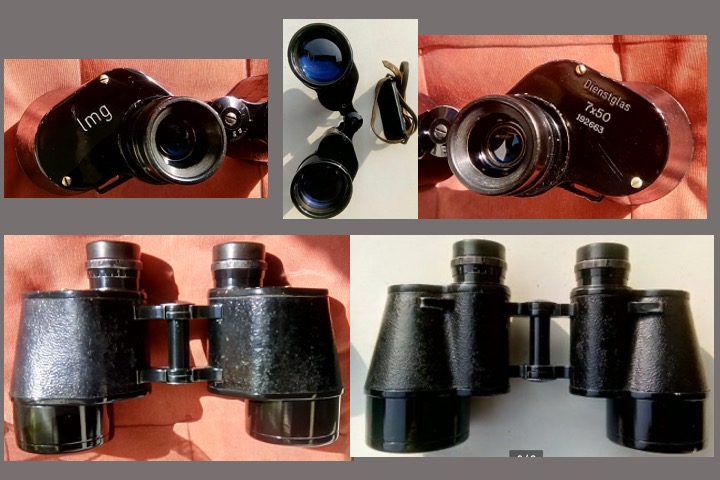 I cannot help in the authenticity of the binoculars however more important what do the views look like!?

lmq, not lmg, is a WW II German coding for Carl Zeiss, Jena “to identify completed devices manufactured by foreign manufacturers for the company in sub-delivery (partial quantity of a main contract)” - Google translation from Seeger’s grey book, page 140. blc and rln are the most commonly seen WW II codings marked on Zeiss binoculars, and if genuine this would be the first lmg marked one I’ve seen. But I have my doubts about this. It looks to me a lot like one of the 7x50’s made by Zeiss Oberkochen in the 1950’s- 1960’s but with fake markings. And if it’s a 7x50 those objectives appear air-spaced which I think was a feature of many Zeiss Oberkochen 1950’s- 60’s Porro I binoculars. In spite of the questionable markings, I’d guess this is a well-made and for its time period an optically fine binocular with a wide field of view. It will be interesting to see what you can discover about it.

It is a 1950s Zeiss Oberkochen 7x50 porro-prism with fake marking.

The serial number would indicate about 1939. But that type as mentioned came up later in the west. Here is a good article. Another interesting mismatch is 7x50 vs. 8x50.

Now the question is why would someone go for all the trouble and put wrong markings on a post WWII Oberkochen? The markings are pretty obscure, no eagle, no swastika, no submarine, no airplane. The value before/after engraving should be about the same. So why "fake" it? And the bino does look old with the worn brass and the screws.


Also tagged with one or more of these keywords: Binoculars