Cgem mount does not work

Hi friends. I have a celestron mount Cgem for 10 years. since then it never had any problem, I use it at a fixed location. days ago I went to turn on the assembly and the hand control did not work, after some attempts to turn it on and off, I realized the following: when I turn on the assembly, the hand control indicates "initializing" and quickly goes out, leaving only the bottom of the screen on, but without displaying any indication.
I searched the forum and following some tips, I did several tests:
I changed the power supply, plugged in the auxiliary parallel port and nothing solved the problem. During the tests, I realized that the data transmission function (pressing the INFO AND UNDO buttons) is operational, I updated the latest firmware on the hand control and there was no response. I tried to update the firmware of the stepper motors, but in the software it says that it is not possible to connect the assembly.
The question is to identify which components are defective: the hand control or the MC serial board of the assembly.
Importing these components is very expensive here in Brazil.
does anyone in the group have any idea how to identify the problem?

I appreciate the help.
in time, i'm looking for someone here in Brazil to test the hand controller and sorry for my english, i'm using google translator.

I had intermittent power problems about a year ago.

Inside the power jack there is a split prong. I used a tiny screwdriver to split these a little further apart.

No further problems since then. They must have been joined too close together and not giving decent contact.

You might have a totally different issue, but that's what fixed some weird issues with mine. 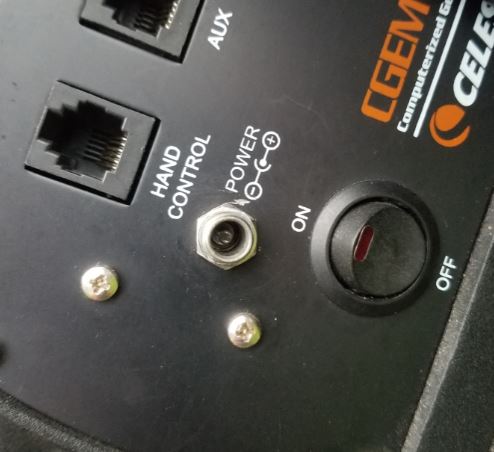 I appreciate help, I made the adjustment you indicated, but the problem still persists. due to lack of options, I am doing several tests. see that it all started with the hand controller going off after booting for a few seconds. so testing the cables of the hand controller I found that if I leave the white wire out of the connector, the hand controller stops being erased and reports faults code 17 and 16 in the same way that is reported in other forum topics. when this occurred, i went to check the firmware version of the engines and found that the version is wrong. but I can't update using the MCupdate software.

Moving this to Celestron Computerized Telescopes for a better fit.

Check the continuity of the cable on the Hand Controller. There could be a problem with the RJ connector.