My son has an ETX105. Should the batteries be removed when using a power adapter?

There doesn’t appear to be any guidelines on the subject and I would not want him to inadvertently cause damage to the electric circuit by having two power sources running concurrently.

Many thanks in advance.

I don't think the power jack on the scope has a switch to disconnect the internal batteries. It wouldn't damage the circuit by having both power sources connected at the same time but it would not be good for the batteries. The power adapter would try to charge the batteries and they don't like that. Check the warnings on batteries.

Thank you NearVision. Your advice is spot on! Inserting the jack does indeed disconnect the battery pack.

I am very grateful, your help much appreciated, thank you.

Which brings up the question of whether the scope loses power momentarily when plugging or unplugging the external power source. And is there a risk of losing the alignment info in the processing of switching.

Scenario - you set up and align the scope on internal batteries but then plug in the external power for observing.

While not for an ETX, I've attached the power board schematic for an LX90, which should be the same. Shows that the negative side of the connection controls which power is utilized. 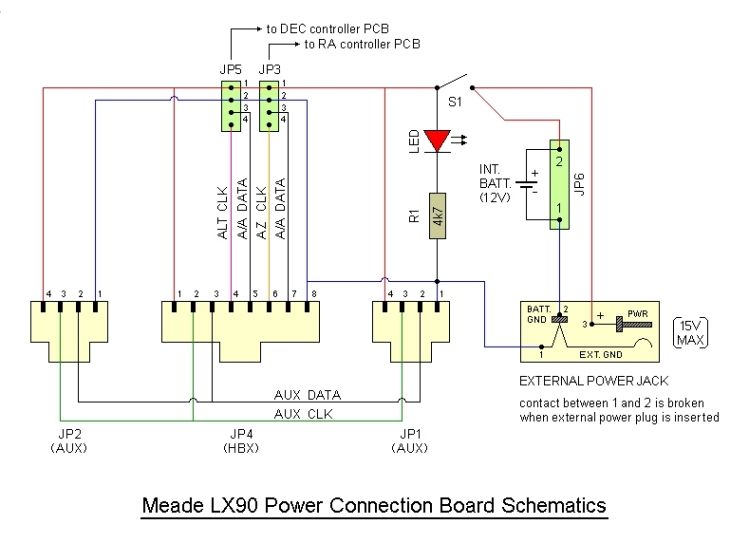 The test I had tyrosmick do was only to confirm if the power jack has a switch builtin to disconnect the battery. It's most likely very similar to the schematic for the LX90 which shows the switch on the negative leg. Meade tends to stick with similar designs throughout their lines.

As to if the scope will retain it's settings if you do a 'hot plug' for switching power... It might. ('Hot plugging' is when you have something running and quickly switch a connection to something else. If you've ever heard a loud thump when someone plugs in a microphone or something else to a speaker system, that's a good example of bad hot plugging.) It depends on how long the circuit is open when the switch changes position when you plug in the AC power adapter. This is dependent on a number of things.

The bottom line for me is to try not to do 'hot plugging' and shut down the equipment before connecting a different power source unless I know that the equipment will tolerate it well. Connecting power while it's working can also possibly create spikes or sags on the power supply which can have anywhere from no to very severe affects on the system and the power supply. This is less likely with most scopes because of the relatively simple power circuit requirements. But I like being paranoid sometimes!