When I look at Sigma Orionis, I can only see 4 of the 5 stars. And I’m not sure which ones I’m looking at. Maybe A, C, D and E? Does anyone have a diagram that labels the stars with their letters?

Is it even possible (with average amateur equipment) to see the 5th star?

Post #12 has them all marked. Pretty tricky with a camera. Not sure how it would go with an eyeball!

When I was getting back into astronomy, an acquaintance invited me to look through her TEC 140. She pointed it at the 'Trap' and there was 5 stars, one blinking in an and out, such is the atmosphere of the Sierra Nevada foothills - but there it was.

This is a very tight star system and the less bright stars are buried in the glow of a brighter partner. Look for the bumps: 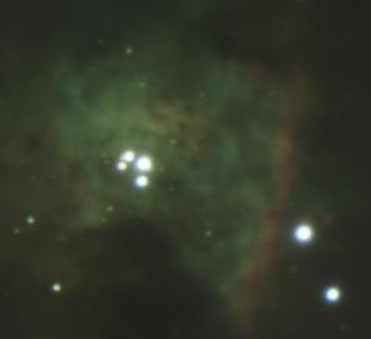 The AB pair with a 0.3” separation is a tough nut to crack with most amateur telescopes so the most you are likely to see is four stars with the AB pair being the brightest of the four.

Here is a photo: 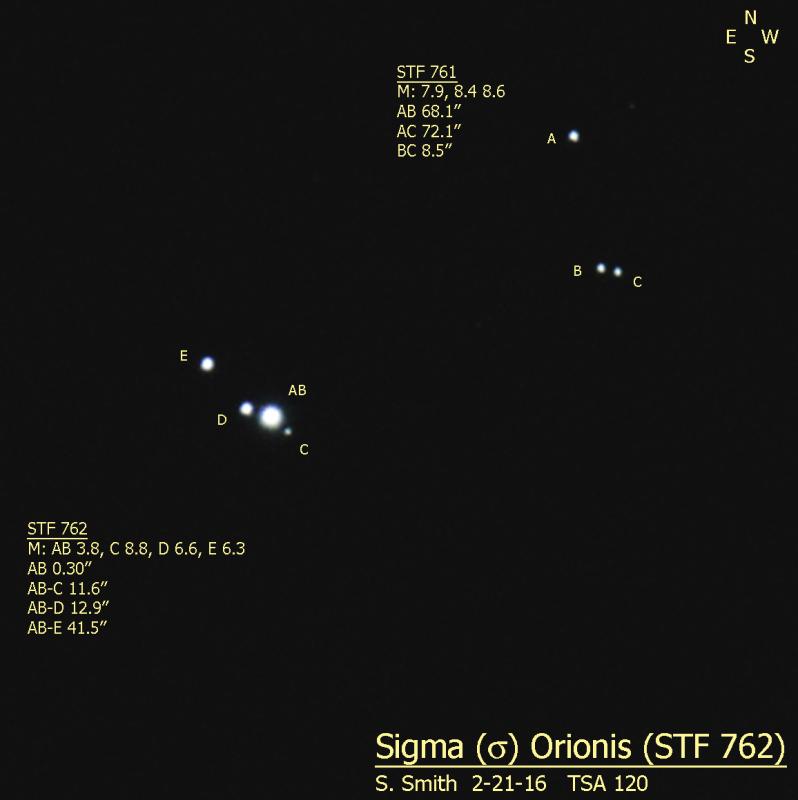 Sigma Ori is not the Trapezium...

Sigma Ori is not the Trapezium...

Oops!!! My bad. I read the OP too fast...but still a challenge to split

Thanks. I’ve been seeing AB, C, D and E in Sigma Ori. That helps! Not sure if I’ll ever be able to split AB.

Farther down in the constellation I’ve been able to see 6 stars in the Trapezium so I’m pretty happy about that. How hard is it to see 8 stars there? Is it worth attempting with my 12” dob? Would it require extra dark skies?

The AB pair of Sigma Ori was discovered by SW Burnham (BU 1032 AB). He records it as a discovery with a 12-inch refractor (among the variety of scopes he used over time).

There's a calculated orbit available in the 6th Orbit Catalogue, and the diagram shows a near-circular orbit as seen from our vantage point in space. This means that the separation doesn't change very much. Magnitudes of the stars are given as 4.07 and 5.27, so there's enough difference to make it a bit tougher than a Dawes Limit (matched) object.

The Ephemeris gives a separation of 0.257" for each year 2019 to 2023, consistent with the near-circular orbit diagram. PA changes year by year - 248 for 2019.0 to 238.7 for 2023.0. The orbit calculation is Grade 2 so it should be good on predicting positions. Speckle measures of this pair from 1975 onwards show hardly any change in separation, just the noticeable continuing swing in PA over time.

So at a separation of near-enough 0.26" much of the time, that's the Dawes Limit for a rather larger scope than Burnham used to discover it; a 17.5-inch, not the 12 he used. Detecting elongation should however be possible with lesser scopes - the limit might be closer to a 10-inch, for which 0.26" is a whisker less than 0.5-Rayleigh. I'd think it worth trying with scopes in that range. Dawes for a 20-inch is ~0.23", so that should work for a bare split or near split, depending on the degree of extra difficulty from the brightness difference, which is helpfully moderate rather than large.

Sigma is beutiful. AB,C,D and E in line are very pretty. But C is not to be taken for granted not even in my 8" scopes. Sometimes I almost must use "indirect" seeing to really notice it. But I am at 57N so this region is never high above horizion...

PS Sigma AB? Well on a night with 10P and my fantasy & imagination ability is 100%, sure

I imaged it in a 8-inch SCT - Canon 40D January this year in suburban skies.

Nice pictures and I like the wide view that shows the surrounding stars make it look like  a small version of Sagitta.

Saw it last night with my 5inch Skywatcher Heritage - I am at -27 Degrees - looked amazing!