Shot the moon tonight. Focus was a little off, so I scaled down. It wouldn't have fit full size anyway. 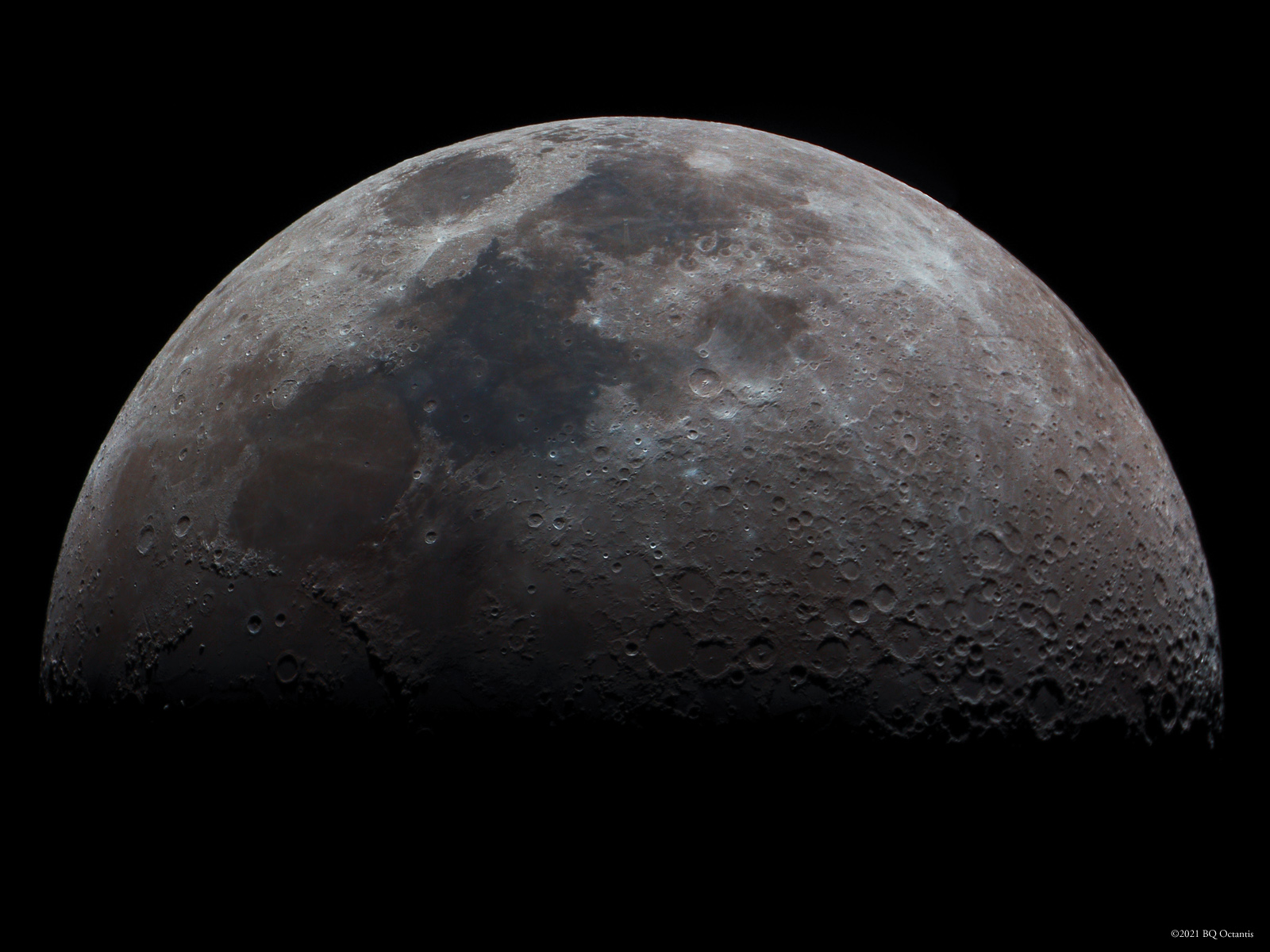 That’s lovely, BQ. Is that really 30s exposure??? That’s crazy long for the Moon, even for a Mak.

That’s lovely, BQ. Is that really 30s exposure??? That’s crazy long for the Moon, even for a Mak.

I thought I did saturate it!

Ok, you asked for it. I had to stack 4 images per panel to improve the luminosity and color for 60% sensor scale:

That’s what I’m talking about. What was your processing chain like? You have avoided the olive green I seem to get at the terminator when I push the saturation. I think it may be an order of operations problem on my part.

As an artist, I don't usually document my workflow. But I made another run through a typical processing chain for a single sub: You can see the residual color noise even with a >3:1 binning; as I stated before, a stack of 4 improves this to better than 2:1 binning.

I don't think I avoided the olive drab at the terminator at all. I just don't usually bring up the brightness high enough to notice. Here's a strong push on it to bring up the color in the early morning light: 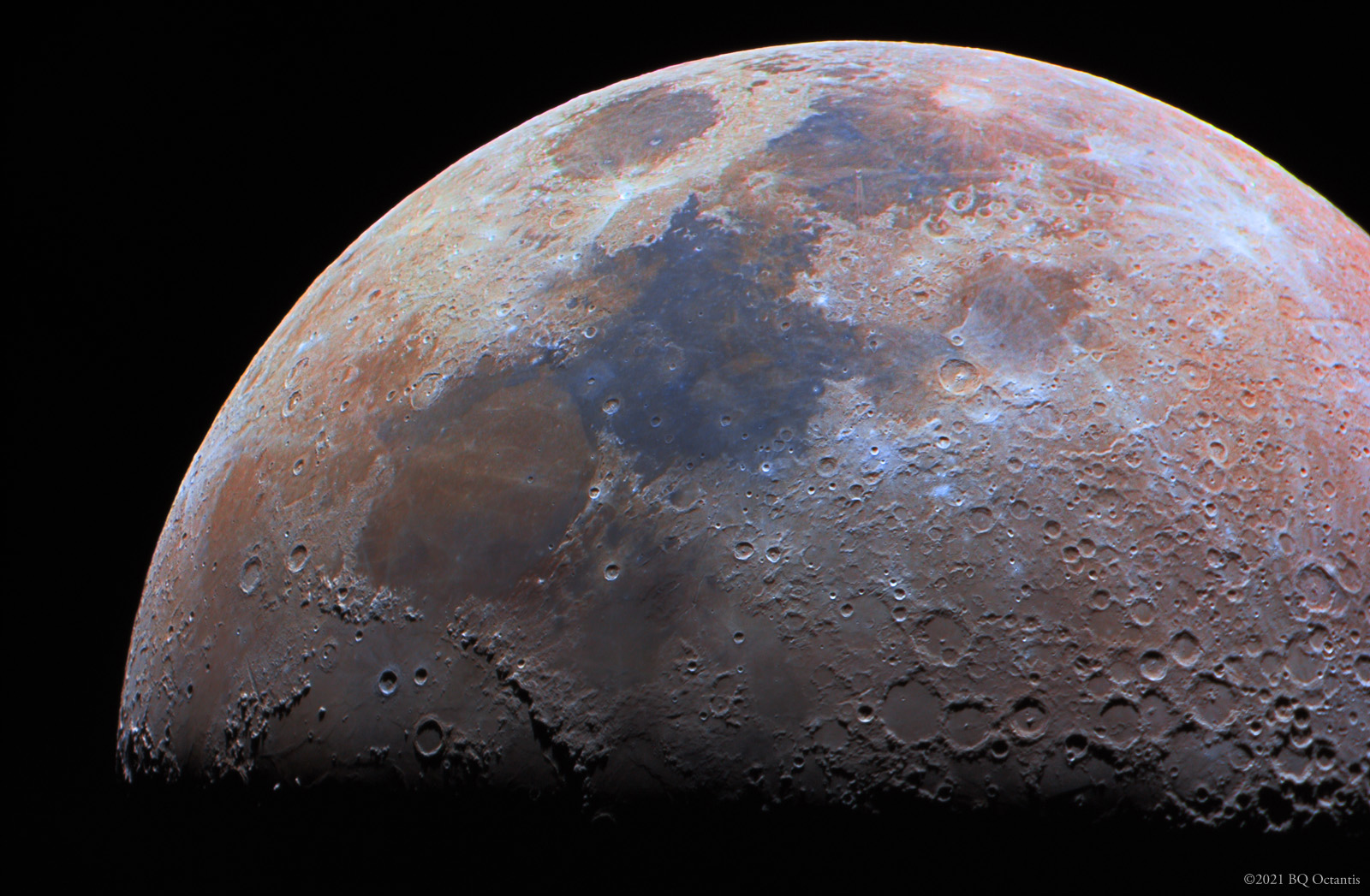 So I think there's a steep drop in color contrast as you approach a tangential sun angle. Mine is a brown drab that super-saturates to red; with a little tweak to color balance, I could easily make it olive drab…

BQ your color looks good all the way to the terminator to me.

As an artist, I don't usually document my workflow. But I made another run through a typical processing chain for a single sub:

You can see the residual color noise even with a >3:1 binning; as I stated before, a stack of 4 improves this to better than 2:1 binning.

Ok, in the light of day there is a lot to dig into here. First, your tool is fancier and more expensive than mine (photoshop) ;O). Second, your process is fancier and more expensive (in terms of time and patience) than mine will ever be, but that is probably why you get better images. However, there are definitely some nuggets of gold in there that I can learn from. First, it seems that practically the first thing you do is non-linear stretch with curves, so that can't really be the cause of the color artifacts near the terminator I tend to get. Second, the amount of processing you do on separate layers rather than the raw image. I can't do that in Astra Image, which is my main tool. I may have to bite the bullet and learn layers in GIMP. Third, you've given me the idea of processing a luminosity layer separately. I like what you did there with the weighting of the luminosity map being heavily weighted by the green channel, which will have the highest signal to noise ratio because of the 2 green subpixels. That means you can sharpen the luminosity map harder than the RGB before onset of visible noise. And of course you can separate the luma and chroma noise processing as well.

Thank you very much for the detailed commentary. It's a gold mine!

No worries at all, mate!

I use Photoshop CS5 that I got through an ancient license upgrade path that made it affordable (back when as a private user, no one wanted a piece of your salary in perpetuity). I've been using Photoshop since the mid '90's, so coming up on 30 years. So my workflows these days feel like a cross between Bob Ross (painting "happy little trees") and Andy Warhol (making art 10 different ways—"The more you look at the same exact thing, the more the meaning goes away, and the better and emptier you feel.").

I purposely didn't use any of my Photoshop plugins for the sample workflow, so it should work in Gimp (especially the layering). I've tried to use Gimp-only workflows, but Photoshop is actually a major time saver. Each of the numerical values for each step above required 4-5 assessments to converge on a decision. Photoshop is made for this—its preview update of each change is nearly instantaneous, whereas Gimp applies the new test value to the entire image (which takes several seconds to update). So while Gimp has completely equivalent in functions, Photoshop is a major time saver.

The luminosity stack trick I learned from planets and applied to DSOs. I discovered with planetary that I had to normalize the sharpness of each channel before applying deconvolution and wavelets to the collective (RGB). For planetary, this is partly because of the Bayer pattern as you describe, but it is also because the atmosphere destroys the channels differently (so a low altitude Mercury has a great red channel, whereas a high altitude Mars may or may not have an intact blue channel—and my Moon's red channel just looked the worst). But for DSOs, in the featureless deep sky background the green channel is practically the only channel that has data (and the SNR of whatever the red has makes it unusable). I experimented with B-RGB (on the LMC), R-RGB (Mars), and GR-RGB (Mars) before realizing I could just create a Lighten-only luminosity average (M42). This was my first application of it to the moon.

Lastly, thanks for getting me to push the saturation to its limit. I really enjoyed the color contrast of this last post—it's a feast to the senses! So I'm working on yet another workflow to create a mosaic of it to post to the 'Bin…


Also tagged with one or more of these keywords: DSLR, Moon, Astrophotography