Very busy here domestically (DIY) recently, even so have made time for some fine views on offer.....Here a compilation of some of that.

Also took time to see what I could get from that 120mm f/5 Achro on Mars. Earlier attempts had me stacking Barlows with mixed results – but too many overhanging/unbalancing extension tubes.  As I had other considerations (the 3”) with such; I decided to get a Bresser 5x Barlow.  This turned out to be very good optically – even powers on the (415mm f/16-f/18 D-K) of 1430x & 1765x (coupled with a 260x 26mm TV Plossl!) – testing on the Moon and some doubles – the maths don’t seem to square but those, subject to further refinement, are what I measured.

Anyway with the 120mm Mars readily revealed recognizable detail.....albeit the need for more steadiness in the mount/tripod.  As earlier I said with regard to that scope: recognizable features certainly, but it becomes more of a stunt than a study other than say the planet looks relatively normal.

Further to that, due to feature-familiarity, objectivity risks compromising or at least open to such accusation by the skeptical......still t’was a fun project: *Operation Pig’s Ear to Silk Purse*..

..; and my Mars quests this apparition are likely at an end.

During those small-scope struggles I had, on a few nights, spotted Mars close-passing OC M35 in its (homebuilt) 8x50 finder.  On Apr 29 I took a look with the 12x65s and hence the presented sketch.

Those doubles’ renderings are from fine views in January with the D-K – having accrued a fair few of various doubles that were incidentally recorded in company/inclusion with my Mars better-seeing sessions back before opposition.  Also more recently alongside Vesta investigations. 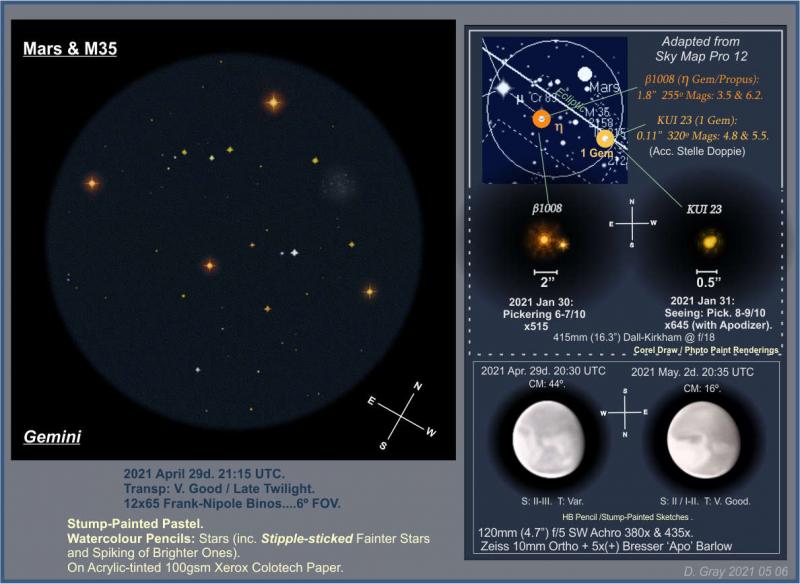 Nice sketch of Mars/M35 and This ‘n That

Mars was superb this go around, your sketches are a testiment to that.

Beautiful work and versatility in optics - the mark of a true observer. Thank you for sharing these David....

Sorry for the slow response........on Friday morning after a good session with Jupiter & Saturn a cat leaping off the observatory/garden shed north roof caused a major cave in.  Showing how rotted/weakened the structure was (and likely surprised/shocked the cat). That  fixed/non-opening roof already earmarked for a major renewal by end summer.  The (temporary) repair has taken some time and effort and that was constantly stalled with the showery weather.

A good chance to catch J&S again the morrow so hopefully will post both dates in due course.

I was very keen to observe the Mars / M 35 conjunction.

But sadly, Dave, Dublin skies had clouded over.

A great guy in Limerick imaged it before his skies became overcast.

Both your sketch, Dave, and his image are extremely good.

Propus is one of my favourite binaries.

I have managed to separate it at 167X with my William Optics 158 mm triple apo.

The primary has a delightful colour.

By the way, I'm checking out excellent organ compositions by Marcel Dupre these days.

And I hope you take things nice and handy with your DIY project and that all will be good in the end.

... will give a fuller listen on my next relax-evening – hopefully not too far away in this busy time........

Yes I only just caught the Mars/M35 not so near miss.  Posted below is Mars’ bullseye with the Beehive.  Awkwardly it occurs during midsummer nights and I’m thinking those a deal more south than us will have the best chance.

Maybe I’ll get it from our bedroom window with the 20x100s; tho’ it’s where our western horizon starts to gradually rise northward.  Better methinks the north-side of the village church wall, offering a vantage point for its fine view westward with its higher elevation than here.

The terrain that direction rises markedly n’west toward the Durham moorland.  In fact also in that direction, about a dozen miles, is the village of Tow Law (Tow rhymes with cow) once the Parish of the Rev T.H.E.C. Espin (double stars etc.).  The region has a reputation for particularly bleak winter weather, noted for being the first place in Durham County to get isolated when it snows!.......Cheers, Dave.

Edit: Checking the western sky this evening, some 30-min after sunset, as I anticipated; way too bright even to catch Mars let alone M44; and brighter still by June 23.....!

Seems those south of 40ºN to 30ºN especially, might catch the event.  My disappointment might lead me to render a simulation; if I can get an actual sketch of the cluster coming evenings....... 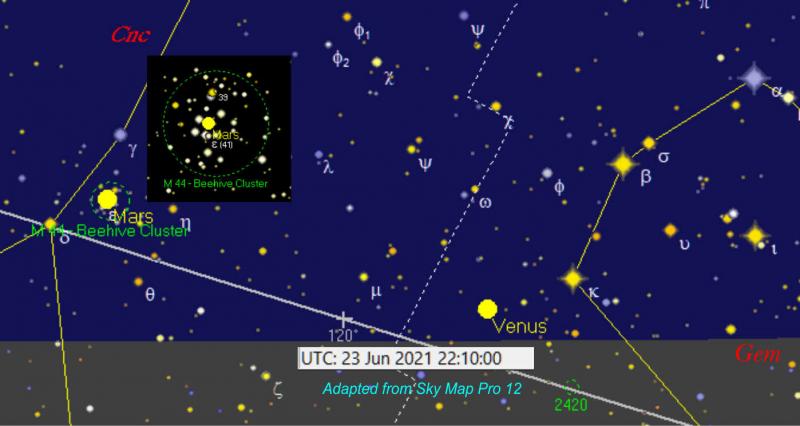