Can you see detail on Jupiters Moons?

Absolutely. The Jovian moons are not just tiny discs anymore.

A few years ago my observing buddy and I ran some NASA images of Ganymede through Aberrator. We scaled the images then processed them using information about the scopes we were using. We just wanted to see what Aberrator might say about the visibility of features on very small discs. This is not conclusive proof of anything, but it is amazing how Aberrator output some images that were fairly realistic through 6" MCT, an 8" Dob, and a C14. I apologize for the small size of the images. It was a result of scaling them to Aberrator's resolution. Just to show how difficult the observation can be and what one might expect.

The real image we used:

Below is a blow up of one of the images, I believe the 8" Dob: 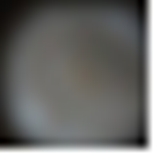 A couple of others we played with: 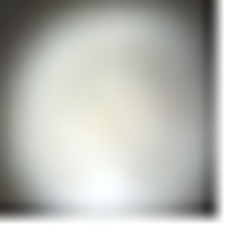 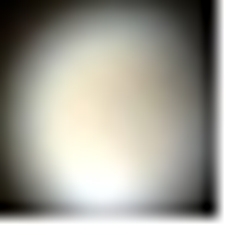 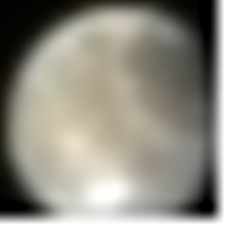 Forecast is for above average seeing in a couple of days! I have a new challenge! What can be detected in a 10"Meade SCT, 6"Mak, and a Vixen 4"Achro. And the GRS is going to be face on towards midnight!

I hope Ganymede presents itself well for you. IIRC, Ganymede has a one to one rotation in its orbit around Jupiter. So, albedo should be visible at certain times during its orbit. Crater Osiris and at least one other can be seen. The darker shades are a little more elusive than the brighter "specks".

Personally I have never seen anything on Ganymede but I have heard of reports of markings using 8 inch SCT's and high power.

I wonder what the minimum aperture to observe markings on Ganymede is??

I wonder what the minimum aperture to observe markings on Ganymede is??

I the 2004 S&T article, "The Story of Jupiter's Egg Moons," Pickering urged armatures to attempt his observations of Ganymede and Io in a 4" to 5" aperture, and under very good conditions some detail is, "readily visible". Indeed a 6" can show both surface albedo on Ganymede and Io's very slightly elongated "appearance". Higher magnification helps. Not that the scope magically resolves more, the image is what is is. Higher magnification of such tiny "resolved" detail is easier on the eye.

One really needs a good night, use some high magnification, and catch Ganymede when some bright speck-like craters are facing the Earth. For Io elongation, it really helps when Io is seen against the clouds or against the dark of space with Europa very nearby for reference. Like S.W. Burnham, one has to be able to discern very small elliptical discs from round ones. He was able to discern 0.2" double as elliptical. Both he and EE Barnard confirmed Io's elongated appearance against the clouds using a 36" refractor. But, no need to go that big. It is within reach of modest amateur instruments and a keen eye.

So far albedo with a 6”. Weather has conspired against further testing. Also, this was only at 34* high. Very good seeing at the time!