It's been a long long long long time since I have last observed the Corona. Work commitments, weather, and, ironically enough, Corona (restrictions) have prevented me from going out to mount Mitchell since last November. (https://www.cloudyni...rona-yesterday/)

However, yesterday was the day, finally!

Now since then, I have made some equipment improvements:

I have now made a full set of cones for the 2" instrument (before I only had one cone, the “Corona cone” which is the second one from the left in the picture). 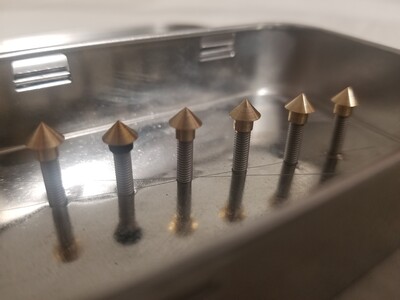 The instrument is now riding on a dual motorized advanced Polaris mount. This is much more convenient than the single axis drive of the new Polaris, and the bubble level/compass you can add to align the mount is really helpful during daytime observations. 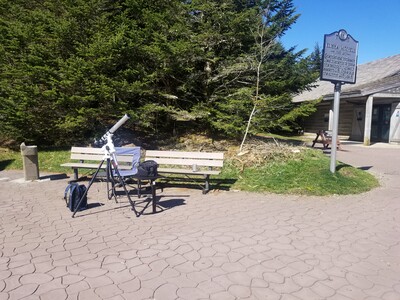 So anyway, I set out early in the morning since the weather forecast was okay enough and there was an active region starting to rotate onto the disk.

I arrived at 8:20 AM and set up my equipment. The sky was only so-so and I was doubting whether I would be able to see anything. I scanned the limp with the filter, first using the achromatic objective which had still left in from the setup trial the day before. However I really couldn't see anything.

Then, I switched to the singlet repeated the procedure. Initially I did not see anything, but then I checked the orientation and where I would expect the region to show, and after two minutes of fiddling I was actually able to see a brightening at the expected spot. I just focus, and good moments I could see a few faint rays coming from the limp. These structures were really weak though, and the observation, while certain, was pretty marginal. This maybe the weakest I had seen the Corona, except maybe for second time in November.

However, just to try, I switch back to the achromat and I was actually able to still see the region, somewhat to my surprise. It wasn't quite as clear as with the singlet, but it was there and still readily apparent. I guess if the sky is not that great, that levels the playing field between the single lens in the achromat against.

I switched back to the singlet and then I took out the cameras in order to produce some pictures as a record. I started with my trusty old IMX249. This is the original camera, but the chip is not large enough to produce a one-shot image. 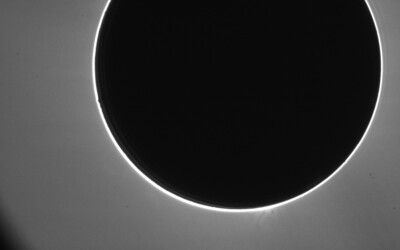 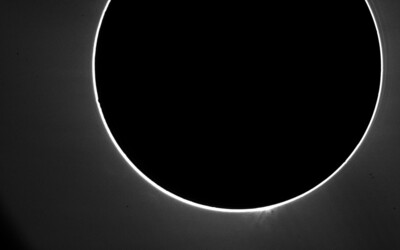 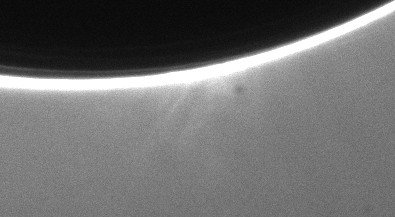 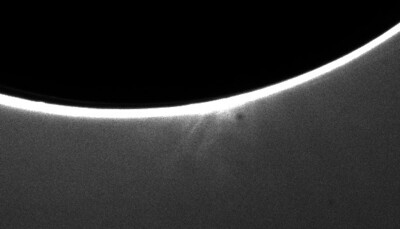 The region is clearly visible, but really weak. However, as you can see, right in that region there is a speck of dust on the camera which I did not realize while taking the images. Oh well.

Then I switched over to my newly acquired IMX253 which has a chip size of 1.1 inch and therefore can fit the whole field of view into one-shot. 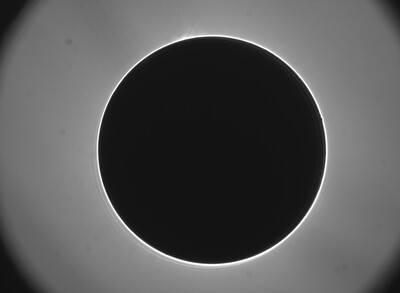 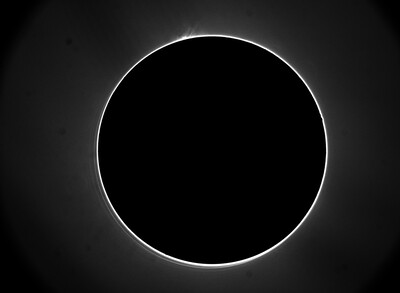 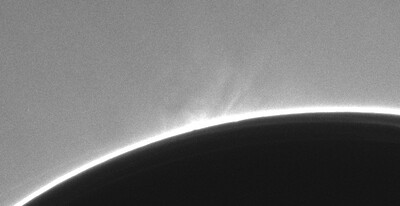 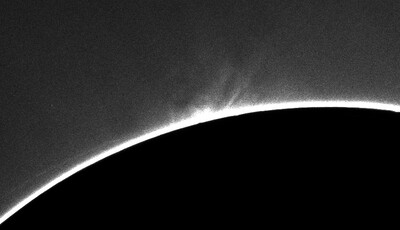 The region cropped and level adjusted

Please note that the orientation is different between the cameras because I just put the camera into the focus of the random orientation. I didn't pay attention at the time.

Also, you will note the graininess of the image which is the result of the high gain that I had to use. Smaller pixels because less like a pixel equals higher exposure time at the same f-number.

Now for comparison, here is the SDO 171A image from the date and time of my observation 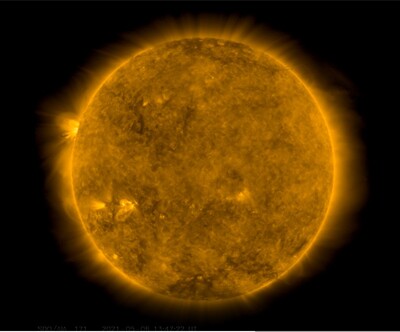 Flipped (because I used a diagonal) and rotated 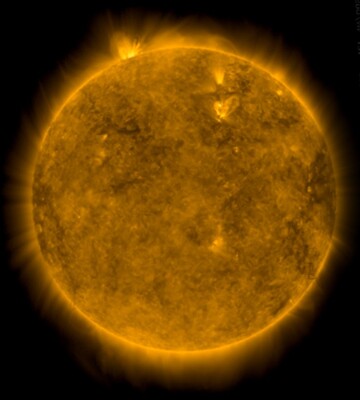 And cropped to the region 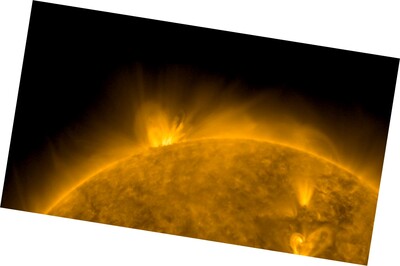 Now I have discovered a new feature in PowerPoint: making images transparent! So here is a series of overlays of the imx253 and the SDO with changing transparency. I think this is pretty neat! 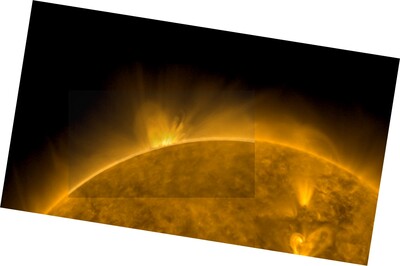 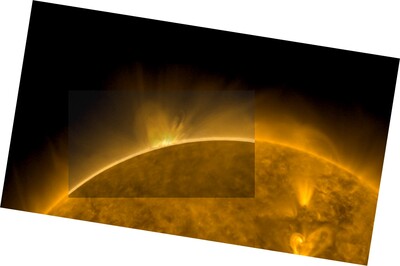 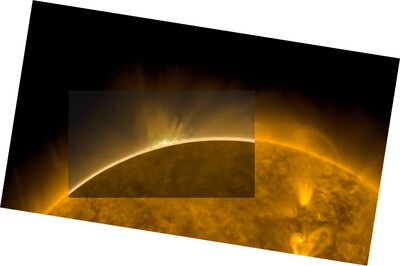 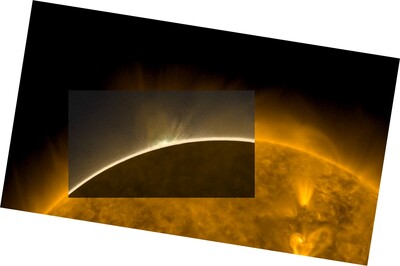 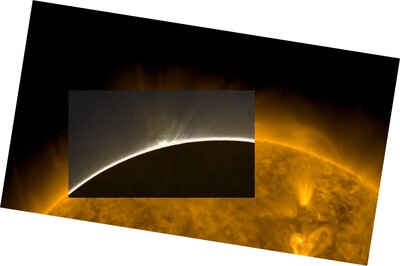 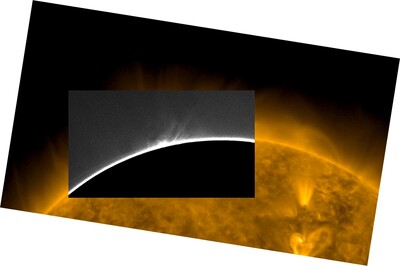 Overall, I was pretty pleased with my outing. For one, it has been a really long time since I have seen the Corona was good to be able to repeat it in any case. Secondly, I determined that an achromat can also work which I find quite interesting and did not expect. And then a confirmed that my new setup works well, which includes the mount, the cones and the camera.

The next big step would be to finally get the correct filter for 5303 Å instead of the tilted 5320 Å filter combination I have to use. What I have now is too wide and scanning the limb gets old - and it also ruins the appearance especially if you have ARs on the opposite sides. I am trying to acquire one through solar spectrum, but that process has been slow.

(I continue to work on mine, but without a 530.3nm filter, I can just watch the dim proms in H-alpha.)

I hope you can get hold of a nice green line filter pretty soon.