It's the month of May, and the flowers are popping out here in the Arizona desert.  Seems appropriate to put the Mayflowers with the May Flowers: 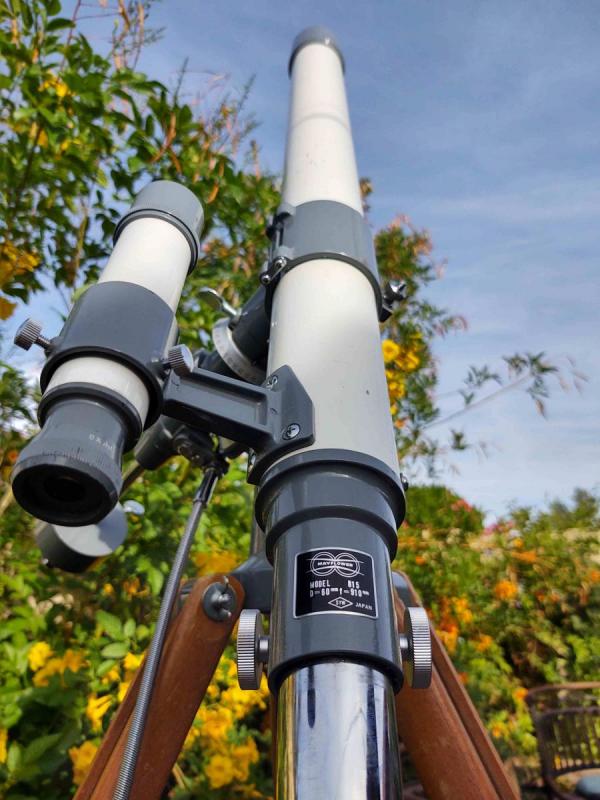 Just getting this one back on its feet after I "rescued" it off of an OfferUp post.  It had been sitting unclaimed for over a month, the pictures showing parts all jumbled in its box, maybe a bent focuser pinion shaft, no pictures of optics, etc.  The first picture on the post wasn't even of an 815, but of some other unidentifiable scope on an alt-az mount.   But I was drawn to its gray and white colors, and had never owned a classic refractor.  I was eventually in the seller's neighborhood, and arranged a meeting, thinking that if the objective wasn't in too bad a shape that I'd maybe take on a new restoration project.

Appropriately for a Mayflower, we met at a plant nursery.  The seller said she got it as a cast-off from an Uncle, and had no idea what to do with it, thinking maybe she'd put it on display, but didn't even know how to assemble it.

Opening the box, it was apparent that the scope had taken a pretty bad fall.  The focuser shaft was indeed bent, badly enough that it wouldn't turn.  Focuser assembly was knocked off true.  Dew shield was dented and scuffed up, badly enough that it was now cross-threaded on the lens cell.  Porro prism was broken, with the front end of it still sitting in the draw tube.  Yikes.  Did this thing fall out of a moving pickup?  But the tube wasn't dented, just a few paint chips.  And none of the major parts appeared to be missing.  So holding my breath, I looked down the tube...

The objective was pristine -- clean, clear, no chips.  Hardly even any dust!  Three foil spacers sitting exactly where they should be.  Worried that the banged up dew shield had also distorted the lens cell and pinched the optics, I shook it a bit, and heard a welcome clunking sound -- still some play!  Looking further, all the mount and tripod parts were indeed there, and all appeared to be in good usable condition.  Just some elbow grease and it ought to be back up and running.  So the seller got $40 from me (score!), and seemed happy it was going to someone who knew what to do with it.

So, I got it home, ordered a Parks hybrid diagonal, and started to sort out the details.  Focuser shaft came back with clamps, wood blocks and brute force (and nervous sweat...).  Focuser assembly trued up fairly easily.  Had to add washers under the screws to keep it true -- you can see that in the image.  The mount's gears got a cleaning and a single drop of machine oil.  Both axes move very smoothly.  Dew shield is still waiting -- it's cross-threaded and I don't want to wreck the aluminum lens cell by forcing it off.  Quick trip to Ace Hardware for a few bits and bobs, and it's up and running.

First light was an informal session one early dusk with the first quarter moon hanging up around zenith.  The new Parks diagonal and my trusty old 26mm Meade Super Plossl (Japan) went in the focuser.  Immediately I set a personal record -- earliest observation of a satellite.  One went right across my field of view against the Moon.  I'd never seen one in as bright a sky before.  Tracked it for a few moments, then back to the Moon.  Eventually, in went the 10mm Orion Ultrascopic, with views just as pleasant.  No reason to push it too much.  Poor transparency.  Competing with high thin clouds.  Seeing is nothing to write home about.  But on subsequent outings with calmer skies, I've seen a nice symmetric Airy disk at high power.

And maybe someday I'll see a similarly forgotten 816 for sale...

A Mayflower 816 blooming in the living room. 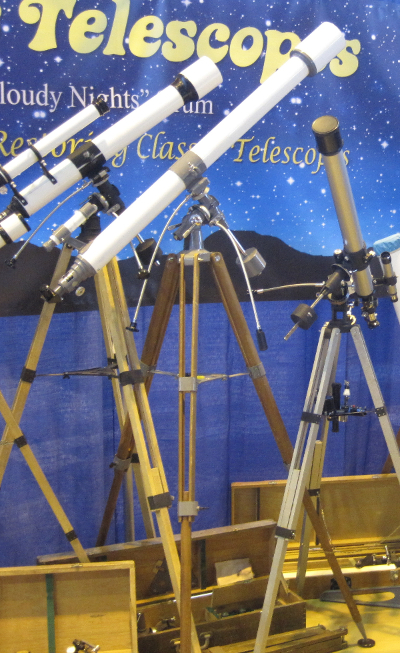 My first telescope is the 814 in the forground. The second one I found at a swap meet about 18 years ago.

It was incomplete but only $15 so I couldn't pass it up, plus you never know when you'll need a spare. 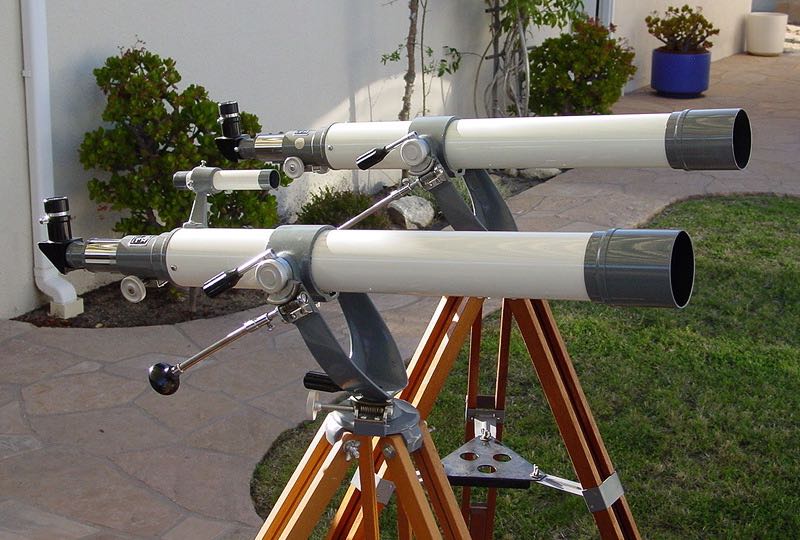 My first telescope is the 814 in the forground. The second one I found at a swap meet about 18 years ago.

It was incomplete but only $15 so I couldn't pass it up, plus you never know when you'll need a spare.

These twins look really nice. Everything is so well coordinated, color, mechanics and I am sure that the optics are excellent. The altazimuth mount looks very stable. It must be a pleasure to use.

These twins look really nice. Everything is so well coordinated, color, mechanics and I am sure that the optics are excellent. The altazimuth mount looks very stable. It must be a pleasure to use.

They are very lightweight (carry in one hand), and the mounts are a big step above the typical 60/700mmm alt -az. That, and I've never heard of anybody having one that didn't have a great objective. In a side by side test the original barely edged out the swapmeet find, but then I noticed it's objective was very dirty. Now that I've cleaned it, I need to clean the other and see if I can tell any difference between them. 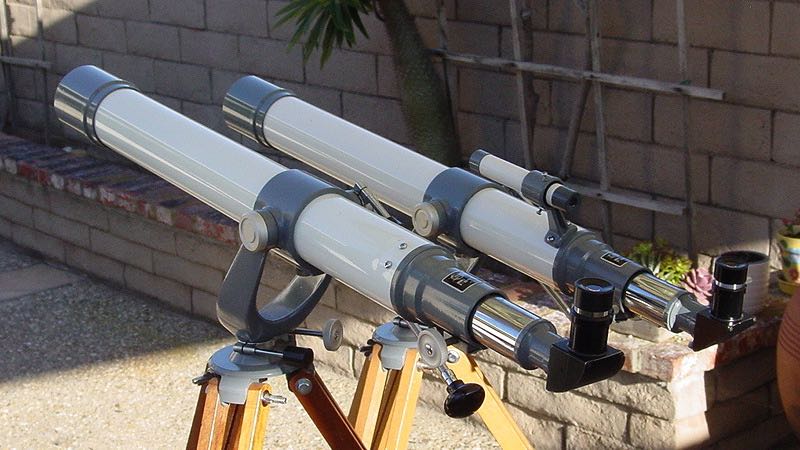 I have a finder for the missing one but it's mount is for a Manon that rides on the focuser. It will work but I'd kind of like to find an original for a Mayflower.

I almost forgot to mention that they also have a very solid and smooth focuser and will take a Vixen visual back.

What are the largest refractors that Mayflower built? Also, I have never had the opportunity to see one in person or look thru one, what are the optics like?

What are the largest refractors that Mayflower built? Also, I have never had the opportunity to see one in person or look thru one, what are the optics like?

It's kind of strange but they offered both a 76/1200mm and a 80/1200 mm refractor. Though early on they were supplied by other makers many of us relate Mayflower with SYW and SYW made a 101mm and at one time a 108mm.

I personally have no experience with any of the larger ones, but they are generally thought of as a good telescope maker.

The 80x1200 Mayflowers are the rarer models; and, usually made by APL or Hiyoshi, until the very last Towa versions...  IIRC, in sheer numbers, there are more SYW 76x1200s wearing the Mayflower brand than the Sears, as AO had more models for a longer period of time from that importer.

I have the 80x1200 APL and it is really unsurpassed optically over any telescope I’ve looked through. This is the one I’ve held onto while selling Swifts, Royal Astros, and Unitrons.

My 816 is a Yamamoto (SYW).  Excellent optics.  The single draw tube is very nice and easily accommodates 1.25" eyepieces with plenty of focuser travel. 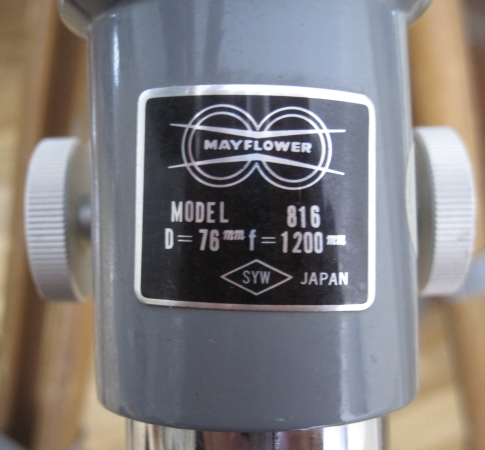 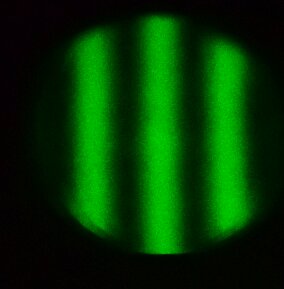 I found my 815 at a swap meet, filthy, rusty, dried out grease etc. but undamaged, missing only the wood box and most of the eyepieces. In the process of restoring it, I saw the precision and attention to detail in the construction. In addition to the aforementioned Vixen 1-1/4” usual back, I added an Orion quartz clock drive, and swapped out the original finder with an Orion 6 x 30 RACI.

Both of mine are out on loan, and I don't seem to have any pictures of them. The 814 is HOC, and the 816 is a 76mm AOC. Its OTA is nearly identical to a Tasco 10TE. Although the mounts are different, the box is the same as the 10TE.

This thread...  makes me miss this very Pretty Pair: 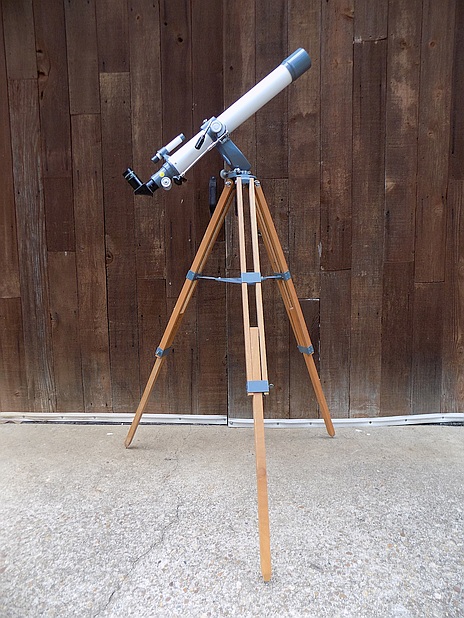 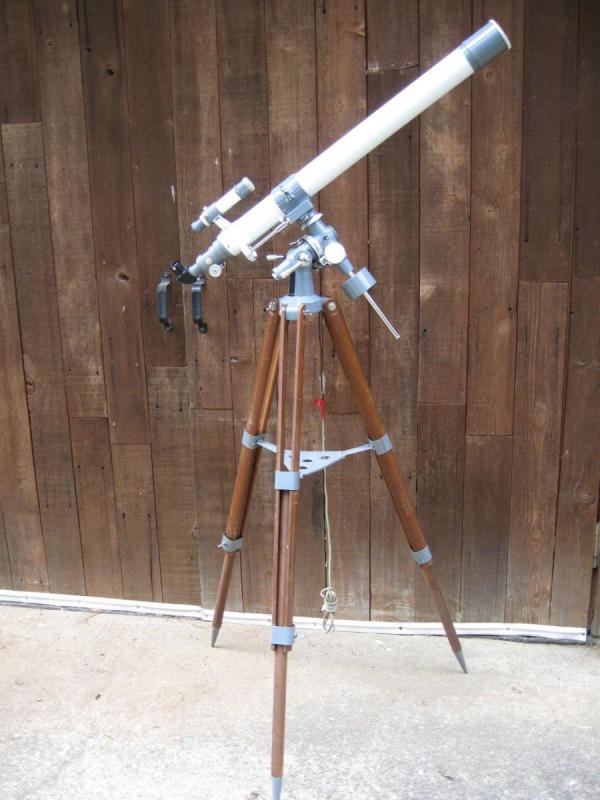 
Also tagged with one or more of these keywords: Refractor, Classic