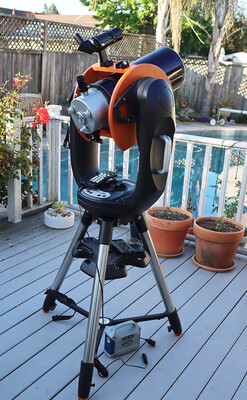 So, after all these years in the hobby, I finally bought a second hand 3.5 Questar, and was inordinately surprised by how much I liked it. Truly a jeweled masterpiece of design and function!

Not long after this, I picked up a Questar Seven Classic, pushing the envelope of my bank account in hopes of satiating my curiosity and filling out my already obsessive collection of telescopes “that I've always wanted.” Sigh.

The Seven was just an OTA. Thank gawd I could not afford an astronomically priced fork mount for it! I had plenty of mounts that would work, I thought. . .

So, I piggybacked the Q7 on my TEC 140, all sitting on my Celestron CGE-Pro. Yeah, it worked. Fun to compare views through two quality scopes of different designs. Yes, the fixed eyepiece did get in awkward positions sometimes—but not too much. 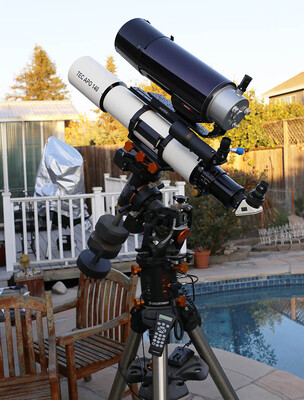 I also mounted it to a DM-6 alt-az mount that was wired for DSC's. This worked well, too, but felt the need—as you can imagine--at this focal ratio/magnification for tracking. Should I put the whole enchilada on one of my tracking platforms? Hmmm, maybe. 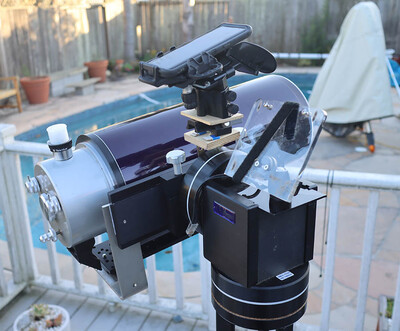 Then I spied—and bought--a used Celestron 11 CPC mount (less tripod) here on CN for a decent price. A GOTO Questar Seven? That would be fun, I thought. I'll have to cobble something together; that'll be fun, too!

So I did (cobble something together, that is). “Better not spend too much time on this,” I thought: I did not even know if this Celestron CPC mount had “issues,” or not. . .

What you see here is a simple box made out of 3/4” MDF painted “Celestron Orange.” I felt the mounting screws (seen here in the front) would not be enough to hold the OTA securely without incessant jiggling at the eyepiece (at best). However: I noticed the recessed screws in the same line as the pivot point of the altitude bearings. These recesses were 3/8” in diameter. I initially just drilled 3/8” holes in the proper places of the box and simply used friction-fitted wood dowels to catch these recesses. This worked well, but I eventually replaced the dowels with 3/8” T-nuts and flat-headed 1-1/2” machine screws. The Seven was mounted (taking care to balance the OTA w/dew shield) with two thumbscrews going through the base to the bottom of the Q.  The blocks you see in the pix are simply locating blocks to ease in assembly. Note: the CPC mount was not 'violated' in any way, nor was the Seven's OTA, for that matter: No extraneous holes were drilled, for example, in either the mount or the OTA. 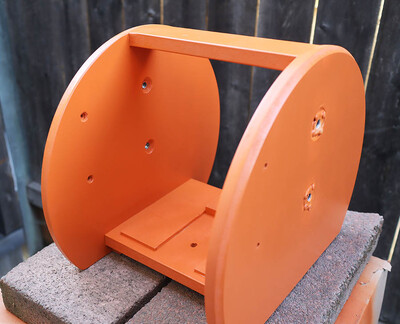 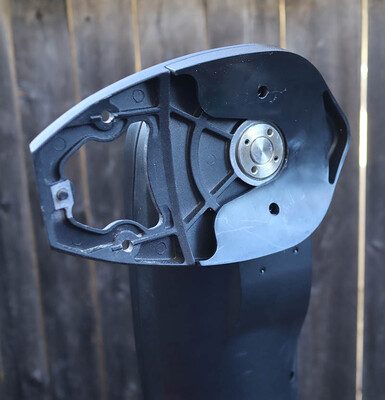 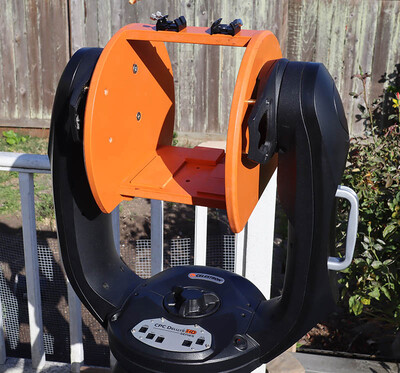 This is a GOTO alt-az mount. And it does work extremely well after just a two-star alignment, even if it is a lot noisier than I would like. Note the Synta/Orion mount on the right of the ubiquitous 7x50 Orion finder: This was for a Celestron StarSense AutoAlign camera which I could not get to work! It seems to be having some kind of Y2K problem, believe it or not! No wonder you see these on CN Classifieds so often! In the same vein, this extra mount could be used with a de-tubed Celestron StarSense Explorer which I have also, and had high hopes for. Unfortunately, this piece of hardware/software/using plate-solving tech in conjunction with your smartphone is brilliant in concept, but spotty/buggy in use: That's been my experience, at least. 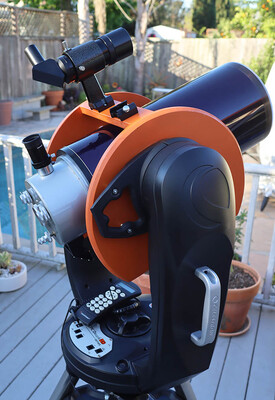 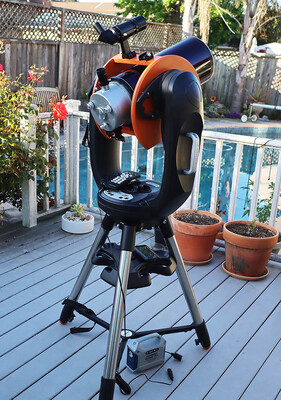 I might add that I did something similar maybe twenty years ago: I mounted an Astro-Physics Traveler on an underpowered Celestron GOTO. I quickly burned out the motors! Hopefully this mount made for a C11 will hold up better.

A terrific showcase of different mounts for the Seven, including the quite ingenious design and execution of your go-to mount. Very nicely done, and thanks so much for sharing.

If you can't go to the mountain, have it come to you.

That's a wonderful, well-written post, Ray -- thanks for sharing! I was actually thinking back to this post you wrote last November about that Q7 you had bought, and I was wondering how you were doing with it.

Wow!  What amazing creativity there!

Thanks very much for sharing!

That's a wonderful, well-written post, Ray -- thanks for sharing! I was actually thinking back to this post you wrote last November about that Q7 you had bought, and I was wondering how you were doing with it.

That's high praise from someone that writes as well as you do! (I've read--and love--most of what I've read on your web page.)

I have not used the Seven too much yet, as I was pre-occupied with mounting solutions for it. But whenever I did use it in my backyard (most recently at 3AM a few nights ago), seeing was less than optimal and--the other night, anyways--Jupiter and Saturn were low in the muck.. I do have high hopes for its performance though, as the in-and-out star images show promise; everything is perfectly collimated; and the much ballyhooed cool down factor does not seem to be a problem in this temperate zone.

I love the creative approach! The color is (ahem) a personal choice but I confess that if I had a Q12 I’d want it in yellow.

The most important point is that a Q7 without a mounting solution will not get much use.

I think the best option is to mount the Q7 on a GEM. Much better than using the Questar fork mount (priced correctly for the art, but outdated for goto).

More mods to the Celestron CPC 11 Mount. Now I can mount the Q7 and the 3.5. Or, instead: any number of refractors on the drive arm. It was easy to do! 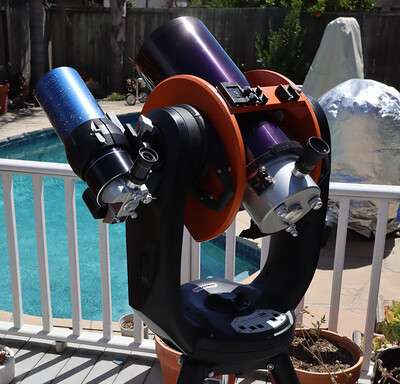 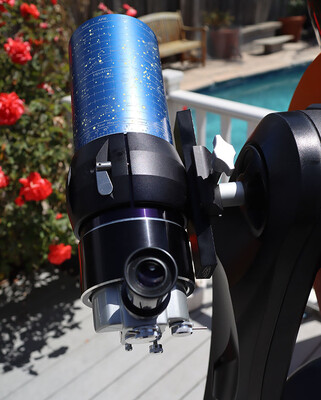 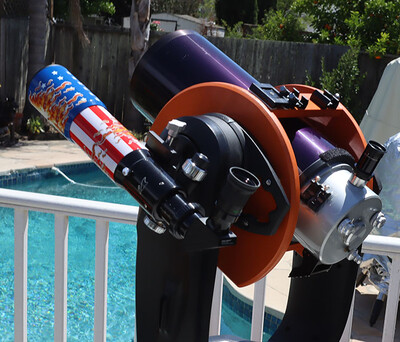 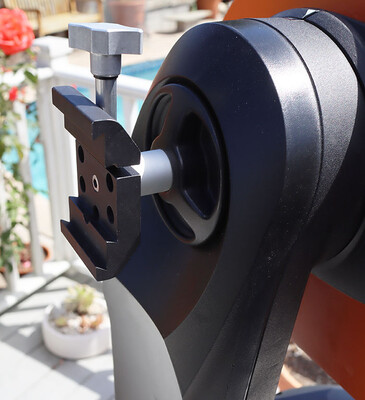 This ingenious mod came from this thread:

I like your imagination for thinking this up and your engineering skills to get it done.    I like the Q7 on top of the TEC.   I may borrow that one.    Joe

Ray that's awesome! Also thanks to you I'm doing something similar with my spare dual fork cpc. Once this prototype is done and painted, it will be home to the scope that Currently is sitting atop a deforked (only to be put on one again) lx200 8 or my SW 80ed pro.

Once again thank to you and your words of encouragement in our chats.