Naked eye map of the moon

For more than 10 years I have been looking at the moon with all kinds of binoculars and telescopes, in many cases with a sketch as a result. But I never looked closely with the naked eye… until mid-April. The weather reports looked good for a long time and at the start of Ramadan (April 13) I started my project. I managed to observe our satellite for 15 days without any optical aids (my glasses aside). Not always at the perfect time (which I think is slightly before sunset) due to clouds or other commitments, but that couldn't spoil the fun.

I used my solar observation paper to indicate the details seen (sketching is actually too big a word). Fortunately, this turned out to be fine in terms of size. I scanned everything and pasted a simulation from Virtual Moon Atlas next to it for analysis. If necessary, I turned my moon in the correct orientation. Based on all observations, I drew the lunar map below: 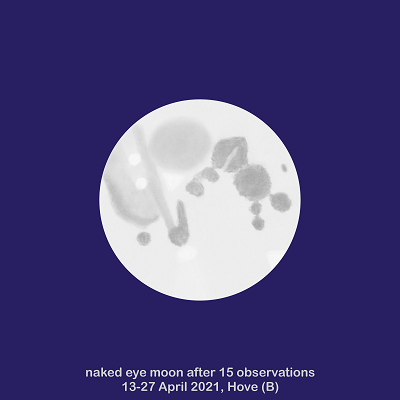 For the first three days I could not see any detail on the moon, although according to the simulation, Mare Crisium should have been visible on the 3rd moonday. No problem, the narrow crescent moon was also a feast for the (naked) eye. On the 4th moonday I was finally able to get a glimpse of Mare Crisium. It is striking that in most sketches this sea is much smaller than its actual size. The next days also Mare Fecunditatis, Nectaris, Tranquillitatis, Serenitatis and Vaporum came into view. Even the southern appendix of Mare Tranquillitatis - Sinus Asperitatis - was visible. It is striking that the seas in the eastern hemisphere are much more contrasting than their counterparts on the other side of the moon. 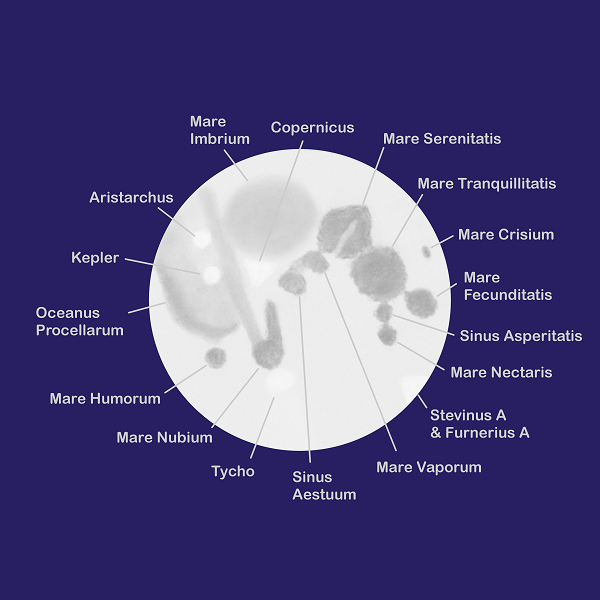 On the 8th moonday I saw something other than a sea for the first time: a lighter stripe through Mare Serenitatis. This "stripe" is on 4 other sketches and I think it could be the Bessel ray. From the 11th moonday, I noticed some lighter areas that are clearly related to large craters: Copernicus, Tycho, Kepler and Aristarchus. Of course you don't see the crater itself (they are too small to detect), but the ejected material has a lighter color than the rest of the moon. The Kepler and Aristarchus ejecta usually fused into one elongated lighter zone. The bright area of ​​Tycho appears to be north of the crater itself. However, I could not identify one lighter area on the southeastern edge. A search on the internet reveals that it is the combined ejecta of two young but small craters south of the much more famous crater Petavius: Stevinus A (8 km) and Furnerius A (12 km). I had never heard of this duo ... they are on my observation list now.

As the terminator moved toward the western lunar rim, visibility of the western seas grew better. Mare Nubium and Humorum are more striking and better defined than Mare Imbrium and Oceanus Porcellarum. I was unable to detect Mare Frigoris. The closer to the full moon, the lower the moon was in the sky when the sun disappeared behind the horizon (as mentioned earlier, I think the best time to study the moon with the naked eye). I was able to make one more observation after the full moon, but the following days the moon rose too late. Since there is most detail to be gathered around the full moon, a similar observing project in winter would probably have been more beneficial (with full moon higher in the sky). This would likely benefit the western lunar rim. 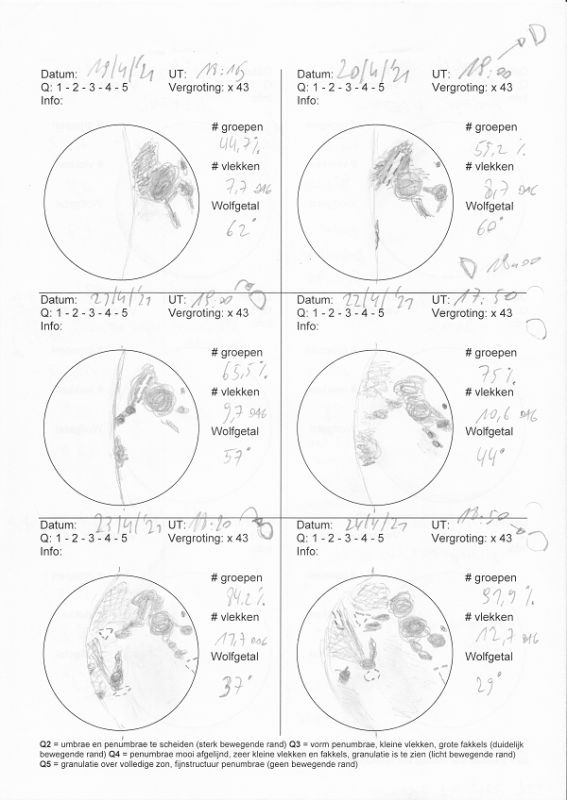 These are good. The more you look at the Moon without a telescope, the more you will see. I have a 3" circular pieces of polarizing filter material that I have attached to an internal black cardboard cylinder just for looking at the moon naked eyed; mounted on a equatorial tripod it is hands free. Works nice for daytime or nighttime viewing.

I did this mostly when I was younger and had excellent vision.

I have a 3" circular pieces of polarizing filter material that I have attached to an internal black cardboard cylinder just for looking at the moon naked eyed; mounted on a equatorial tripod it is hands free. Works nice for daytime or nighttime viewing.

Good idea! Is it bino or just for one eye?

Very good sketch of Naked eye map of the moon

it is very interesting.

"Good idea! Is it bino or just for one eye?"

Just one, even when I use binoculars I only take the lens caps off of one side. Legally blind in one eye.