May 8 dawned bright and sunny with AR2822 coming around the bend. I took full advantage of this opportunity and tried out my H-alpha arsenal. Seeing was challenging to say the least, but I perservered.

I first broke out our LS60THA/50mm DS. I wasn't planning for a full disk capture, so I used an ASI290MM and employed a Barlow for some close-ups. I did not rotate these views to depict the proper orientation; I like them oriented as shown (though mirror flipped to compensate for the diagonal). I noted a small filaprom (my current "windmill", so to speak) and ventured to capture it. Alas, no luck capturing this elusive feature with this configuration despite my seeing it visually. Still, I find this result of my processing kinda cool: 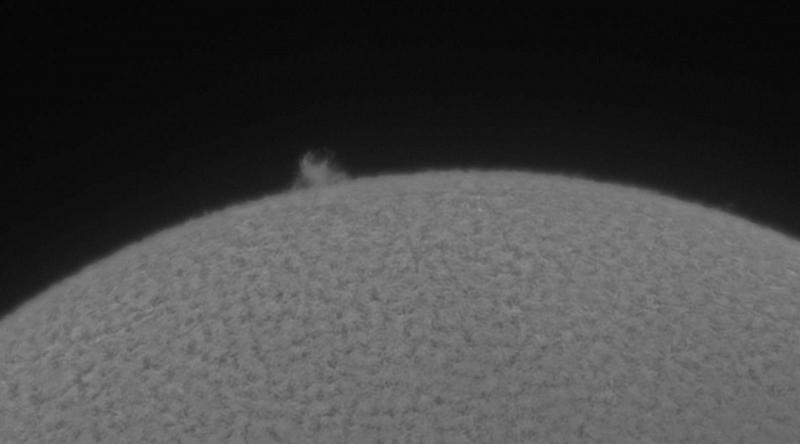 AR2822 was the star of the show, of course, so I had to shoot it with this combination. The tall prominence only helped give drama to this view: 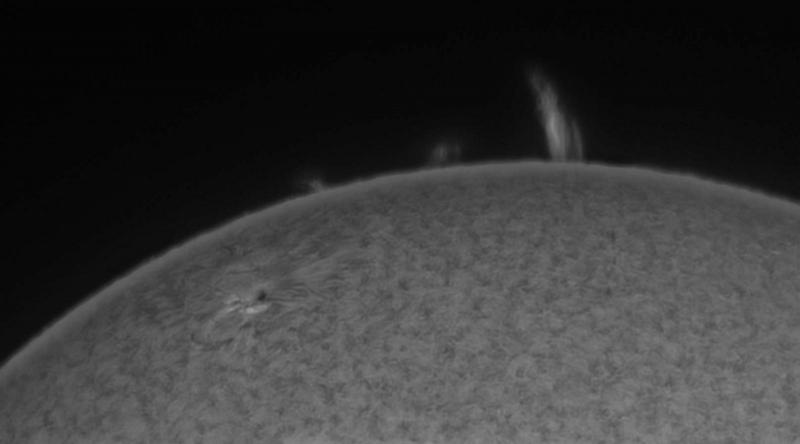 I also intended to use our Quark and plugged it in while shooting with the Lunt. This was not planned, but it dawned on me that I should really try using the Quark to triple-stack the Lunt setup. Off came the Lunt blocking filter, and on came the Quark. Hmmm.... view was dirty and I couldn't seem to find focus. Plus the dirty and *dim* views were a bit challenging. Maybe the front DS made everything too dim? Off it came. I still couldn't find focus. Hmmmm...

Not wanting to give up, and with a properly tuned Quark ready, I swapped out the Lunt setup with my Borg 90. I forgot to install its 1.4x teleconverter, but the views with the Quark even missing the teleconverter were satisfying. I managed to snag this shot of AR2822, swapping out the ASI290 with an ASI174MM: 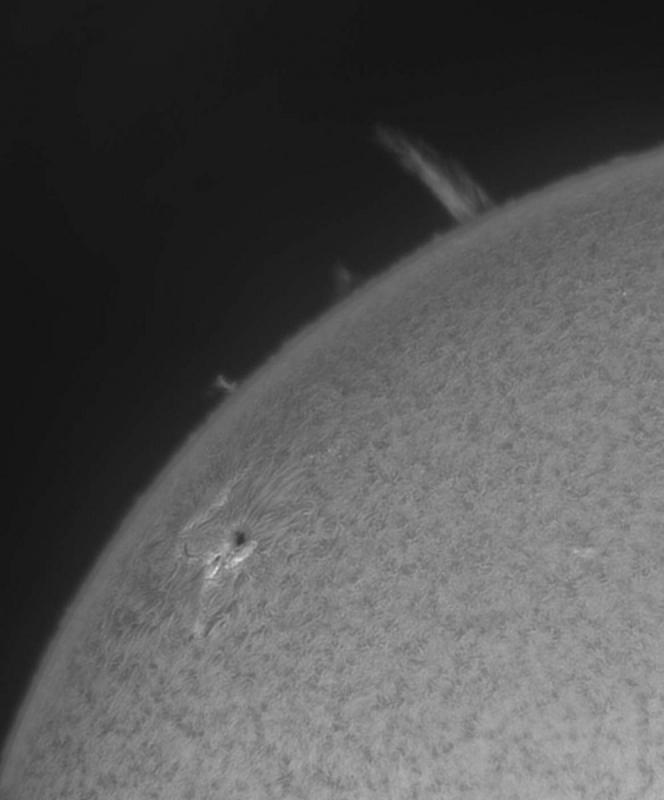 I was still fretting over the failed experiment with the Quark/Lunt combo. Then I realized.... what if I used the Lunt 50 unit on the Borg? I just so happen to have the correct adapters, so on came the Lunt 50. Hmmm.... focus issues again. Wait, how can that be, since the only change to the imaging train was adding a filter to the front? As it turns out, it was a couple of items: the dimmed view plus all the dirt in the optical path magnified by the Quark's optics made it tough to tell when I was actually in focus! That and the fickle seeing. I also decided to try adding a 2" extension tube. So I carefully racked the focuser in and out, reminding myself to ignore all the dirt I could see, and.... filaments POPPED into view.

Can you say contrast? Yes, the views were really dim, but they were GLORIOUS. Again, can you say CONTRAST? The two filaments visible at the time were practically black curves on a deep red background. I was mesmerized.

I finally tore myself away from the eyepiece and plugged the ASI174MM back in. I made a go for the filaprom once more. Hmmm, there's the prominence, but where's the filament portion? I slewed around a bit, and then I hit the sweet spot! 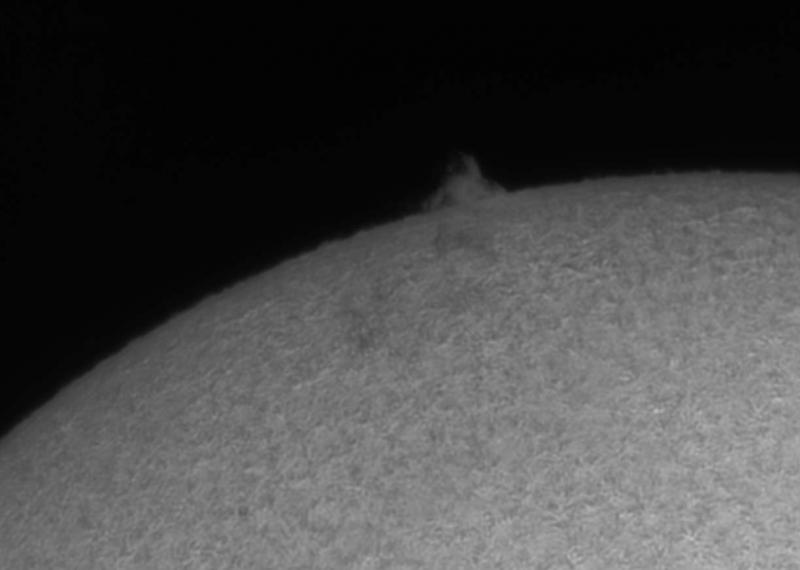 And what a narrow sweet spot it was! Slewing just a bit "left" or "right" of the view and the filament portion disappeared. Set it just right, and both parts came into view.

Oh, and did I say filaments? 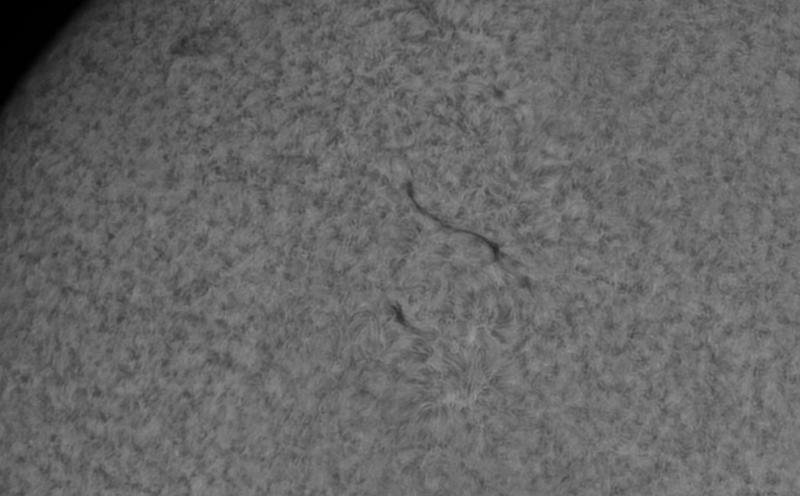 And don't forget AR2822 with this combo! 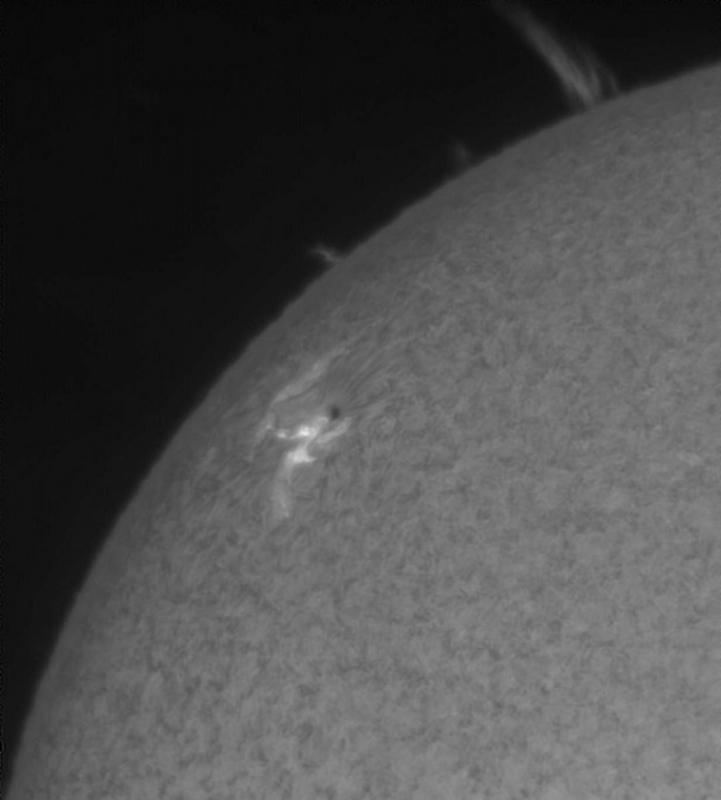 The Lunt 50 on the Borg90 made me somewhat nostalgic: this same front filter/blocking filter combo had been my sole H-alpha setup since around 2008, mounted on a Borg 76ED. For old times' sake I shot a full disk with the Lunt50/Borg90/BF1200. I guess I could have gone all "old times" and used my DMK41 (long sidelined with the arrival of the ASI174), but this was taken with the ASI174MM. It could probably have been tuned a bit more carefully, but this was for all intents a bonus shot: 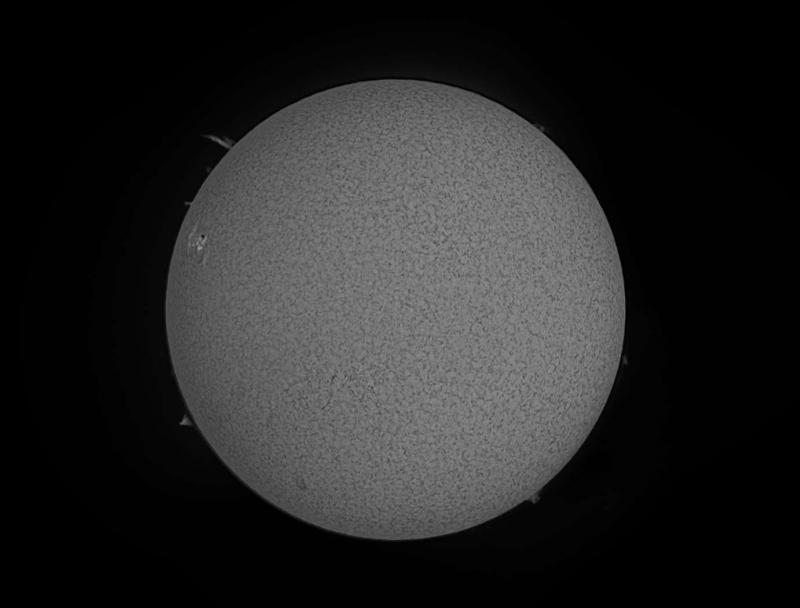 Very nice, Eric, and such an array of different setups to capture images!

Very nice, well done.  I like all of the close up shots, but the full disk is simply outstanding!  Nice and crisp and sharp, awesome image!