I am about to assemble my power centre and controller for my gear which consists of an EQ6-R PRO, QHY5L-II, DSLR, laptop, and two or three dew heaters, with extra capacity should I add a cooled camera, filter wheel, and focuser. The setup will use either mains or battery (65Ah AGM) power housed in a plastic camping cooler stood on end with a beer access door on the lid to view the laptop screen which will sit on a shelf.

When 120V is available, I'll plug in the laptop, my Pyramid PS14KX and if needed, a 70W Schumacher PC-6 regulated power supplies in the bottom section, or when in the field, I'll swap out the power supply for the battery.

With little distribution blocks I'll combine the 12V outputs, followed by a pilot light switch, ammeter/voltmeter, then wired to an Anderson powerpole socket. I'll also have a 12V to 19V boost converter to power the laptop when in the field. Of course I'll have an opening for the incoming USB cable.

The 12V output will feed a DIY imaging train mounted power distribution and dew heater controller. In it will be a fused and switched input, four 12V outputs, three fused PWM dew controllers, and two buck converters for a 5V USB and 9V camera output.

Again, I'd appreciate any input as to changes to the design that may be necessary.

By the way, I live in northern Canada where imaging in temps approaching -10 deg F will be commonplace. I doubt I'll venture out when it gets much colder.

Seems fine to me.  Look up a Powerwerx box... They have everything but the 19V stuff already wired in and they're reasonable.

Not sure what you meant.

I’ll be using little 30A distribution blocks, two inputs for the power supply and battery, one output. I can then follow with a SPST on/off switch to the A/V, then out to my scope mounted controller. I am also installing a 12V fan to ventilate the cooler.

Thanks for your comments

You'll have to make sure these two power sources do not back-feed from one to the other,

in addition to continue flowing downstream to the LOAD side.

Common method is to have one Schottkey diode on each rail, so no backfeed.

A "perfect diode" (for each rail) is even better, but costs more.

I don’t think that will be necessary since I will be swapping out the power supply for the battery when at my dark site.

If you're planning on using the battery in -10F temperatures, I doubt that it'll last very long for an imaging session. Lead acid batteries capacity is measured at 72F and cold temperatures can easily eliminate 40% or more of it depending on the discharge rate which is a function of the capacity of the battery. Factor in the rule of using only 50% of available capacity and you'll have a relatively short session. While a LiFePO4 battery can't be charged at low temperatures, it does have much better discharge characteristics than a lead acid one at the temperatures you image at. These batteries are lighter in weight, allow discharge to 90% or a bit more of capacity, have a much higher cycle life, and cost a lot more than a lead acid battery. When the cycle life is factored in, the cost per cycle becomes much less than the lead acid batteries.

I wouldn't bother fusing the PWM outputs.  One fuse on the input to your imaging train power distribution setup should be fine.

Your AGM battery will lose capacity when it gets cold.  I would keep my battery warm in my house, and warm in my car with a heater blowing on it. Then I put it in a small stryofoam cooler and it stayed warm for much of the night.

If you add a filter wheel and focuser they draw negligible power. A cooled camera is a fantastic upgrade.  Bonus is it will draw very little power when the temperature is -10°C.

What are you going to power with the 5V USB you are generating in the imaging train power distribution setup?  You will have USB from the laptop and maybe a USB hub.

I like the idea of a cooler within a cooler

Somehow I doubt I'll be making a lot of one hour trips to my dark site and staying out all night when it gets so cold, but the battery will always be on the smart charger in the house until I need it, so I'm hoping it would take awhile for it to cool down drastically. More than likely I'd be imaging from home using mains power since our Bortle 4-5 location is not too shabby.

As far as the USB is concerned, I thought it could power the hub (necessary?), a little 10W heating pad under the laptop in the winter, a LED tracing tablet for flats, Mini computer?

You would have fewer parts if you get a 12V USB hub.  Connect it to the DSLR and guide camera, and maybe the mount.   One port  on the hub could power your flat panel.

When I have AC power, I put my laptop in a box with a 10W heating pad and piece of foam under it.  The foam prevents half the heat from going out the bottom of the box.  The box and heater keep the laptop fairly warm, and the flip-down front on the box keeps in the heat and stray light. 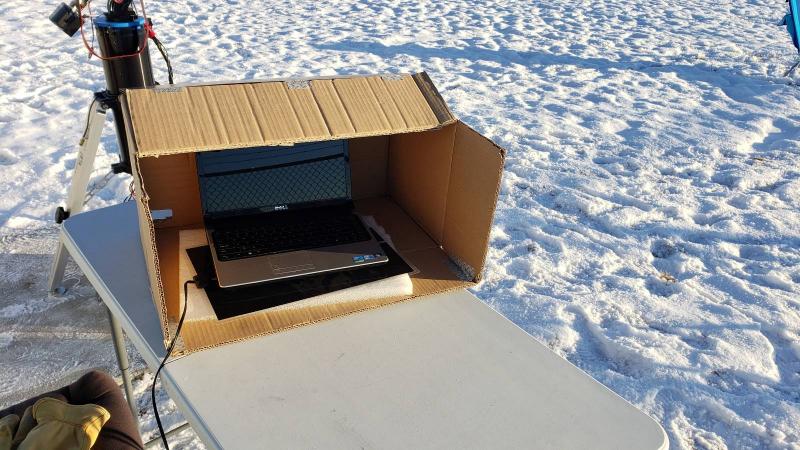 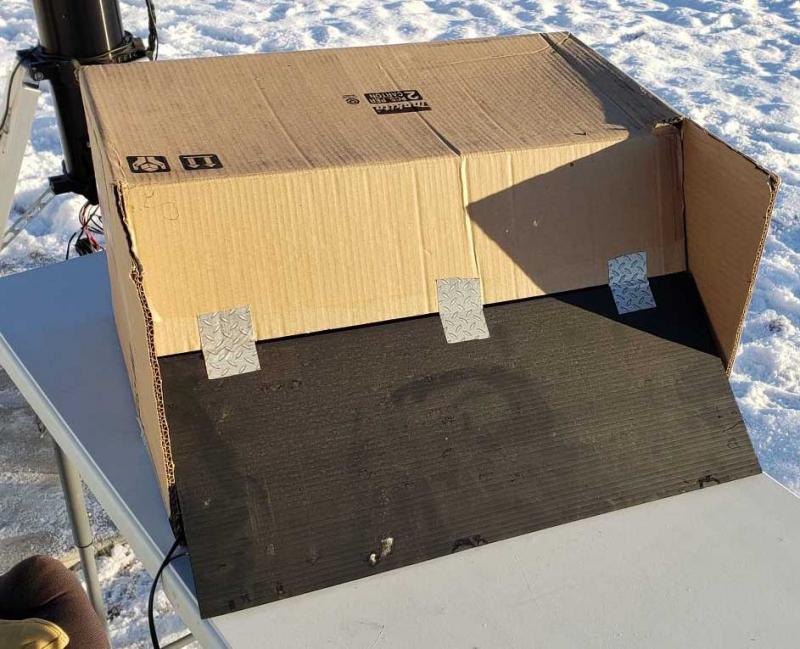 silly me, 12V to my distribution/dew controller box which has the 5V USB and 8V output for the camera, plus four 12V outputs, one to power my hub. so yes, whether at home or in the field, everything connects to the hub.

I have a cooler similar to this one; https://www.ebay.ca/...x8AAOSwLAlfRvCo except it also has a door on the lid that opens to grab a beer or something. I'll stand it on end, have a shelf on the top for the laptop and open the door when I want to see the screen. My power supply or battery will go on the bottom

I have some questions though.

- with AC, would you recommend I use the 70W power supply for the mount and the 12A Pyramid for everything else

- the power cable that came with my EQ6-R has a ferrite choke. I'd take it off and use it on a new cable if I power it from the distribution box. Would you know if any other power cables need them.

wouldn't mind knowing your name and location either

I use 10ga for the 15' run from my power supplies or battery to my distribution block https://powerwerx.co...tribution-block on the mount.  Then I make custom length cables starting with this https://www.digikey....0-01780/5638256 and putting PowerPole connectors on the end.

IMHO the dew heaters are the noisiest part of the system. So I would use the small supply for them, and the big one for the mount, cameras, etc.  I put a ferrite https://powerwerx.co...pole-connectors near my DIY dew controller. Probably not necessary now I have a dedicated supply for the dew, but I had it handy. I don't use ferrites elsewhere.

I cut the end off my EQ6-R power cable about a foot up from the power supply end, and put Powerpole connectors on each side of the cut. So I can use the cigar lighter end of the cable or the PowerPole end.  Or you use Powerpoles you could get one of these https://powerwerx.co...rpole-connector and not chop the power cable.

My location is in my profile

I will have powerpole connectors on my cooler and distribution box but I only have 16/2 bonded wire from Powerwerx, so a bit light on that. Other than that on the controller I have 5.5mm x 2.5mm panel mount connectors for the 12V outputs and the camera power which will be next to the USB so not mistaken with the12V jacks, and RCA's for the dew heaters.

which have #18 AWG leads. I'll also use them to make custom length M/F extension cables to connect to the male ends I'll have on my dew straps.

All my 12V buck boost converters are by DROK.


Also tagged with one or more of these keywords: Astrophotography, DIY, Imaging