How to attach Altitude encoders to dobsonians

4 years ago I shared a DIY project for building an inexpensive DSC which used an encoder for Azimuth but an accelerometer for Altitude, mostly because of the difficulty of attaching an encoder to the altitude axis of my Z114 mini dob or my Skywatcher 10" dob.

Recently, while working on a dual encoder version of my DSC, I found a simple way to attach an Altitude encoder to my Z114 minidob. It seems almost obvious now, but 4 years ago I couldn't come up with it, so I want to share the Z114 fix, and invite others to share how they have managed to attach encoders to their dobs.

So here's the rule for this thread: Share your solution for attaching altitude encoders for your dobsonian, regardless of whether said dob is commercial or DIY, tabletop or gargantuan, truss or solid tube. Hopefully this will aid others in figuring out how to turn their starter dob into a push-to.

For the Zhumell Z114 tabletop mini-dob, the key is using a GT2 open belt: 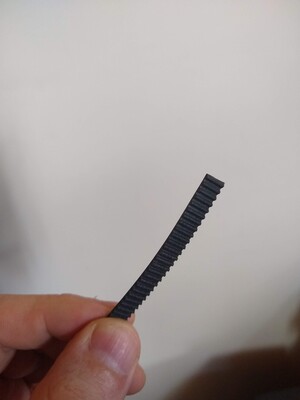 The Z114 OTA is held by a clam which connects to the wooden arm using a white nylon "bearing disc", of which you can see the edge in this picture: 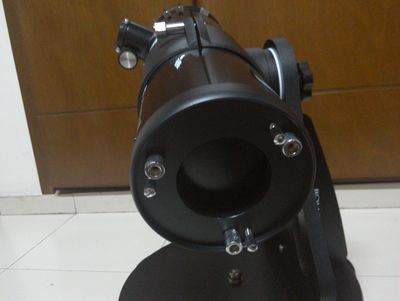 You can see that right next to the white nylon disc, the black cylinder has a little space where one could (using a silicone glue gun) attach a piece of GT2 open belt to turn the black cylindrical surface into a GT2 gear: 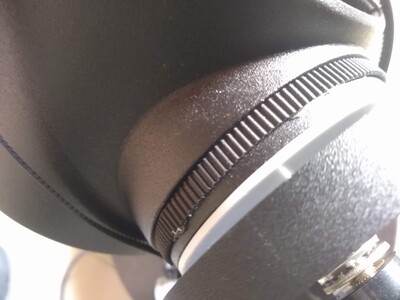 Now we can use a regular closed GT2 belt (I used one of 488mm length): 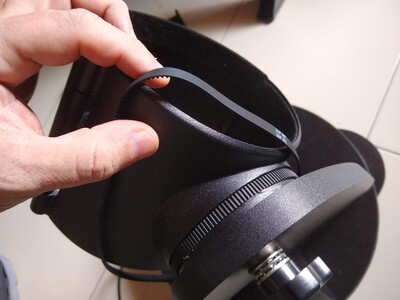 And fix the Altitude encoder somewhere to the side: 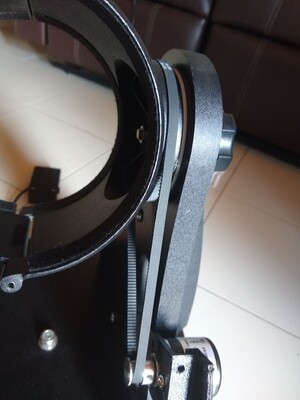 At first I was going to use an acrylic Pelican ruler as an encoder bracket, drilling a hole in one side to fix the ruler in position using one of the Z114's existing screws, and 3 holes in the other side to affix the encoder to it, and let gravity provide the tension: 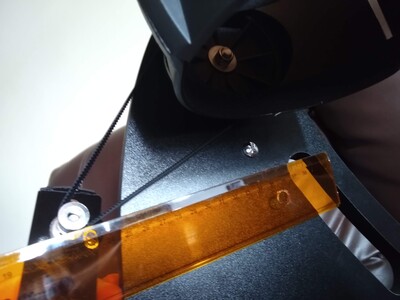 However, 3 years ago, pgrunwald printed some brackets for the SignWise optical encoders:

Specifically it is  "OH_Frame_SignWise.STL".   I was also able to easily raise the height of the mount using Autodesk Meshmixer by just selecting the top and extruding it 20mm.  The modified file is attached.

And he was kind enough to gift me a few (Thank you again!). It turned out one of them was perfect for fixing the alt encoder in a "click-in" removable way,  so that's what I used, although a drilled ruler + gravity would work too. 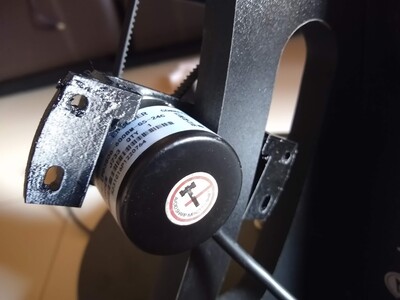 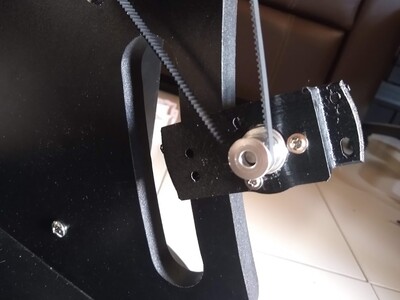 So, that's one way of attaching an Altitude encoder to a Z114. ¿What about your dob?

I've had (Lumicon) encoders on only two scopes: My homebuilt 10" f/5.5 and my 14.5" TeleKit. Lumicon provided a screw on flange with a center hole and set screw, plus stay-arm, for the altitude encoder.

No photos of the 10", here's the TeleKit 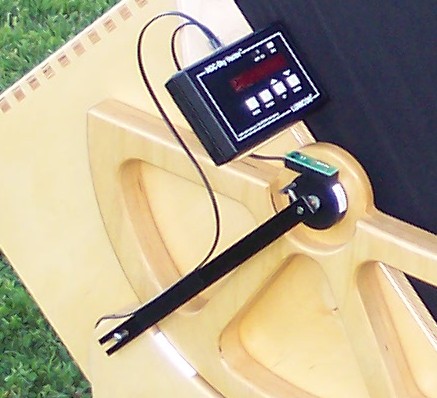 I made the trunnions, drilled a 1/4" hole for the encoder, then made some tangent arms, attached the US Digital S6 encoder to them and ran the cables to the Nexus DSC....

I’m happy to print at cost. Shipping USPS priority is $7.  PM me to tell me what you might want.

Last year I built a similar project, using 2 encoders and ESP32 board. I installed one on a 10" Orion dobsonian, one on a 12" Meade Lightbridge dobsonian, and now I am installing one on a 12" Celestron Starhopper dobsonian.

Below are some pictures of my 12" Lightbridge installation.

Here is a neat installation that does not require drilling in the mount: https://www.cloudyni...2#entry11062230

Encoders installation on 10" Orion base. I removed the intelliscope system and installed a SW OTA on rings

My 12" Starhopper I am working on right now

I'm quoting solutions for Skywatcher dobsonians from Ravi and stevo58:

Here are the construction details of my DSC:
1. I am using 600PPR/2400CPR optical encoders with 9:1 gearing; effectively 21600 counts per revolution.
2. I made the gears using 6mm thick plywood discs and glued 6mm wide GT2 timing belt on the periphery.
3. Altitude axis uses a 135 deg. sector of 360 teeth gear and a 40 teeth GT2 timing pulley fixed to the encoder. I have fixed the gear sector to the altitude bearing using three M4 bolts & nuts. 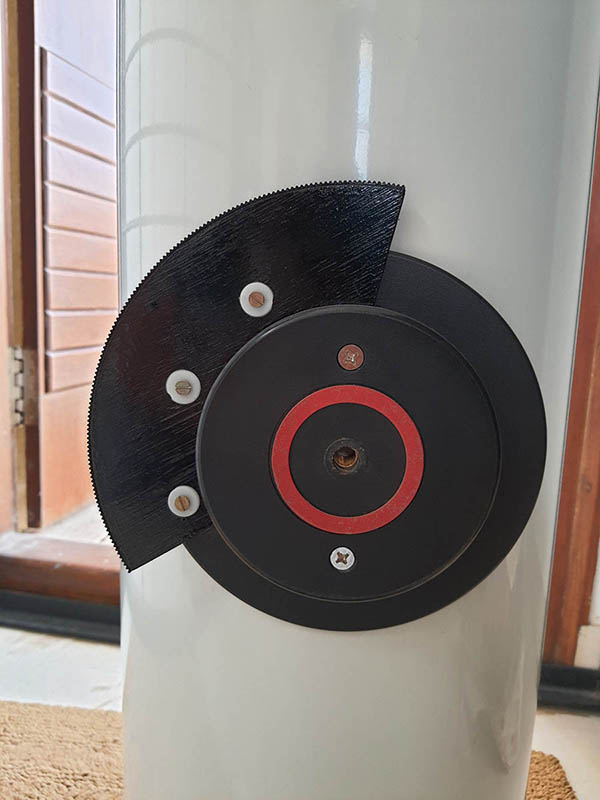 4. I fixed the encoder to a 50mm aluminium L angle and fixed it to the rocker box using a 75mm long SS door hinge. I can engage or disengage the encoder by just “opening” or “closing” the hinge. 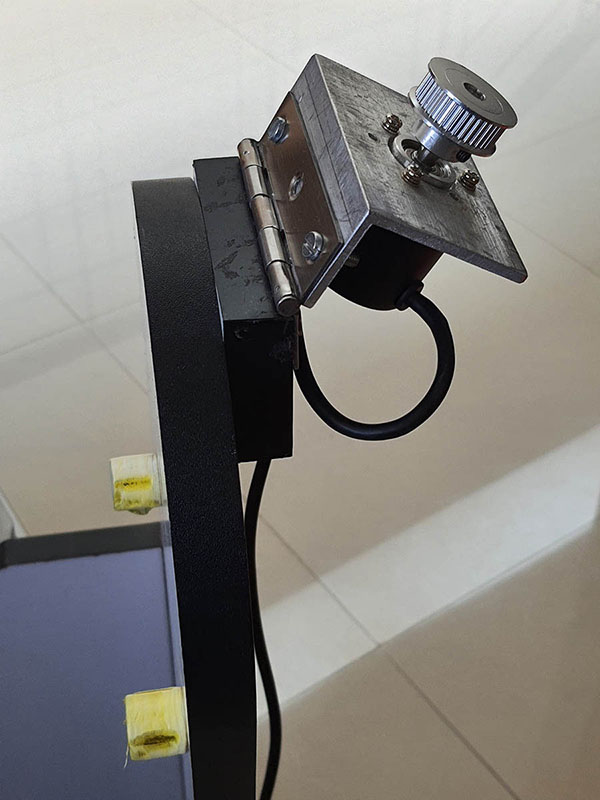 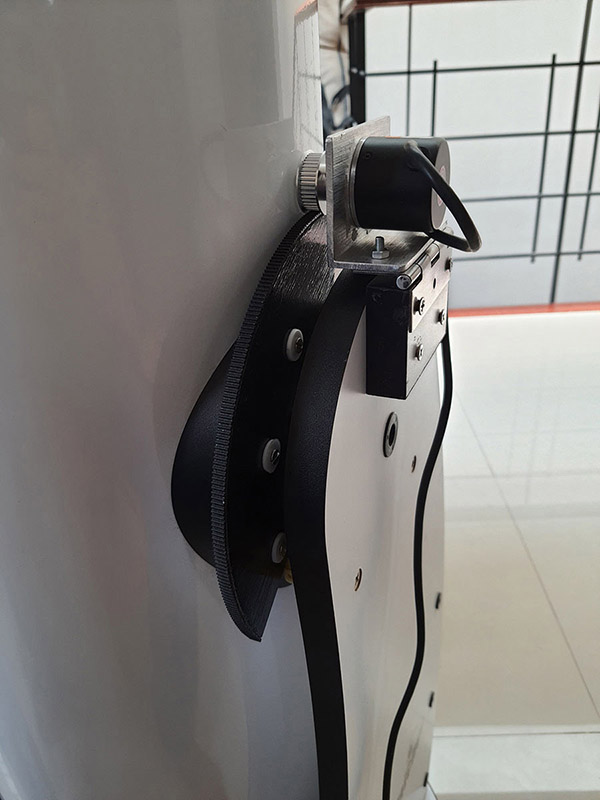 5. Azimuth axis uses a 180 teeth gear (again made of 6mm thick plywood and GT2 timing belt) and a 20 teeth GT2 timing pulley. I replaced the azimuth axis bolt with a longer one and  fixed the gear to it. The encoder is fixed to a 50 mm aluminium bracket and is lightly tensioned against the gear using a tension spring.
6. The encoders are connected to Arduino via a cat6 cable (because I'm going to fix the circuit to the platform).

I just replaced the non-adjustable handle with a length of 10mm threaded rod on my SW.  I’m using a 60-tooth GT2 pulley, though, so I don’t have the same resolution (“only” 9000). I ground a flat on the rod at the right point, put a fender washer between the pulley and rocker, and tightened it down. This has worked fine for me, and it doesn’t take any longer to knock the scope down than it did before. If it starts to have a problem, a bit of non-permanent LocTite will take care of it.

It would also be simple to put a larger pulley or higher pulse encoders if I decide I ‘need’ insane resolutions like 50-75k. 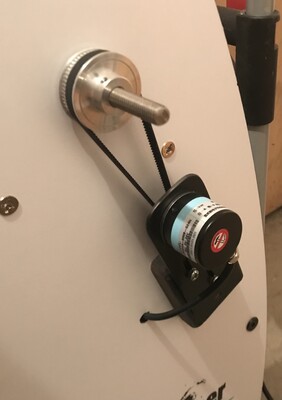 I was able to use 2 600 p/r encoders, installed on an AWB OneSky, and am very happy with the results. 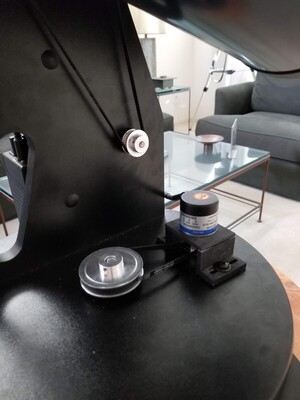 Fortunately there is just enough room on the OneSky's alt bracket to hang a belt (shamelessly stealing from Adun's idea in another forum). I worried originally about lining the belt up just so - but if you think about it, there's always going to be a point that doesn't need contact i.e. you'll never point the scope straight down. So you don't have to be exact when gluing a belt fragment tooth-side up to the alt bracket. 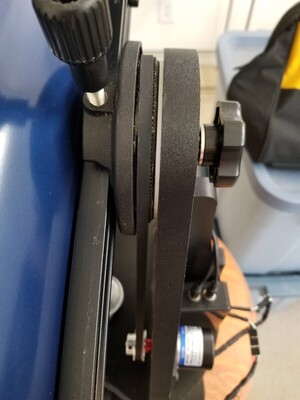 I wanted to keep the handle grab accessible, so drilled a hole thru the other side of the mount upright and ran a coupler (as short as I could get it) thru from the encoder to the belt pulley. (see the little red barrel sticking out?). Drilled the hole a little oversize to allow for tensioning the belt (doesn't have to be much) 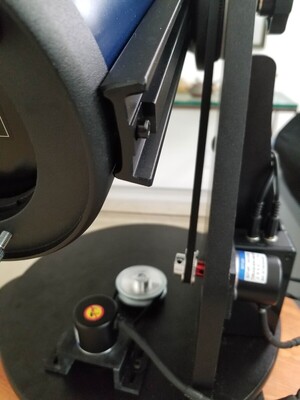