I have been in and out of the astronomy hobby for the last 40 years and have acquired numerous eyepieces and accessories and have had several telescopes. In 1994 while living  in Guilford, CT., I purchased a Technical Innovations 10' Pro Dome and built an observatory in my backyard to house a C11. After a few years I moved and had to disassemble the observatory and so, in the hopes of building a new observatory in the future, I have had the dome in storage for the last 25 years. Here's the original observatory in 1995. 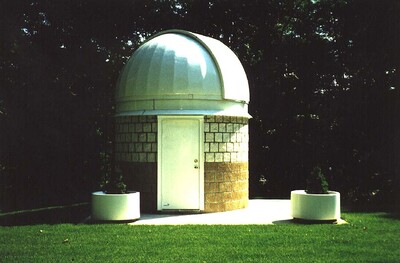 Over the ensuing years I dabbled in astronomy but never really lived in places that had good seeing conditions. In 2008 I lived in Milford, CT., and although the local seeing conditions were poor I lived across the street from Long Island Sound and looking over the water to the southeast the sky was dark and inviting. Wanting to get back into the hobby I donated my C11 to my son's school science department and purchased a Mead 16" 200R. What a beast! The only way to utilize the scope was to put it on a modified wheely bar which allow me to drag it out on the driveway whenever there was a clear night. Over the next few years I purchased several upgrades. I had the scope Supercharged by Dr. Clay at Arkansas Sky Observatories. I installed Van Sky Instruments 3" Omegatoad focuser, 4.5" manual Zerotator, and have a 2" Hexagonal Turret. I also purchased a Denkmeier 2" Dielectric Diagonal with power and filter switches. Finally I also purchased a BIPH Night Vision eyepiece. All this is mounted on a modified Milburn Wedge.

In 2017 I moved (hopefully the last time!) to the North Fork in eastern Long Island. The sky's are dark and clear and after a few years of contemplating building an observatory I finally decided to take the plunge and begun construction this last March. I wanted a full size entry door and  spiral stairs with a trap door for the elevated observing floor. I have a limited budget to work with and given the costs of pouring a proper round concrete pad, as well as the desire for concrete block walls, I settled to construct the observatory out of wood with the exterior walls wrapped in PVC sheeting. All work was performed by myself with the exception of mounting the dome and, when ready, installing the scope.

Concrete footings are 12" diameter, 42" deep in undisturbed soil. I would have gone deeper however the soil turned to sand/gravel and the sides of the bottom of the holes were collapsing. Also sand is hard to dig out of the hole and would simply fall out of the post hole digger. The pier foundation is 24" x 24", about 48" deep. Re-bar is installed in all concrete work.

The framing is composed of 2" x 6" PT wood supported on 6" posts, with 2" x 4" PT lumber is layed across the joists to support the floor. All are treated with wood waterproofing and a white deck paint. Chipped stone is on top of weed cotrol fabric which (will) extend 2' beyond the wall edges. The pier was extended up to just shy of the elevated floor level and then a 10" sona tube will extend the pier to final height. Total weight of the pier is about 3,680 Lbs.

Base floor complete with holes for electrical, ground rod and internet. . The plywood floor underside is also waterproofed and painted white.

Wall construction using 2" x 4" at 12" OC. The top ring will be made of 2 rings, each 3/4" thick. No nails were used in any structural construction, all screws or bolts.

Stairs and elevated flooring being installed. Observation floor is 54" from base floor.

Versatex PVC sheets are bowed around the wall studs using clamps along the top ring and sides.  PVC was chosen as it would bow nicely without undue stress, is waterproof, rot proof, insect proof  and won't yellow or fade due to sunlight. A nice clean white look. I wanted 1/2" thick sheets for strength but was to stiff to bow so I settled on 3/8" thick. Here the door and PVC sheets are installed.

I laid out the TI Pro dome in the yard to power wash and clean it after so many years in storage. There were a few cracks in the flanges I had to repair and it was in rough shape. Old yellowed silicon was still stuck on most of the seams. It looked like a lot of work just to remove the silicon so I looked online as to how to remove it. Most everyone seemed to thing hard elbow grease was the only way and that no solvent worked very well. To my pleasant surprise power washing did the trick. High pressure water can peel paint of most anything but the Gel coat was unaffected and the silicon peeled off by putting the nozzle right up close to the area. After power washing the dome was is surprisingly good shape and the gel coat still looked good.

Before install the dome I ensured the wall ring was level and added shims as necessary to get it within an 1/8" as best I could. When building with wood no matter how level one starts out small errors compound themselves as you go up. The ring was off almost a 1/2" in some areas so shims had to be added.  Here the rotation ring and circular skirt are installed. The skirt is used to keep rain out of the seam between the wall ring and the dome rotation ring.

Finally the dome itself is on! I hired two extra people along with my step son to mount it.

I've sealed the dome and have been doing minor work for the next week or so before it finally rained. Now I could check for leaks. There was only one minor leak in the dome which I have hopefully resolved. I have poured the final extension of the pier with electrical outlet installed out the backside. I had a steel adapter plate made to mount the wedge and now have the scope's control panel and fork arms installed. I hope to have the OT installed this week. Electrician is coming next week to see what needs to be installed and run power from the house.
Once power is installed and I'm up and running I'll post some updates on any progress. I still have a lot to do just to get all the basics done let alone interior walls, trim, flooring, etc....

Clear sky's to all!

Thanks, Steve, for posting your interesting project. You have shown a lot of ingenuity and perseverance - two qualities essential for any DIY observatory. Best of luck and clear skies!!

I love it when old equipment gets a new lease on life.

Keep up the good work, post pictures of the inside when you get that far.

Looks great, Steve.  I'm intrigued by your spiral staircase.  Would love to see more images of that. May try to do the same in my observatory.

Looking good!  It should be great when everything is finished. I helped unmount and remount one of those Meade 16" once, heavy suckers, you'll want plenty of help.