What is your favourite nv monocular/scope/filter/eyepiece combo?

There have been several threads about best scope for nv or best filter for nv, but in my experience it is the combination of all aspects of a night vision setup that is key to delivering the best views. I had a great nv observing session last weekend and currently my favourite setup is as follows:

What is your favourite nv combination and why?

I also attach some phone photos of the views from last weekend through the above setup.

Here are the Soul, Pac-Man, Cave and Lobster Claw nebulae

From the same setup is the Elephant’s trunk, Eagle and Crescent.

And last but not least, the Veil

From my home site I have views of nearly 100 of these incredible clusters that all have their own separate features to dazzle the eye.  With only a ten inch scope I can see stars that, under best sky conditions, fall just shy of 18th magnitude in some very small and dim clusters.  But even the major ones take on a whole new meaning with this setup as they blossom into many, many hundreds of pinpoint stars of vastly different magnitudes.  Most interesting of all, to me at least, is that these views are not duplicated in published images.  They are absolutely, uniquely my own.

Can you see the difference between Carson pvs-14 and Actinblack pvs-14?

Do you have a fairly noticeable vignetting, have you tried to reduce it by removing the diagonal (for example) or any other effect?

Where is the filter located?

I, of course, have not tried all intensifier, filter and scope combinations nor have I observed in dark or semi-dark locations. I don't have favorite targets so more scopes are deployed. What works for me at my light polluted location are…

All at Prime Focus, the short stack and simplicity has appeal for me.

1. The 102mm refractor reduced to F3.5 for ultra wide fields
2. The C8 reduced to F7 or at F10 or at F20 for globular clusters and galaxies
3. The Tak TSA 120 reduced to F5 or Barlowed as a “single-scope solution” that delivers good wide field views of most objects and can also be Barlowed for clusters.

All scopes are very portable and can ride on simple, single or twin-scope alt/az mounts.

Going larger would, of course, be nice but portability is lost.

What didn’t work were the .5, 2” reducers, the 7nm filter was okay but the 6 is better, the 610 pass is too weak for my conditions, goto GEMs are okay but IMO manual alt/az works better, as you can rock the scope back and forth to tease out detail.

5-plus years using NV and the views still amaze.

I have experienced an APM 100mm bino-telescope, but with glass eyepieces.  In my limited experience, bino-telescopes excel at providing a relaxed view, with both eyes open, while providing a brighter combined image than a single scope of equal aperture.  And a bino-scope image sometimes looks 3-dimensional.  With two NVDs, it is easy for me to imagine why Gavster chooses this system as his current favorite.  It's not as bulky as a larger Newt and provides the sharp stars of a refractor.  There isn't much to dislike about that system.  Gavster and I communicate often to discuss discoveries and equipment, so his favoritism is not surprising.

I don't think I can claim either a best or a favorite setup for my Mod 3C NVD; every optical system I have used has offered something different.  None of my optics offer a huge aperture because I almost always travel to an observing site.  My red-zone home is not really pleasing; limited sky access, numerous street lights, neighbors' yard lights, another neighbor's little dogs yapping at me for being in the alley at night, etc.  By choice, I have kept apertures smaller for portability... because 40 miles away and 800' higher, is a green zone that offers pretty nice views of the sky with the only sounds coming from distant cow bells or the song of coyotes, which I enjoy.  BUT, my main emphasis is not visual observing; the vast majority of my time is spent with my phone attached to my NVD,  taking short exposure images.

I take NV images to see more, and see it better.  My phone with NightCap camera app, pretty much eliminates the noise I see visually when using H-a filters; for me this is of great benefit.  Declining eyesight with age related issues have brought me to this solution.  Since about 2018, I have used 3 or 4 camera lenses and an 8" Newt.  The camera lenses provide 2x, 4-5x & 11x to show how things fit together in the sky.  The 8" Newt serves to provide a good reduced, native or barlowed image from ~22x to 60x, with a smaller FoV.

IC 1396 is a very large cloud of H-a that also contains several Barnard dark nebulae.  But IC 1396 is not an isolated nebula.  It resides in a huge cloud of much less dense H-a that is not documented on most charts.  Below are three photos at different scale.  The first is with an 8" Newt w/2x Barlow of the Elephant's Trunk inside IC 1396.  The second image is with a 300mm lens which is marked to show most of the Barnard objects in IC 1396.  Last, is a much larger swath of sky that does reveal some of the faint H-a that surrounds IC 1396.  They each serve to show a different aspect of this much photographed nebula.  The H-a filters used for these images include a 12nm and 7nm for different subject matter with different needs through different optics.  I look at H-a filtration differently than I did 3 or 4 years ago.  They are all useful in prime phonetography, but some are more useful than others, depending on sky conditions.  And I see my 3.5nm filter as a specialty filter, rather than a general use filter like Gavster, who's equipment is optimized for afocal use.

I have been fortunate to use my NVD in a variety of other optics when observing with friends.  Some have even loaned me their scopes for the night!  Although it is amazing to see the advantages of using NV in a fast, 20" goto Dob, the disadvantage of cost or storing and moving that scope, make it unrealistic for me.  There are always tradeoffs and limits.  So the old adage still rings true, "The best scope is the one you use." 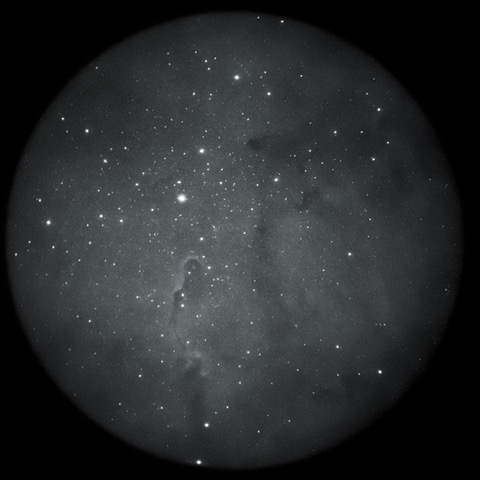 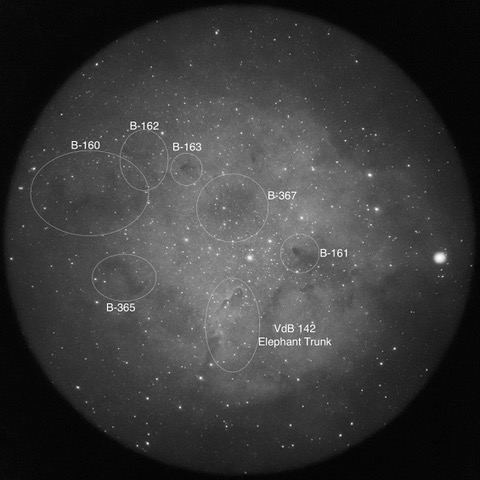 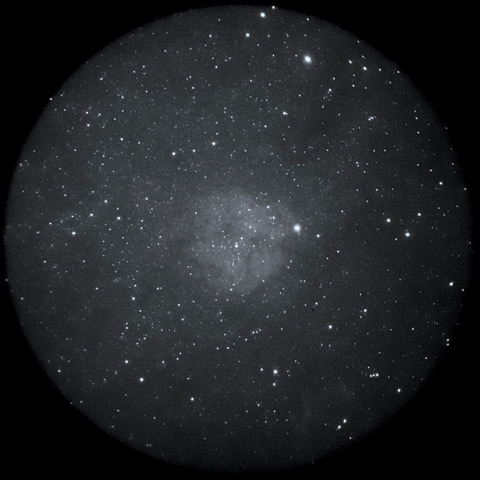 Here's another good example of how scale changes the appearance of M31.  The first image was taken with the 8" Newt, ISO 200, 1/5s averaged 10s.  It reveals the core and double rings of the galaxy quite well.  But the second image, taken with a 300mm lens, shows the galaxy's extent much better, taken at ISO 320, 1/6s averaged 15s.  To me, one system was not better than the other... just different. 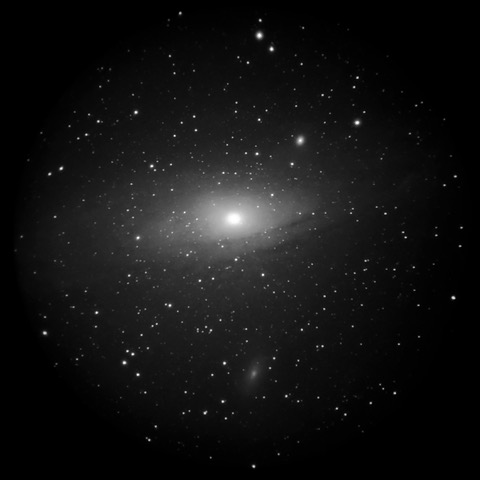 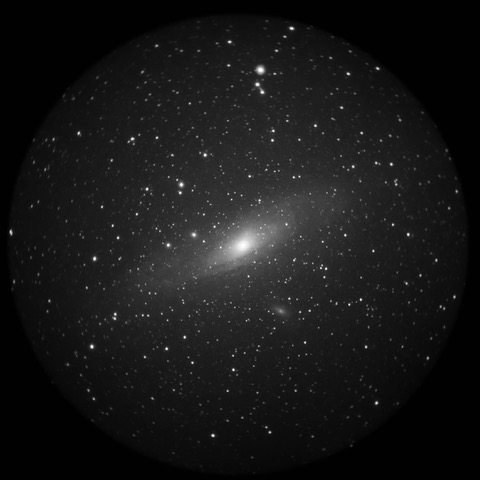 who uses some great (and diverse) optics.  Images in his gallery are the absolute best NV images available.  Although phonetography has come a long way in the last 4-5 years, it still has a ways to go!

I'll keep at it though, as long as I'm able.

When Gavin started this thread I thought I should include my favorite setup for emission nebulae as well. I had used many different lens and filter combinations but I think I held back as I had a premonition that the best was yet to come. I now can assert my killer setup is my Nikkor 200 mm f/2.0 lens and NVD Micro coupled together by a N-to-C adapter containing the new Baader Highspeed 6.5 nm H-alpha filter. This lens is only 9 inches long and rides easily on a lightweight tripod. As I described in another thread, my first outing with this new arrangement was magical. The 5 degree FOV is just right and the brightness and resolution of the nebulae in the eyepiece simply took my breath away. As an example I would like to mention Sh2-129 which is adjacent to IC1396. Previously, I enjoyed this one on good nights as a somewhat bright bar with short, faint extensions. The other night with the Baader filter those extensions brightened and grew to equal the length of the main section. Literally I was seeing almost exactly the same image that is shown on page 25 of the October 2019 issue of S&T where the MDW Hydrogen-Alpha Sky Survey is discussed. Those images are four hour collections through f/4.5 optics with high sensitivity FLI cameras. Seeing essentially the same in real time is an experience that I never dreamt I would have.

Looking at these phone images I took here (at a dark sqm 21 site) and comparing them to these more recent ones which were taken from London (sqm 18), the impact of light pollution when using nv is clear! Although different scopes and eyepieces were used, the image scale and effective speed were quite similar.