I have a ZWO 294MM that I use for galaxies and a ZWO 294MC for nebulae. I have been picking which camera I want to use for the night and sticking with that. I do not like to switch while viewing because that requires capturing new flats. I have a light panel, so doing flats is not that bad but it still takes about 10 minutes to switch cameras, capture flats and focus. Because of this, I only do it once at most.

I recently saw the Baader FlipMirror II Star Diagonal and thought about attaching both cameras on that. I attach the camera that I plan to use the most for the night on the straight path. Then the other camera on top. I know that adding more glass to the light path is non-optimal, but this is for EAA so I am not looking for the perfect image. I still can get a backfocus of 105mm.

I can capture flats before the night starts and then switch between them. This assumes that the flip mirror position is the same each time for the flats. Now if I wanted to switch cameras, all I need to do is flip the mirror and then focus using my focus motor. I think, this should only take about a minute and would be easy to do. Doing this a couple times a night would not be a big deal. Especially once I have the focus motor position for each camera.

Thoughts on this idea?

Very interesting idea. A few things that popped up in my mind:

- If using reducer, the back focus distance would need to be carefully setup. That would mean that both cameras should come to focus at the same point on the focuser.

- It will be good to verify that the flip mirror doesn't introduce any internal reflections.

I am using a 6.3 reducer but I am not worried about the focus because I have a focus motor. Once I have the focus position for each camera, I can quickly switch back and forth.

I would not expect any internal reflections on the straight path. As to the angle path, that is one thing I am worried about but it is one of those you won't know until you try it.

Why would the extra weight be a problem for the focuser?

How are you saving time? You must still do seperate flats for each camera? You just do them at different times. I rear mount my ASI294 behind a x6.3 reducer and leave it in place when I bolt on Hyperstar/Atik Horizon to the front. Chang8ng from f/6.3 (actually nearer f/5.2 through my diagonal) and f/2 produces a more meaningful switch. I think you will over complicate things with a flip mirror.

I am using a 6.3 reducer but I am not worried about the focus because I have a focus motor. Once I have the focus position for each camera, I can quickly switch back and forth.

I would not expect any internal reflections on the straight path. As to the angle path, that is one thing I am worried about but it is one of those you won't know until you try it.

Why would the extra weight be a problem for the focuser?

It's 0.8 lb of additional weight for the flip mirror and camera. But I see now that you might be using an SCT, not a refractor. It should be fine with the weight.

That will add approximately 100mm to your optical chain.  Can you accommodate that?

Noah4x4, I must not have been clear on the flats. I meant that it saves me imaging time. Right now when I switch cameras in the middle of the night, I need to capture a flat then. Last night I timed how long it took me to switch cameras and capture a new flat. It took 13 minutes. Since I normally spend about 5 minutes per DSO, that is two DSOs that I missed out on.

Now in theory with the flip mirror, I attach both cameras and then before I start viewing for the night I capture the flats for both. Then when I switch cameras, I don't need to capture a new flat. I find for me that there is a significant difference between the mono and color cameras that having easy access to both would be great.

I decided to sell some equipment to fund the purchase of the flip mirror. I was so happy that it arrived on the weekend and on a night that would be clear. That rarely happens with a new purchase. 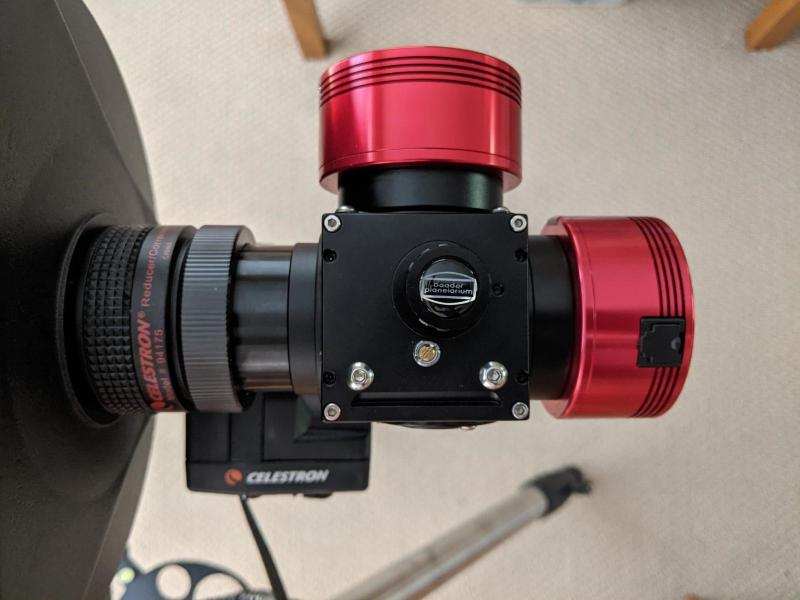 One downside of the flip mirror is that it leaks light. So doing flats or darks during the daytime means wrapping it all up. Which I did and the flats came out fine.

I spent the first part of the night viewing low Messier globular clusters that I had not seen before. Then when I decided to go view planetary nebulae, it only took me 3 minutes to make the full switch. Less than 1 minute to walk outside and flip the mirror. After doing my polar alignment, I had found each camera focus point on the focus motor using the Bahtinov mask on a high altitude star. But going to the low objects had a different focus point. I used SharpCap's FWHM focus feature which took about 2 minutes. As I get better at using the FWHM focusing tool, I would expect to get faster.

The next time out, I will image the same object (high altitude), probably M13, with one camera and then flip to the other to compare the images. I want to make sure the top camera does not have any serious image degradation issues because of the mirror. But given last nights performance I don't think this will be the case.

Pros:
• Can reach backfocus
• Quick and easy to switch cameras. A flip of a switch
• Can attach the two cameras easily
• Can rotationally adjust the telescope side and rear side

Cons:
• Cannot rotationally adjust top side
• Light leaks in so need to cover up if doing flats or darks during daytime
• Cannot attach my filter drawer because of backfocus issues

Overall, I think I will like this setup. I need a couple more observation sessions with it to make my final decision if I will keep it.

Nice mini-review. I'm curious whether the light leaks are bad enough to affect nighttime captures? Do you notice any difference in images at night if you cover the leak areas vs going uncovered?

I did not notice any light leaks for my nighttime captures.

Because I like to capture my flats and darks during the day, I have made a light shield using 2mm foam roll. Using this completely fixed the light leaks. My darks looked perfect with no light leaks. This solution should work fine for me since I don't change my image train often. 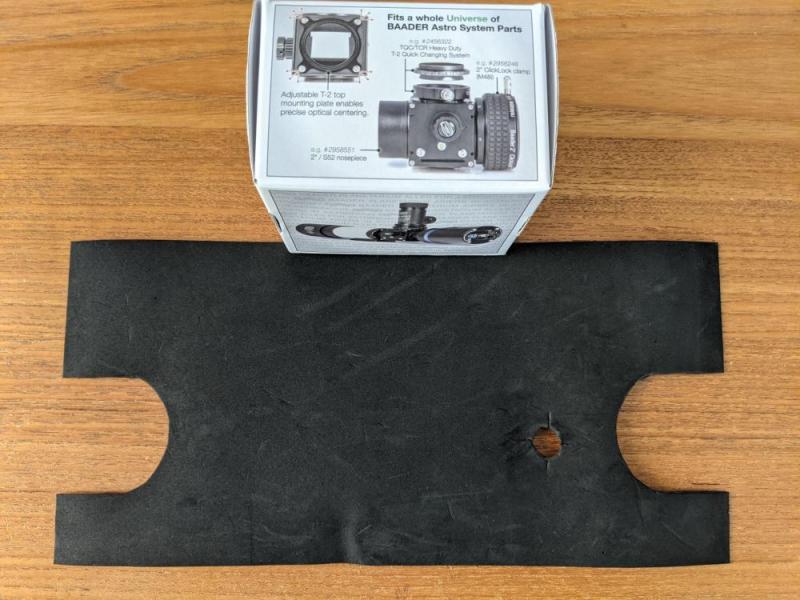 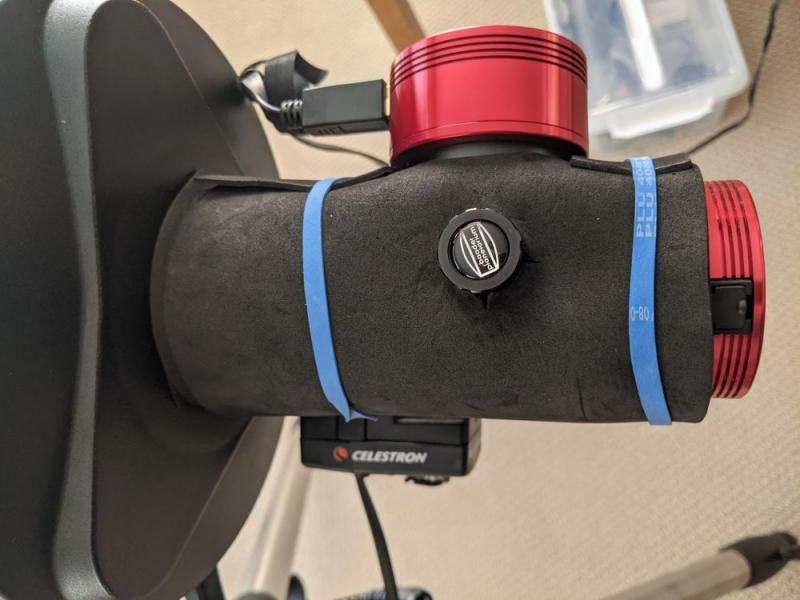 Now that I have a couple sessions in, I can say that this has overall been working well. The other night when I wanted to switch cameras: I walked out to the scope, flipped the mirror, set the focus motor to the previously calculated position (I found the focus position for both cameras after doing polar alignment) and I was good to go. Took 90 seconds.

Two issues that I must deal with.
1 – The top camera image is flipped, which makes it a little hard mentally when comparing the image to what I see in SkySafari or Stellarium. I will need to create a new set of darks using the flipped setting in SharpCap to get around this issue. Question: Can I simply flip the darks I have already captured using an image program?

2 – Given the size of the sensor, it is important that the top camera be aligned. This is a pain because there is no way on the flip mirror to adjust the camera rotation. I had to add shims to get the camera properly aligned. This probably would not be an issue with a smaller sensor.

The image below is of a flat that I have stretched to make obvious the strange vignetting with the camera not properly aligned. 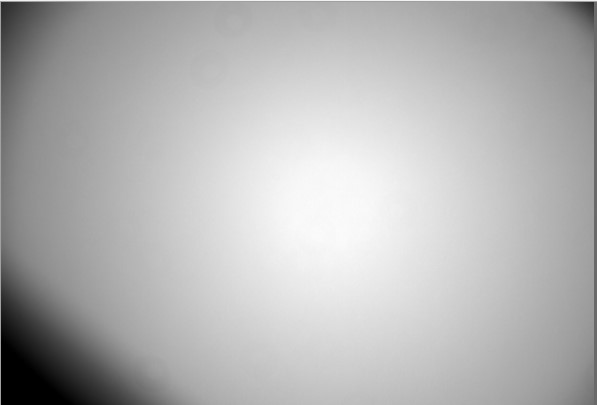 This next image is with the camera aligned and the flat stretched again. 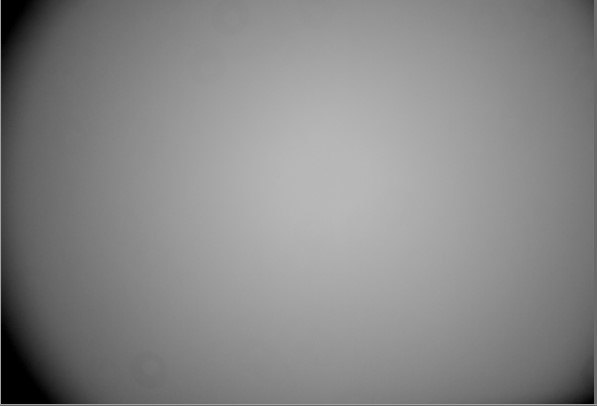