I haven't imaged in a couple of years.  Trying to get back in the swing.  I have imaged mainly with a C14 on a CGXL with a ST80 and a ZWO 120 mini to guide and using a HyperStar/ZWO 294 MC Pro to image.  This made me pretty lazy with polar alignment and tracking since most images at 1 minute or less in the stack.  I got a 0.65x large format focal reducer from Starizona last year and have just now got around to trying it out.  I have tried a couple of nights with the same results - enlongated stars.  At 300 seconds it is obvious.  I think I had good polar alignment according to SharpCap.  I have never tried to image at focal lengths like this (2560 mm with focal reducer).  Is this a flexure issue with the external guide scope or an issue with my tracking/PhD settings.  I have a Celestron off-axis guider but had no luck when I first attempted to use.

Any tips would be great appreciated.  Tim 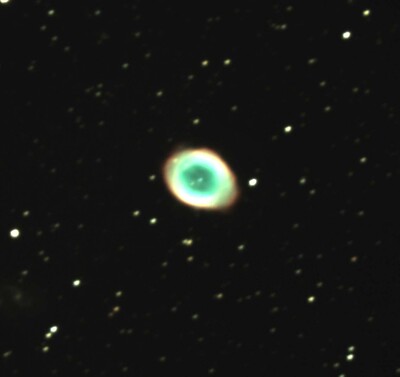 NOTE EDIT - My apologizes.  I posted the wrong image of M57 initially.  The previous M57 image was from a few years ago with the HyperStar.  I knew that looked too nice... :-(

Could be a slight collimation issue, how do the stars look out of focus?

Could be a slight collimation issue, how do the stars look out of focus?

I thought that was the issue and came back the next night and defocused on a bright star.  The donut looked perfectly systemetrical.   tim

That doesn't look like a guiding or flexure issue. Looks more like the scope is slightly out of collimation.

Losmandy DVR108/66 Three-Ring Autoguider set attached to the top rail.  I verified all the screws at snug.  The sample image is actually one of my best (least elongated).  The imaging I tried a few nights ago was much worst even when I reduced to a 60 second image.  PhD looks to be do its job and SharpCap gave me an "excellent" for polar alignment.  I am running darks and bias frames tonight so I can't get a sample to so.   Tim

Not calculating pixel scale but intuition says that it's pushing it.

Differential flexure is when the guiding is good (low RMS) but the stars are bad (as in your image). So how was your guiding RMS?

If I had to guess without that info, I would say you need to improve your guiding. Make that Celestron OAG work! Many times the frustration with an OAG especially in star-sparse regions, is that the exposure length is too low. Go up to 5" or even more (assuming good polar alignment, and it should never be less than perfect) and you will find stars with sufficient SNR to guide on.

It's worth the effort (actually, if one is routinely imaging with a C14, and assuming they can afford it, an ONAG is the way to go) to get the OAG guiding going and a good PA routine.

BTW, when you defocus the star a lot, it will usually *look* collimated, but won't necessarily be. Collimation is a process--you defocus, adjust, defocus less, adjust again (always recentering) and keep going till you are collimating *in* focus at 600x or so. Again, the effort pays off.

Hard to say from one image.  There are some tests you can run.

Try several exposures at each of several different durations, say 200 seconds, 400 seconds, 600 seconds.  Poor guiding should show approximately the same eccentricity regardless of length, as long as the exposures are reasonably long.  Differential flex will elongate stars more as the exposures get longer.

Another test: run an imaging session all night using long exposures.  Take a look at the eccentricity in the stars by blinking through the images.  With differential flex, you should notice a change in the angle of the eccentricity over time.

But I agree with Stelios.  With a C14, an ST80 is insufficient for good guiding.  An OAG would give much better results.  And as he points out, another way to determine differential flex is when your guiding appears to be good but you still get elongated stars.  Keep in mind that guiding only knowns what's going on in the guide scope.  It has no idea what's happening with the imaging scope.  So guiding can look fantastic and you can still get lousy images if you have differential flex.

In your case, it's likely differential flex (or more accurately, differential movement), and it would undoubtedly come from the fact that your SCT has a moving mirror which will shift position slightly during the night as the angle of the scope changes relative to gravity.  Only an OAG can compensate for that.

Thanks for the input.  I will run some of the duration test first.  Then back to work on the OAG.  Never considered the mirror flop issue.  I usually work with the HyperStar so locking the mirror and using a rear focuser hasn't been an option.  Might be time to consider that if I want to continue at this focal length.   Tim

I have RC10 and after switching to OAG, there is no more issues. OAG is a must for high focal length scope.