A Shadow Transit Is Underway

Seeing was below average at first and I couldn't detect the shadow until it moved in somewhat from the limb (about 4:20).  Seeing improved as we got closer to dawn.

I was surprised at how tiny the shadow appeared--probably a function of how distant Europa was from the planet.  Oval BA was also visible.  I made a sketch and will post it later today.

I got up at 4 AM and went out to see this Europa shadow transit and also view Saturn.  I was using the 8” Meade ACF and the 76mm Tak.  Europe’s is the smallest of the four moons closeist to Jupiter as it has the smallest diameter.  It was seen with both scopes fairly easily but the Meade being much brighter offered a good view up to 200X.

Here's the sketch of this morning's shadow transit.  I made the sketch observation in integrated light (IL) but leading up to the sketch time I examined Jupiter's appearance with W11, 21, 56, and 80A filters.  I thought Oval BA was to the south but the central meridian is wrong for BA--it must have been some turbulence in the South Tropical Zone cloudtops. 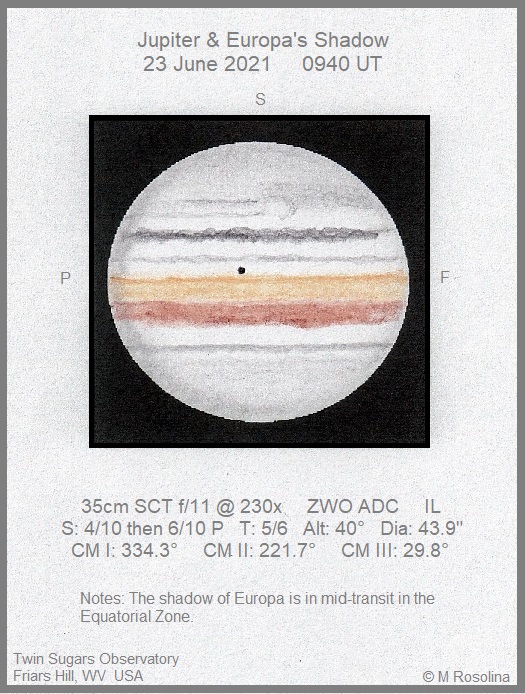 I saw it last night but I wasn't sure if it was a spot or a moon transit. Last night was pretty good seeing but not the best so far this year and tonight is very turbulent. I could only use a 17mm plossl as high power on the moon and Saturn was just dancing around and around so I gave up for the night.