Apologies, but I suspect my piccy is drawn a bit wrong there.

I just rechecked, and R4 is only 10 ohms so registers as "connected"

when i do a continuity test.

Basically, the outputs from the mosfets go to the pins on the 2 pin motor header.

that sits in parallel with the motor

( I know these as a "Zobel Network" from loudspeaker designs )

As such, you could do a test to see which ends of R4 connect to C3

The other ends of R4 or C3 must then connect to the header pins.

Do a continuity test to see which is which, but beware, look for a true zero resistance

Just rewalked the mosfet to output header again and have redrawn it.

You could solder to the relevant end of the R or C, but it looks tight :-) 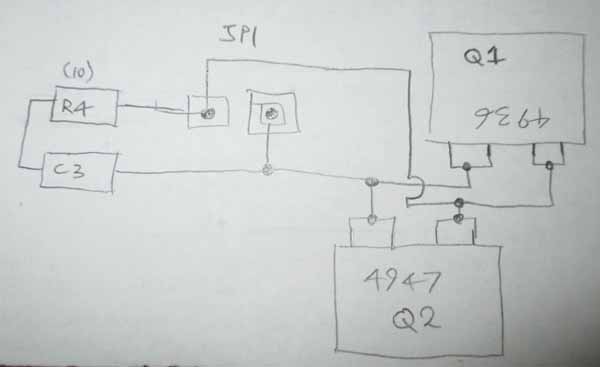 I commented earlier that

and my guess is C20 is a filter cap going to ground.

In this, the author noted that he put a cap in parallel with the gate pullup resistor R2.

( i thought this as there are 2 vias there )

However, when i look closely at the later PCB pics,

it looks like the new caps are actually fitted as per the link :-)

ie the R6 and C21 pair appear to show clear traces connecting the parts at both end.

As such, my guess is both the vias at the end or R2 and C20 are actually connected to +12V

Two days to realize that there was a second page

Was waiting on page 1 !
Thanks for latest drawing !

So I can solder the bottom of my blue-green line directly on R4 as shown below !?

ie as per the eev paper.

Dont know. By PSU pin is that your power supply???

Also, try the resistance between the top of the C21+R6 pair,

as that should be wired identically to C20+R2

but feeds the second gate.

So I can solder the bottom of my blue-green line directly on R4 as shown below !

All looks good then.

and see what happens.

Will solder last wire, check if bridges then connect to PSU.

Later, after testing if Ok, I think I must put something to hold those wires together and unmovable in order not to break connexions ...
Should I use hot glue for this ?

Should I use hot glue for this ?

Meade use it everywhere else, so i dont see why not :-)

Ok I completed  the wiring and checked for shorts.

Got Bienvenue message / 0 to Aalign or MODE

Then I enter the Date / Time / Daylight Savings.

As soon as this is done RA motor starts at full speed...
While the motor is rotating I can enter Setup / Targets and change to Terrestrial

Then the motor stops.

Now I can change speeds, DEC is following the changes but all manual RA moves are still at full speed !

Is it really bad, doctor ?

OK, if when in terrestrial, the RA runs at full speed, ( but under control )

ie if you press fwd it goes fwd and rev goes the other way,

and it starts and stops under command,

then its an encoder feedback problem.

The LX75 uses a slotted tin foil disk with exposed LED/Receiver for feedback.

On getting a move command, the motor card PIC keeps increasing the PWM

until the encoder feedback says it has got up to speed.

If you get bad/damaged feedback, you get less pulses than expected

and as such it keeps upping the PWM

as well as a badly fitted encoder disk

This will try to find the best current to give a 50% duty cycle on the feedback.

If that doesnt work, you need to investigate the LED and feedback.

The LED is IR so you can see if it is working using a camera viewfinder or webcam.

Otherwise, you will need to look at the receiver power supply

then A/B lines to see whats not working.

It might be a damaged trace or a blob of solder is shorting something????

The circuit i posted in post #20 shows the circuit to test.

Following your advice I did Calibrate Motors in the dark.

Now it seems to run fine even with astronomical targets. When I change speed I ear corresponding motor noise and wheel speed !

Next step is to protect all and put back everything in place ...

Thanks a lot for your kind help, hopefully the problem is resolved !

This final picture of the repair may help someone in the future ...

I have a problem with my right ascension motor unit and i can't find the answer anywhere.

While having a session i tried to slew to Saturn, it went way past Saturn and the autostar screen started to flicker so i turned it off immediately thinking my batteries were empty.

Next day i replaced the batteries with fresh ones and the ra axis would only turn left, even when I pushed the right button. I did a reset on the autostar and after that it would not move in any direction while the Dec axis works fine. I tried to allign and the autostar gave me a 'MOTOR UNIT FAILLURE' error.

Has anyone any idea what could possibly be wrong? I've made added pictures of the modest and the front looks fine, on the back i see a reaaaaally small black dot (had to use my camera to even spot it, it's that small)

Greetings and thanks in advance.

Visually I see nothing that indicates a sudden release of Magic Blue Smoke (that black dot looks like a leftover from the manufacturing process, and it's outside of a trace with nothing around it). But visual can only tell a part of the story; you'd need to test the suspect components to be sure. That said, usually with an epic type failure of other electronics, you will have some visual indicators. Not sure here though since I'm not familiar with this model.

I certainly cant see any hints there of a failure either.

Next test is with a CRO to see where the signals are getting to.

It is a very simple circuit, but it needs a fine tip on the CRO

I want to thank you for your help and express my best gratitude to Andrew ! 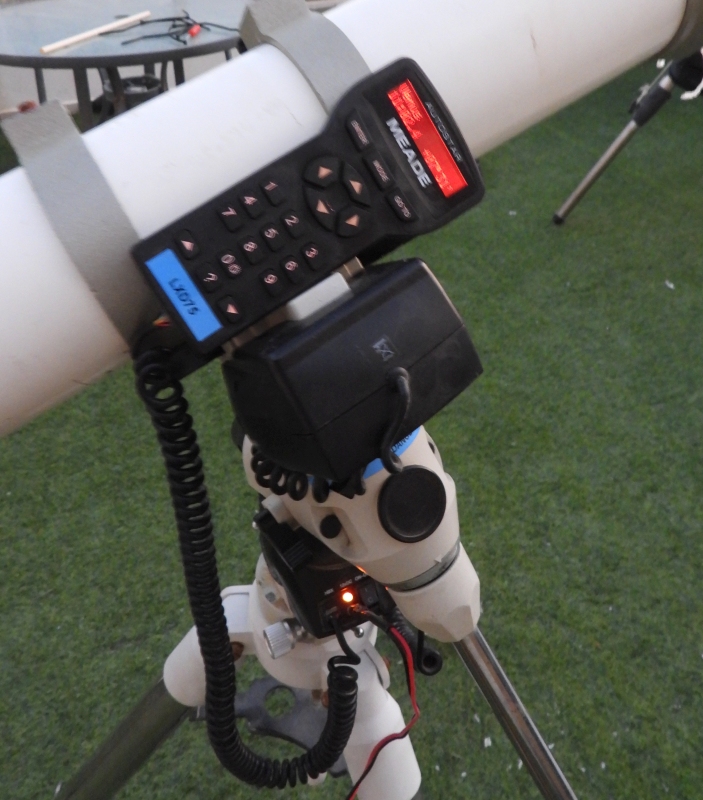 Even after poor alignment (precise inclination but crude AZ, sideral tracking is good and after parking the mount finds again the target (Venus here) and put it within the FOV of a std 26 mm eyepiece.

For me this thread is closed !