finally after what seems like years, my 11" RASA  v2 has arrived. Does anyone know of a padded carrying case that works? I've looked around but can't see anything that fits the length.

any hints/steers much appreciated, (yes, one option is to figure out how to make one :-)  )

thanks for the link, unfortunately the nearest is this

which is not long enough. I'll keep hunting though

I cut the styrofoam of the cardboard box to fit (very little cutting needed). Even the motor focuser can stay put. Very sturdy, made for a drum kit:

I usually make a plywood box using the same foam inserts as the Celeste on box. Put a piano hinge on the back. 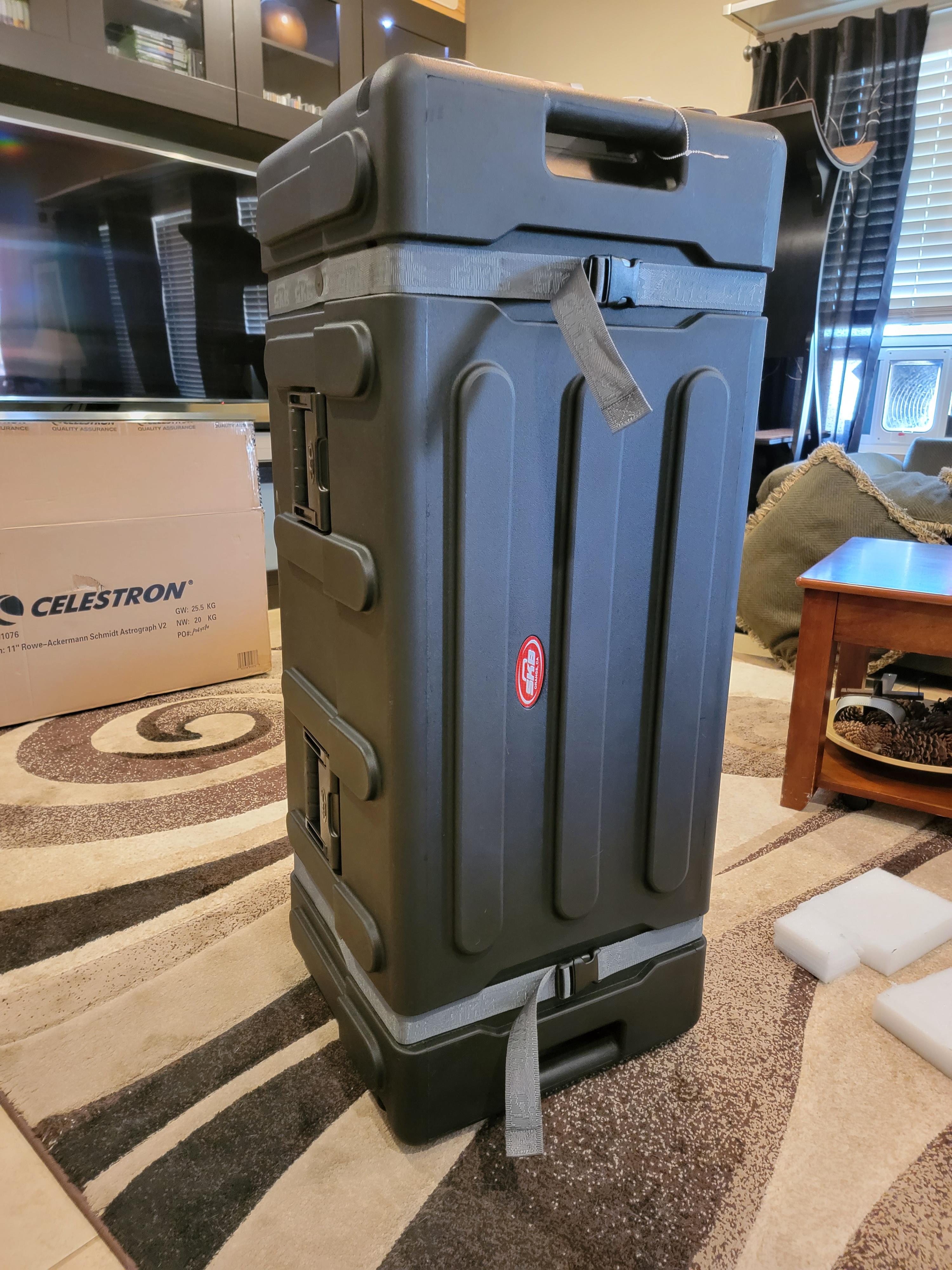 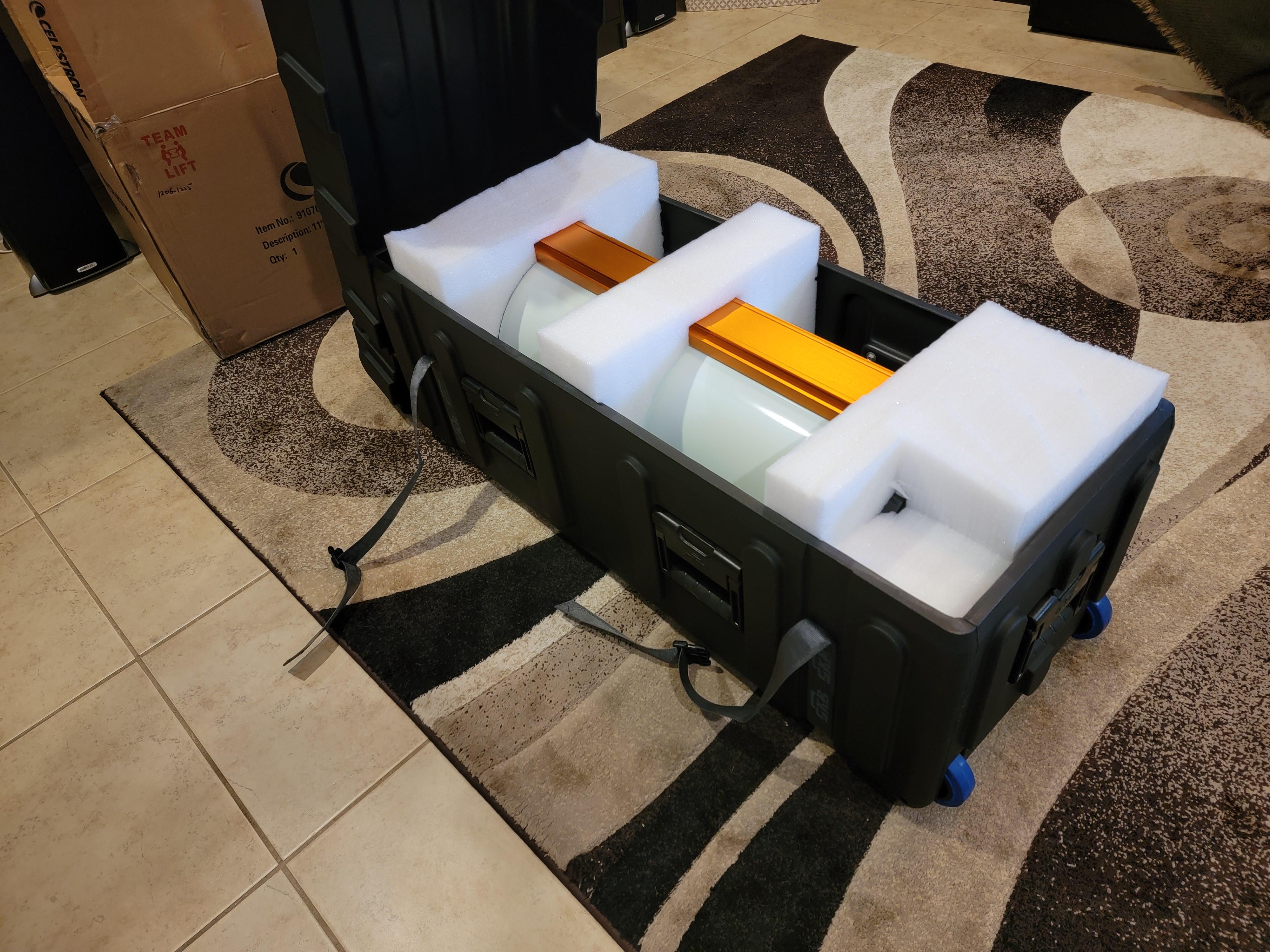 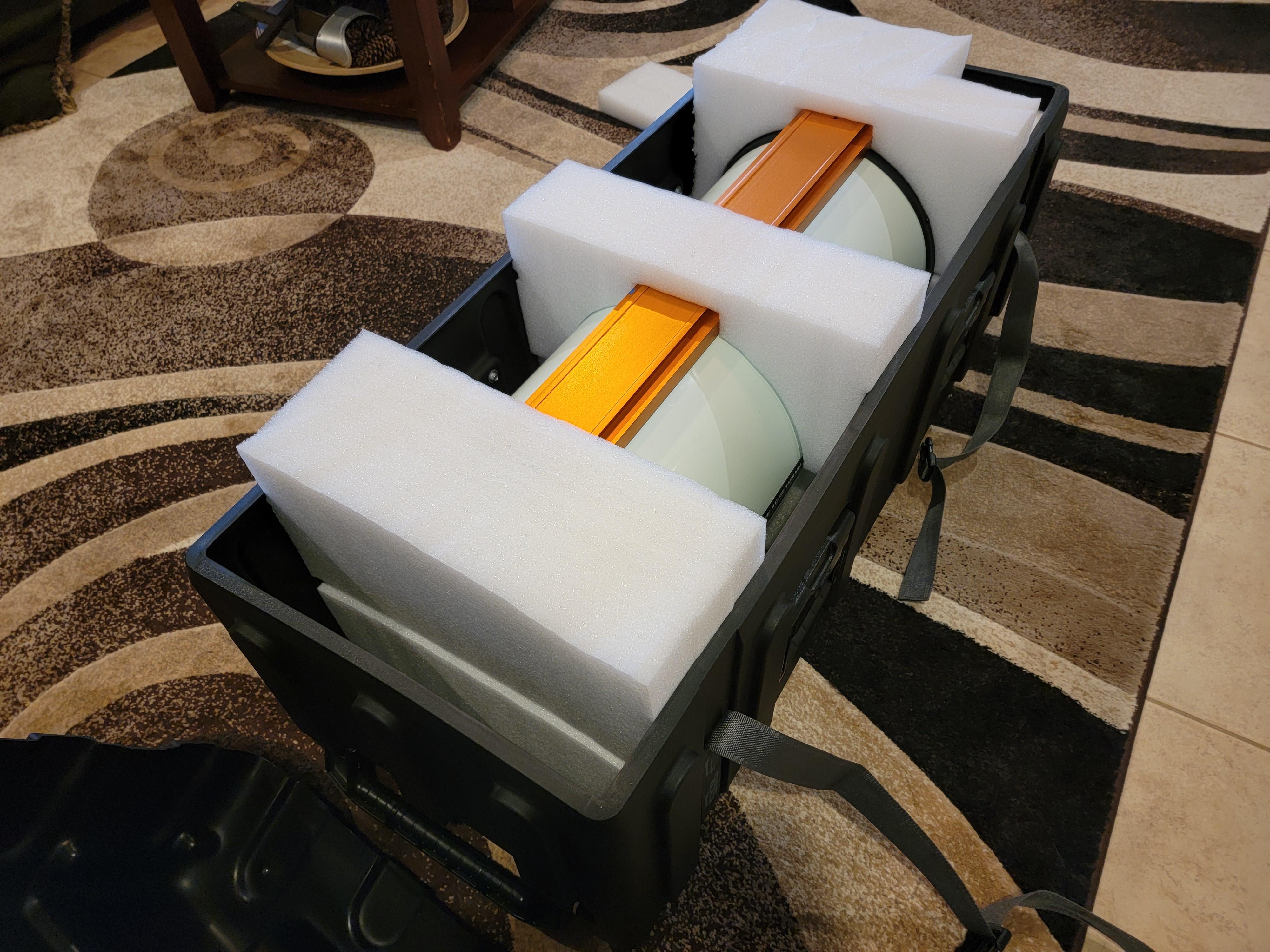 Would you feel comfortable sending the scope as checked baggage on an airline in any of the enclosures shown above - including 555aaa's plywood box?

That is properly fantastic, I will seriously look at that.

Well, after a million months I got my 11" v2, this is it set up in daylight before a 1st night's test, even still got the washing on the line :-) All balanced, all ready to go - I even got the celestron focus unit working with ASCOM and I must say - watching it autofocus (I use AstroArt for everything) is absolute MAGIC.

The lower picture is a quick test of 6 x 240 sec unguided of M101 reduced to 33% - I wouldn't call it first light either, the goal was to test the system. The slight pinch on the stars is the cabling from the Trius 814 which I need to sort out. I use a Starizona Filter Slider which is brilliant - I need to cut a hole in the side of my home made baffle to access it though.

This really was a test night - the Starizona Filter Slider, the celestron focus unit, the RASA itself are all new to me - after 15 years of using an Intes Micro MN86 this was not about getting a good image, but learning to to set the lot up, balance it correctly & all that jazz.

I think, by chance, that my choice of camera (Trius 814) with small pixels was lucky, it works very well with the optical dimensions of the scope too.

Bizarrely, in the UK we have had a mini heat wave - 2 weeks of 30-32 degrees (celsius), and at night time it just didn't cool down that much - that meant that the rig was continually changing focus, the stars were shimmery even though it was a clear night - it was actually quite rubbish, so I packed it in after one night as it was just not possible to take decent shots ( and the nights are too short).

Anyway, I now know how to set it up and what it's FoV is and I can't wait for longer nights.

I really like the box setup for the RASA and it definitely needs something like that, thanks for the link !

p.s. a FYI - I was told that I needed a retro knob in order to attach the celestron focussing unit - I got my supplier (FirstlightOptics - who were very helpfuL) to attach the focus unit and they didn't need the retro knob, so that is a bum steer from Celestron.

Would you feel comfortable sending the scope as checked baggage on an airline in any of the enclosures shown above - including 555aaa's plywood box?

Not in the one I posted.   It is not as sturdy as a pelican style case, and I wouldn’t trust it to hold up to being thrown around by the ground crews.

With mine (same as posted by AZ_Rael)? No way. But then I am amazed that the Celestron original packaging works at all. So there is the chance that it will work but I would not risk it.