I caught Comet C/2017 K2 (PANSTARRS) on the night of July 3rd during an EAA session in my light-polluted backyard.

At the time, the comet was being reported as magnitude 13. In this image, however, it appears much dimmer than some magnitude 13 stars that are in the field of view.  I suspect this may be caused by the UV/IR cut filter I had rigged in the camera for a Jupiter imaging session a few hours later (I use my ZWOASI224MC primarily for planetary imaging).

C/2017 K2 (PANSTARRS) won’t reach perihelion until December 2022 so it will be around for a while. It’s projected to brighten significantly as it moves closer to the Sun.

It might be an interesting target for anyone interested in including solar system objects in their EAA observations. 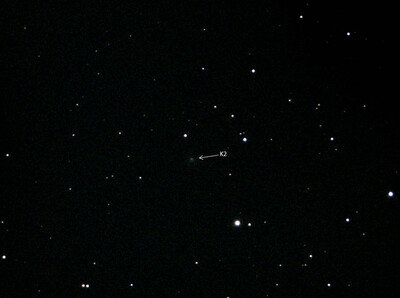 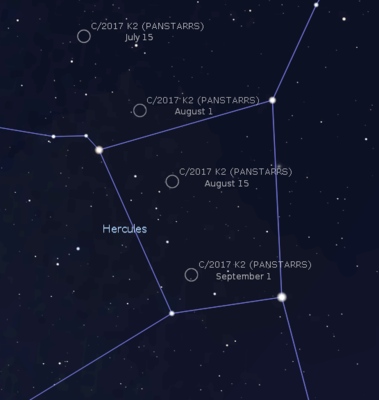 Thanks for starting the topic. It looks like we will have this target around for quite a while.

My camera is not the best for this sort of thing. I'm hoping that others who can see deeper can get a better view of this guy. Might be a good object for the August challenge?

C/2017 K2 (PANSTARRS) isn't in Stellarium's pre-loaded comet database. You need to import the orbital elements to add it to the database.

Here's how you do it:

1. From the configuration window, select plugins.

3. Select Configure then click on the Solar System tab.

8. Push the "Add Objects" bar.  The orbital elements for C/2017 K2 (PANSTARRS) will be added to the Stellarium comet database. You can now use Stellarium's search window to search for C/2017 K2 just like any other object.

I hope this helps.

Thank you so much for these instructions. They worked for me. I was wondering how you got it into Stellarium.

thank you! This worked perfect! I am again astonished what Stellarium is able to do! It is such a great and wonderful software and remembered me that I wanted always to support the stellarium team and donate some money to them! Some time ago I found the link and I used it today to donate some money!

You are very welcome. Glad the instructions worked for you. I hope you can use Stellarium to find some comets to post here.

Just a word of caution. If you are going to use Stellarium to drive your telescope to a particular comet or asteroid, even one in Stellarium's pre-loaded database, make sure you update the orbital elements before relying Stellarium to generate the correct coordinates.