huh, but the 7x50SP has a very narrow AFOV and a fairly long ER.

The Prostar has ER of about 16mm, I wouldn't describe that as 'fairly long'.

The Prostar has ER of about 16mm, I wouldn't describe that as 'fairly long'.

Hi Graham, as I attempted to explain above, it is not the absolute ER value that matters, but that value in proportion to the AFOV.

I had binoculars with 11mm of ER measured and I also used it with sunglasses, without window reduction. It had a 47° AFOV and its ER was fairly long (enough, quite, rather, relatively, tolerably - what is the correct term?).

I wrote "fairly", because in this case, 16mm are sufficient for Fiske to see the whole window with his glasses (51° AFOV).

It is my understanding that the eye at the correct eye relief shows the full picture without blackouts - and the full picture all the way to the field stop. There is no need to take AFOV into account. Except for eyepieces with AFOV > 80 degrees which get wonky but are rare in binos.

It is my understanding that the eye at the correct eye relief shows the full picture...

There is no need to take AFOV into account...

Is it possible that this simple concept is so difficult to understand?

How do you calculate the correct eye relief?

What is the correct eye relief value for each?

ECP M42, are you trying to do trigonometry here? Eye relief is an absolute. At the correct distance one either sees the whole picture or one doesn't. An ideal pinhole shows 180 AFOV degree but has 0mm eye relief. But nobody wants to look through that. I think you are trying to establish the formula for minimum ocular size and connect it to maximum eye relief. But I don't think that is the question here.

I'm in exactly the same boat - but I don't wear glasses when observing - only for reading.

For me, ER around the 14mm - 18mm range contributes significantly to ease-of-view.

Your ER comfort zone is about the same as mine. Only, with an instrument like the Nikon 7x50 SP, with eyecups folded down, wearing glasses I can see the entire FOV to the fieldstop.

Holger is one of the top bino guys on the planet, his entire website is well worth reading.

ECP M42, are you trying to do trigonometry here?

I understand what you mean, but it's not quite what it sounds like. I'm trying to say that there is a physically relationship between ER and AFOV and that manufacturers take this into account during projects. The formulas are complex and precise ray tracing is required in the end. But through a strong simplification it is possible to identify the boundary line for the length of the ER in proportion to the AFOV, which is what is needed.

I use the simplified formula: ER / AFOV * 4,2 (where 4.2 is the coefficient that I found empirically in the field). Results equal to or greater than 1 indicate sufficient ER length, but results less than 1 indicate that it is not possible to see the entire field with glasses. And of course, the data declared should be correct and consistent with reality, but as we know this is not always the case.

These are 3 pages of tables that identify in the first places the ER longer than sufficient, and go down to the minimum sufficient. Below this minimum, the ER distance becomes insufficient (but I have not reported the list). 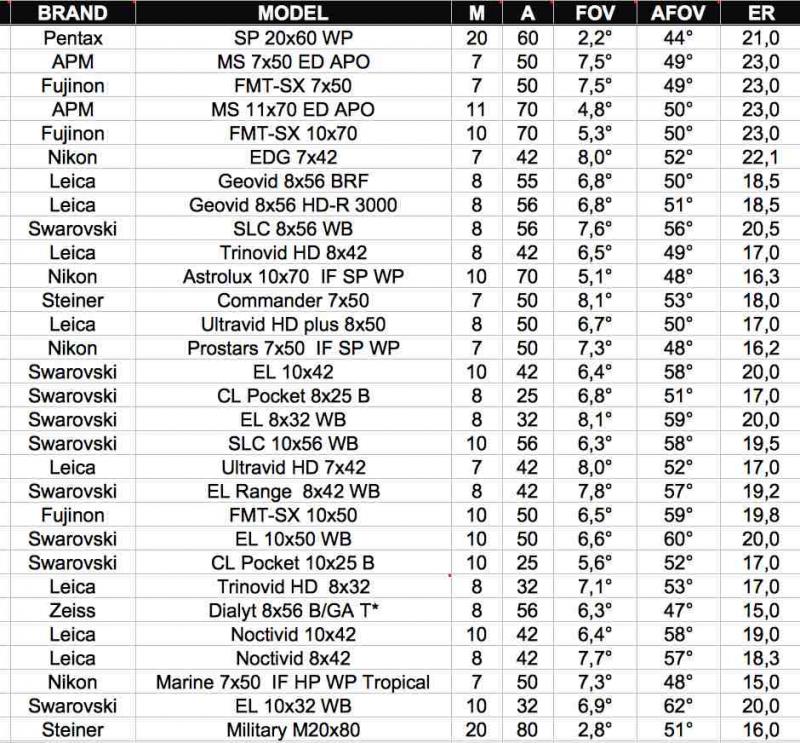 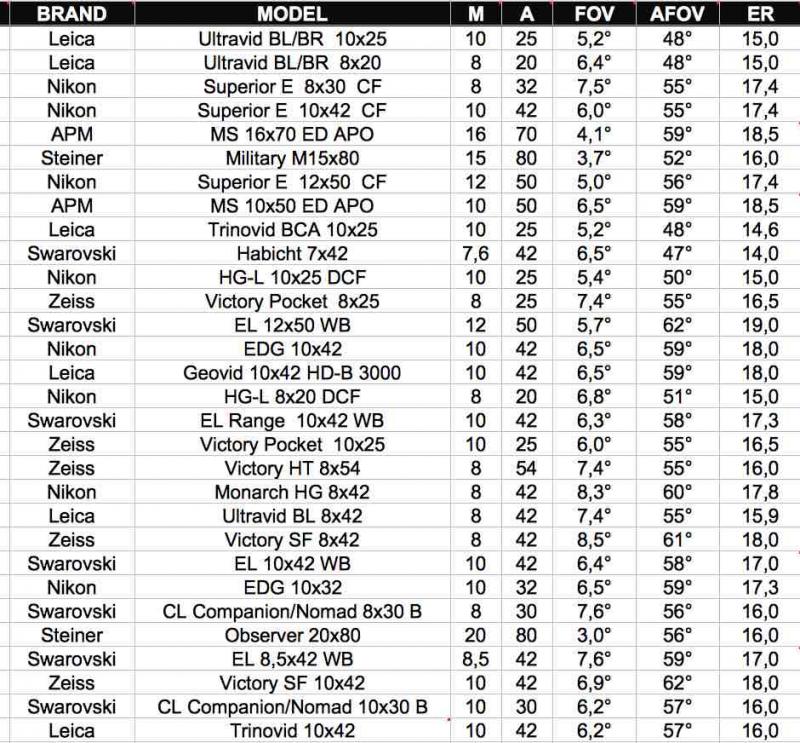 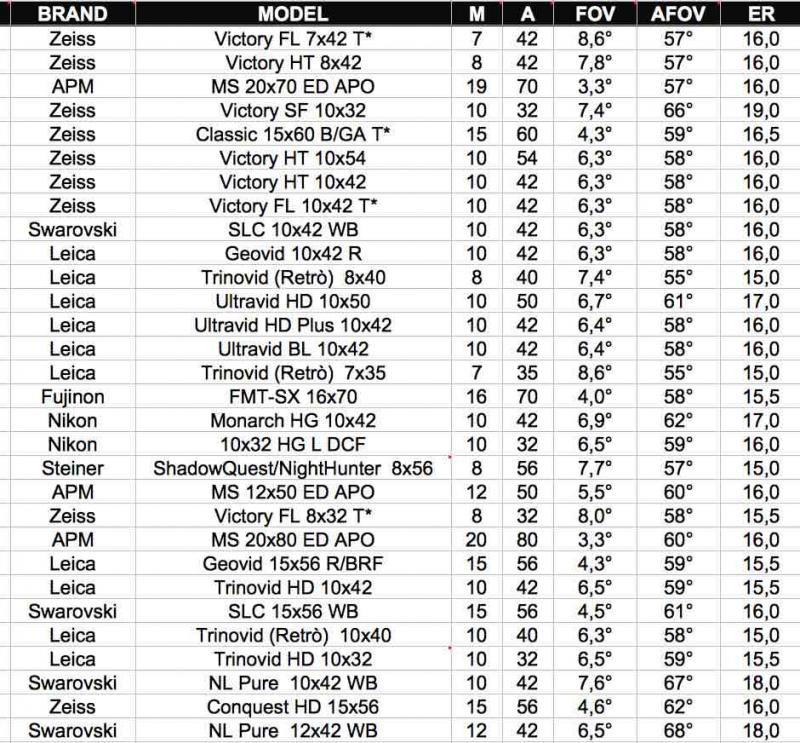 The Pentax is "the best". I have deliberately chosen only a few brands, although many of these models are of no interest to astronomy.

I went to bed early last night, but was awoken at midnight with an intestinal complaint.

Noticing it was clear, I decided to spend a "few minutes" doing some side by side comparisons (and got back to bed about 1:30 AM).

Although I have not listed them among my "astronomy" binoculars because I categorize them for day use, I own several excellent smaller aperture binoculars, including the vaunted Nikon 8x32 LX. In addition to that binocular, I also viewed with all the instruments in the following list, comparing the views back and forth: 8x30 Mastercraft (10 degree FOV), Nikon 8x42 HG and 10x42 HG, Nikon 7x50 SP, Steiner 8x56 ShadowQuest, Fujinon 10x50 FMTR-SX. I used Cygnus as the test field for the views looking at a few things -- which instruments could include both Sadr / Gamma / 37 Cyg and either Epsilon / 53 Cyg (7*53') or Delta / 18 Cyg (8*23') in the same FOV. How many stars could be seen in each instrument. And the apparent visibility of M29 in all instruments. Here are my findings.

8x30 Mastercraft -- the only instrument that could show both 37 and 18 Cyg in the same FOV, with room to spare, actually. But optically not a patch on any of the rest of the instruments in the test.

8x42 HG -- other than the Mastercraft, the only instrument that could show both 37 and 53 Cyg in the same FOV -- right at the edge of the FOV.

Nikon 7x50 SP -- sharpest binocular across the entire FOV (and I do understand the difference between the endlessly debated AFOV and TFOV, ECP.

) But under Bortle 7 skies it exhibits mildly irritating vignetting effects across the FOV -- more pronounced in hazy summer skies.

After the 7x50 SP, the HG binoculars and the LX have the best edge performance -- easily besting the Steiner in this regard. The HGs have an edge over the LX, but the difference isn't significant -- all three appear reasonably sharp to 90-95% of the FOV. I say appear because compared carefully with the 7x50 SP the views are softer away from the center of the FOV. But this isn't apparent in straight ahead observing where the views are pleasing and enjoyable.

Of the 8x instruments, the Steiner showed the faintest stars, as expected. The 8x32 view is not displeasing but compared side by side the 8x42 is obviously preferable. The difference between the 8x42 and the Steiner can be seen but is not as noticeable as the difference between the 32 and the 42, which doesn't necessarily make sense given the math but that is how it appeared to me.

M29 wasn't readily apparent in any of the 8x binoculars, even the Steiner. I wasn't observing with a star chart to check its position, since it was an impromptu session to last at most, only 10 or 15 minutes.

I generally understood where it should be seen. But it was immediately apparent in the 10x42 HG. And once seen in that binocular, could be picked out with the others. But the difference in the visibility of the cluster between 10x and 8x was considerable.

Given the comfort of the 8x42 HG, superb twist up eyecups, the 8.3* FOV, the sharpness of the view, it is really the best instrument in my collection for handheld wide field views -- easier to hold and more comfortable than the Steiner, I have to admit. The Nikon 8x30 EII isn't that tempting in comparison -- the FOV is slightly wider, but the edge performance and comfort fit/feel come down heavily on the HG side.

Comparing the 10x42 HG with the Fuji 10x50, the Fuji is brighter, and more engaging but the HG, again with the quality twist up eye cups, wins on fit/feel. And the HT views while not as bright are still enjoyable. If I were to add another binocular to my collection at this point, the Canon 42L IS is probably the most sensible choice, for excellent hand held views -- the IS feature compensating for the additional aperture of the Fuji. At any rate, that is my current thinking.

Beat your own drum, Cestus!

There's a certain magic to a nice 7x binocular with a large enough aperture.  It's easy to hold steady and the view is easy to take in due to the large exit pupil.  (My local viewing conditions are terrible, but my Nikon EDG 7x42 still delivers beautifully.)

They arrived today. Clouds and rain forecast, but just last night it was forecast as clear. First impressions: fine quality. This is an alpha or as close as I'm likely to get. It's heavy, but not uncomfortable. I can hold it reasonably steady, but on a monopod it is likely even better. I wonder what their 6x30 is like? The glass is excellent. Only when you get close to the edge does it soften. You might get better with a Zeiss, but will pay twice the cost. The image is bright, clear, and sharp during the day. The FOV seems larger then the 7.4 given, as the birders said on their forum. I didn't find it constrictive. That may be due to the larger sweet spot. Part of me, of course, wanted greater aperture. However, this was the most I could afford and I wanted something I could also hand hold. For larger views I have my 15x70 and 20x80.

It is unfair to compare to my other binoculars. My 8x40 Obie is good and has a large FOV. The Vortex DB 8x42 HD is actually quite good, but not up to the Maven's level. The mid level bins can be very solid. They are what most people have and can afford. Nothing wrong with that at all. My Vortex 15x56 DB was excellent on the moon last night. Tack sharp image that was very pleasing to the eye. A better comparison would be to the Vortex Razor UHD. However, I don't have one of those unless someone wishes to donate it for a test comparison. I'm very impressed with the Mavens and the customer service was excellent. I will give my impressions when I finally get to use them on the night sky.

I've read that Maven's FOV specs are typically on the conservative side.  According to Maven's website, the B5 15x56 has a TFOV of 4.5 degs but I've always felt that perhaps it's slightly larger than that.  In comparison with my Nikon 18x70 with a 4-deg TFOV that I have confirmed to be the case on multiple occasions, the Maven 15x56's TFOV seems much bigger.  I'll try to measure it using star angular separation one of these days to settle this once and for all.

Glad to hear that you're happy with your Maven B2 7x45.  I've read on CN that everybody needs a good 7x.

No luck last night. Did see the moon a bit and I could tell it was a clear sharp view. So let's see how long the clouds last....