I have been involved with NV Phonetography since 2017.  Until last year, I used an inexpensive phone bracket to connect my phone to my Mod 3C.  Many universal phone mounts are sold, but they mostly have the same set of drawbacks.  They each require mounting the phone in a bracket with a clamping mechanism, precisely centering the camera lens over a hole.  They are then applied to the NV ocular with a separate clamping mechanism.  The biggest issue involves slippage of either clamping system which throws the system out of alignment and ruins photos.

About a year ago, CNer JoeLin posted about using a Ulanzi phone case that has an M17 screw-in port in front of the phone’s backside camera lens (not the front selfie lens).  Ulanzi makes these cases specifically to attach supplemental lenses over the 1x lens on phones.  They sell a complete line of supplemental wide, anamorphic and macro lenses for phone cameras.  Joe had used “off-the-shelf” adapters to attach this phone case to his NVD ocular.  This system solves two big issues.  First, it eliminates all clamping mechanisms while putting a phone in the case automatically centers the camera lens precisely.  Second, the camera lens was perfectly perpendicular to the image axis.  I liked that this system permitted a direct, screw-on connection to the NVD, by removing the metal ring on the NV ocular which is used to attach the rubber eye guard.  Ulanzi made a M17 to M52 adapter and Joe used it with two other adapters to attach it to his NVD.

I was communicating with CNer Longbond who also was interested in this approach.  We designed an M17x1mm to M30x.75mm (Male to Male for closest connection) adapter and contacted RAF Camera in Belarus for the custom adapter.  We had our share of problems with guessing thread pitch on both sides of the adapter, but eventually we got it right... after purchasing a thread gauge.  Then we had RAF camera make an M30 flat ring that could be used on the ocular side of the adapter to lock the adapter in place so it did not rotate accidentally with offset camera weight.  I purchased a Ulanzi camera case for my iPhone XR, used it and liked this system a lot.  Then we had RAF make more adapters including M17 to M42 (both male and female versions).  An off-the-shelf M30 to M42 adapter is readily available on Ebay for the ocular side, and allows for different connections to be made with different devices.

In the fall of 2020, I purchased an iPhone 12 Pro Max and ordered a Sandmarc phone case which has two M17 ports over the 1x and 2.5x lenses.  Sandmarc also makes supplemental lenses to expand phone camera capabilities.

In January of 2021, I ordered a completely new adapter from RAF made for an M30 to M37 connection for a new, heavy duty phone cage that is used mainly by phone videographers.  It is made by Beastgrip, and is called a BeastCage for iPhone.  In this system, I can attach a range of  supplemental lenses, including two which have proprietary bayonet mounts, to the phone or I can use the larger M37 connection to attach it to the NV ocular.  I like this one the best, even with the extra weight of the much heavier cage.  I use the cage specifically for photography with the iPhone, and for NV Phonetography.

An Unexpected Problem:  During the process of having the original M17 to M30 adapters made, I sent one of the adapters to JoeLin to try with his Ulanzi case.  The M17 x 1mm threads fit the Ulanzi case fine, but the M30 threads did not fit the ocular on his NVD.  The threads were too loose, so he could not make the phone secure.  Joe explained that he had purchased after-market oculars to make them identical because he sometimes uses his two Mod3C NVDs as a binocular pair.  Thankfully, the M30 connection does fit both Longbond’s and my Mod 3C (and my Micro) perfectly.

If you have an adapter made, I would suggest checking the threads on your NVD ocular to ensure that they are M30 x .75mm.  A thread gauge on Ebay is cheap compared to having an adapter made with the wrong dimensions.

Costs?  Most of RAF's adapters are ~$25-$30 and take about 2 weeks or less to make, with shipping from Belarus also taking about 2 weeks (even during COVID restrictions).  The phone cases cost $10-$40 and offer modest protection for the phone.  The BeastCage is ~$140, but is not really necessary for NV Phonetography.  I like carrying my phone as a camera (in place of a heavier full-frame or APS camera).  The BeastCage makes the phone a lot more versatile as a camera and for videography, allowing the connection of a shoulder strap, supplemental lenses, a microphone, LED lights and filters.  I use a CPL filter quite often over the native lenses and it does improve my landscape images by cutting through haze and revving up color a bit.  Although the BeastCage is heavy, it offers supreme protection for the phone and is well designed for convenience.  I made a wood handle that makes the phone feel more like a regular camera and added a knob to wrap my thumb around for a very steady, two-hand hold.  Below are some photos.  There are on-line YouTube reviews of the phone cases and cage.  I will never again use a clamp-on phone bracket!

Here are links to the product pages of the 3 companies mentioned.  Ulanzi :

https://www.sandmarc.com/  (iPhone only; includes a case for free with any lens purchase)

https://www.ulanzi.com/ (makes cases for a variety of phone makers; find them under "Lens", "Phone Lens Case" 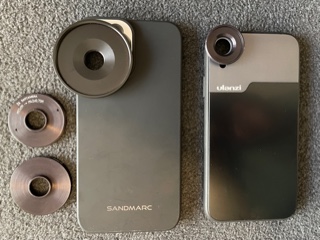 This is the BeastCage attached to a Micro NVD which is attached to a camera lens with 2" 3.5nm rear-mounted H-a filter between the lens and the NVD 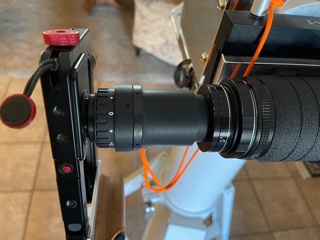 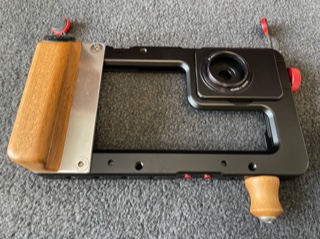 Great report, Ray! Fun fact...our first contact was when you responded to my CN thread on Mod-3 connections to Fujifilm cameras. I never liked brackets. When I learned of the M17 threaded iPhone connection, my Fuji went back to regular non-NV duty.

I know you like your Beastgrip, but since I'm a lightweight, I use the Ulanzi 17-52mm adapter to connect my 52mm filters to the 1x iPhone lens. If I want filter access to all 3 of the lenses, I use a 52-82mm step-down ring to hold the filter, then clip the ring to the case. The 52mm filter easily covers all 3 lenses.

As a visual learner, I had to read your excellent post a few times. If I follow you correctly, I would simply need a M17x1mm to M30x.75mm Raf camera adapter and a Sandmark IPhone 12 Max case and I’d be all set to take photos on my Mod 3C? Did I miss something, it almost seems too simple. Thanks!

It paid to read the post a few times...you got it right

Both sides need to be male because the inputs into the camera case and Mod-3 eyepiece are both female. Raf can make the ring and that will get you taking photos.

Some kindly advice...the Raf rings Ray and I used initially had no rim and they can be difficult to remove if you screw them too tight. This happens a lot. Ray uses a rubber strip from a bicycle inner tube to grip the threads and it works pretty well. He also came up with a clever solution that involves a lock-ring. You should talk to him directly to get details. Raf can make that also.

I also use a 3-ring method that includes a 17-52mm step-up ring (usually sold by Ulanzi), a 30-52mm step-up ring ($5 on eBay) and a 52mm male/male reverse macro coupling ring (less than $10 on eBay). It's actually pretty simple, but the 17-52mm ring goes out of stock fairly often. They sometimes pop-up on Amazon.

Thanks for the additional info! Case and Raf adapter on order. I’ll see if I can come up with a solution for the stuck adapter syndrome. The bicycle inner tube is a great idea. I’m wondering if a very slim shim slipped between the adapter would prevent the “binding.” I’ve been there with photography adapters getting stuck. Breaking the contact between the surfaces should prevent this issue.

Thanks for the additional info! Case and Raf adapter on order. I’ll see if I can come up with a solution for the stuck adapter syndrome. The bicycle inner tube is a great idea. I’m wondering if a very slim shim slipped between the adapter would prevent the “binding.” I’ve been there with photography adapters getting stuck. Breaking the contact between the surfaces should prevent this issue.

There are several adapter combinations that can be used for the screw-on connection between a phone case and NVD, including the M17 to M52 adapter that Longbond described above.  The easiest one to remove if it gets a little too tight during use, is a two adapter system, such as an inexpensive RISE (UK) 30mm (male) to 42mm (female) for the NV ocular and a RAF 17x1mm (male) to 42x0.75mm (male) for the phone case.  These two M42 adapters permit a little more purchase to remove them from both the phone case and the NVD.

RAF does put pin holes in the double male adapters, but I don't carry a pin wrench when observing.  As Longbond explained above, I do carry pieces of thin rubber for a better grip, just in case the adapters are over-tightened.  But on the M17 to M30 adapter, if the M30 side gets over tightened in the NVD ocular, there is VERY little remaining adapter to actually grip to unscrew.

I use the Beastcage almost exclusively now with its 37mm connection, with a single M30 to M37 (male/male) adapter.  It works well for me.  A single adapter offers convenience with a very rigid connection and closest positioning between the phone camera lens and NVD ocular.  A two part adapter with M42 at the center offers the safety of being able to unscrew both adapters, if one or both are over-tightened in use.  I did have RAF make two lock rings in M42 and M30 sizes and these do work to prevent the adapter from being over-tightened.  But they are also a bit cumbersome in use.  They work, but not as easily as I had hoped.  Their biggest advantage is when using camera lenses, where a fully tightened adapter might put the phone at an odd angle.  In a telescope, the entire NVD can be rotated to allow the phone to hang in an upright position.  I don't like encountering equipment problems when observing.

If you are careful not to over-tighten the M17 to M30 adapter, it will perform perfectly to connect your phone to your Mod 3C.  A shim might help to prevent over-tightening... if it does, let us know.