Recently I purchased a Zhumell Z114 for the wife to use as at 5 foot she struggles to observe with the XT8. Tried a pair of Celestron binoculars, but they were so horribly miss-aligned I returned them immediately. Had heard good things about the Z114 and decided to give it a try.

When the scope arrived, I didn’t have much hope it had survived the UPS shipping gorillas. 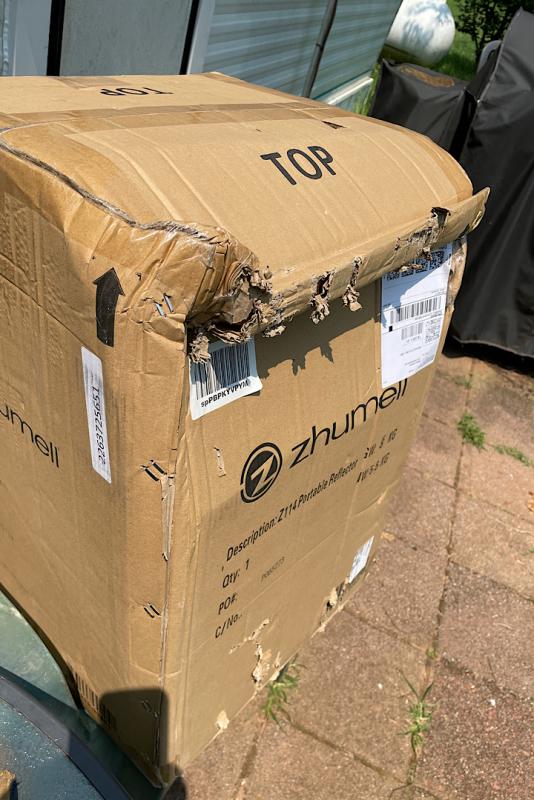 But when I opened the box, even though the scope had been bounced around there was not a scratch on it. I checked collimation with a laser, it was nearly perfect. I checked that the secondary end was round with a micrometer, it was within 0.007”. Pretty impressive! If the Z114 survived that box unscathed, it bodes well for using it as a travel scope.

Made some minor adjustments to the main mirror collimation - it was shipped without the stop screws tightened, probably a good thing - and did some daylight tests. Unless otherwise noted, all my tests were conducted using my Celestron 8-24mm zoom. Since I upgraded my lenses for the XT8, the Celestron Zoom has been collecting dust. It proved to be a good match for the Z114.

Daylight tests gave sharp images at all powers with the Celestron zoom. There was some ghosting of the secondary mirror, but that was not a surprise with a pretty fast scope. The true test came after dark.

That night we set up on our glass patio table, not the most solid option but the best available. As the moon was full, we began with it. Even though conditions were not ideal - East Tennessee haze plus smoke from the western wildfires - we still got some good images. Once Jupiter came over the trees, we switched to it. That was when the Z114 blew me away.

We started at 24mm and worked our way down. Every step down to 8 mm produced an image that rivaled my XT8. Since we had a good image at 8mm, I added my Celestron Omni Barlow. Still a clear, sharp image. At that point I switched to my Meade PWA 4mm, same clear image. Then I added the Omni 2x Barlow. It took a bit of work to get focused, but eventually got a nice image of Saturn at 235x power under less than ideal conditions with a $150 scope.

Reset with the Celestron Zoom and Omni Barlow and within 15 minutes the wife was proficient enough to find Saturn, adjust the zoom and get a clear focus. And that is the first time she hard ever operated a scope.

No, the Z114 is not perfect. The focuser is cheap and wobbly and the laser finder is way too bright and hard to align. The finder also bolts down rather than using a standard dovetail. I can work with these issues, however. The optics - the most important bit - appear first rate and the dob mount works smoothly. The whole setup is only about ten pounds and stores set up on a shelf in my garage.

In my opinion, the Z114 is a fantastic value, not only a great beginner scope but a nice little portable as well. The Celestron Zoom and Omni Barlow are a great match for this scope, I would highly recommend them. Oh, and the end cap has a removable plug which allows adjusting the secondary with the end cap on. It is also useful for letting the scope air after a humid night of observing.

Now I have only had one night of observing with the Z114, but so far I am very impressed. It probably won’t replace the XT8, but it might replace my 102 Mak!

Here's my fix for these plastic focussers...

Thanks for the suggestion. I have sermon PTFE sitting around somewhere, and I think it has a adhesive back. Might give it a try.

My recent Z114 had the best optics.

The Orion was a Open box  unit  reduced price unit with poor optics which I returned.

The two ES where good.

Like my Z114 the best. Bought rings and remounted on alt az Orion VersaGo II. Nice scope and my favorite 114 short tube to date.

I have had the same experience with open box deals. Seems to have worked pretty well for eyepieces and accessories but not binoculars or scopes. If someone sent them back there is usually a reason. My heart sank when my new Z114 came in with the trashed box. Could have sent it back but find no reason to as everything is better than I expected.

My 102 Mak is off to Sky-Watcher for repair which they are doing for free even though it is out of warranty. Just have to pay shipping which is still not cheap. Will decide if I keep it when it comes back. Was never able to get clear resolution of dso’s with it and it is not user collimatible. That’s another thing I like about the Z114, fast and easy collimation with a laser.

May look at mounting the Z114 to my upgraded Celestron alt-az mount at some point in the future. Only if the wife agrees however ….

Had a very nice Skywatcher 102mak, very nice scope for planets. Views of Saturn and Jupiter where small buy clear. High power 150 above not so good.

Like the Z114 for wide field scans. Did a little work on focuser to take wobble out. Took apart added piece of velcro. Seems less wobbly.

How does the z114 compare to the 102 mak on planets and moon? Have the z130 as 1st scope and wonder how it would compare to 102mak. Know z130 bigger aperture but mak has better focal length. Which do you feel gives sharper images on planets/moon? Or is it negligible?

The 102mak will have nice small clear views of planets my experience. I had a good example and Star tested very well, it had nice concentric rings both sides of focus. However, after 150 power views begin to soften on  planets , empty power. The moon looked good on both Z114 and 101 mak. Never directly compared.

The Z130  is excellent for wide views and good on planets.

In would say the 102mak is a good scope. For splitting doubles, moon, planets, and some bright DSO’s.

The Z130 is a excellent scope. They don’t come up for sale used very often for a good reason, they are a good all around scope. Right now they are overpriced. Don’t pay more then $200.00 for a Z130.

The Z114 and the 102 Mak (I have both) are vastly different experiences. The 4.5” Z114 has a focal length of 465 millimeters, my Sky-Watcher 102 has a focal length of 1300 millimeters, that’s slightly longer than my 8” Orion XT8. In practical terms, my 15mm UWAN is 31x magnification in the Z114 with a 2.65 degree field of view; the same eyepiece is 87x in my 102 Mak with a 0.95 degree field of view. I get a much more expansive view with the same eyepiece in the Z114, almost three times as wide, but less magnification. I would say the 102 Mak is like looking through a soda straw, the Z114 like looking through a paper towel core. If you decide to go with the Mak, make sure you get one that has adjustment screws for collimation. Maks rarely need collimating, but if they do you don’t want to have to ship it off. The Z114, like most Dobsonians, is very easy to collimate, another plus in my book. Like Far-Out I may sell my Mak. While it is a fine scope and very portable, it essentially duplicates the views I get with the XT8. The Z114 gives me a wide field option I didn’t have before.