Any suggestions re settings to try and capture the Perseids. I will set up a Canon DSLR on a tripod and have that going as well but I was thinking of with an astronomy camera - I have the Altair GPCAM327C with a meteor lends and would use SharpCap 4.0 any thoughts on settings?

Depends on light pollution level but continuous 15 or 30 second exposure is a good starting point.

The "shutter speed" for a meteor photo is the time it takes for the meteor to cross a pixel. That depends on the meteor's speed and your image scale (arc-seconds of sky per pixel). The practical consequence is that you have no control over the shutter speed. That limits you to lens aperture (f-stop) and ISO. I've found a good choice is f/1.4 and ISO 1600. If your lens is slower than that, double ISO for each stop slower (i.e. ISO 3200 at f/2.0 or ISO 6400 at f/2.8).

The time over which your shutter is open determines how bright the background sky will be. Fifteen seconds is long enough to capture a meteor's entire trail.

You need a fast lens, first and foremost, if you don't have a lens faster than f2.8 you are going to have to temper expectations when it comes to capturing a high number of meteors. Aperture is HYPER critical for capturing meteors, shutter speed and ISO are virtually unimportant in comparison. Look for a lens in the 20-35mm focal range with a f1.4 aperture, shoot the lens wide open, and take continuous exposures at your cameras optimal ISO. Going above optimal ISO is a very poor choice, you reduce dynamic range and increase the likelihood you'll clip highlights and lose color information. For meteor photography I never recommend going above ISO 1600 for any camera, remember that meteors are bright and in comparison to the background sky they are virtually all highlight information, if you shoot a high ISO you will clip those highlights and lose the green/orange/red/yellow color information that comes from the meteor composition. So stick to ISO 1600 or less, with a 24mm lens and a full frame sensor I'd shoot continuous 15-20 second exposures with no gap in between. Exposure length is arbitrary, shooting longer exposures doesn't guarantee you'll capture more meteors, just increases the chances you'll blow out highlights again.

I've done quite a bit of meteor photography over the years, this is one of my most expansive shots, it contains roughly 125 meteors total for the composition: 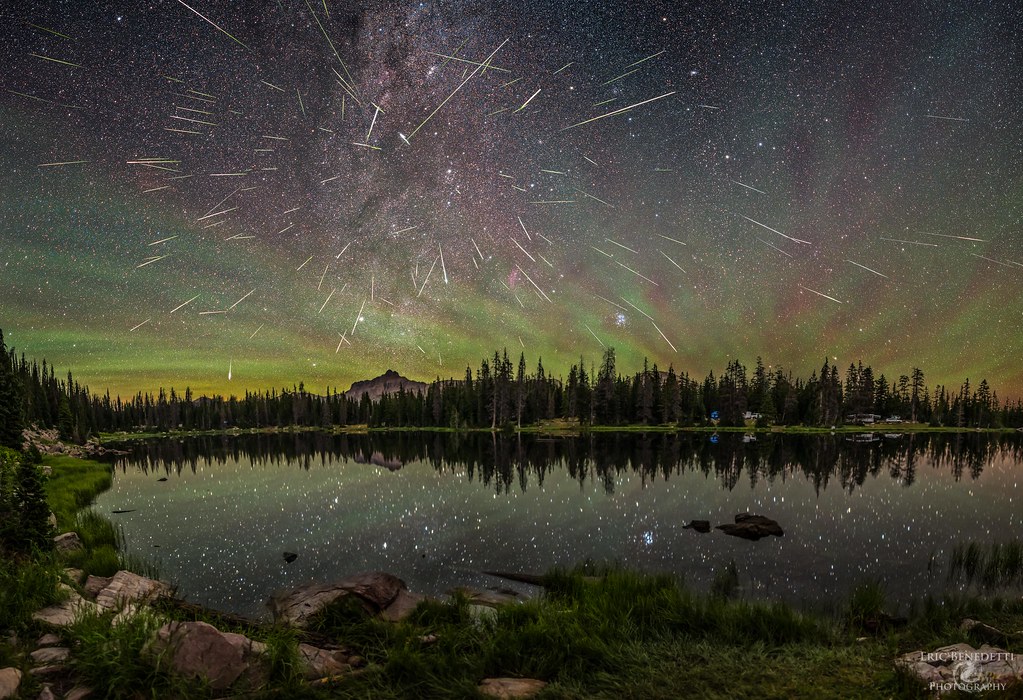 That evening also allowed me to conduct an experiment, I shot two camera setups and compared two different lenses, same field of view, one lens a 24mm f1.4, one lens a 24mm f2.8. The 24mm f1.4 lens captured roughly 100 meteors, the f2.8 lens capture roughly 25 meteors pointed at the same area of the sky. You really need a fast lens for this stuff to get the best results.

I will be using a canon and a Samsung 14mm F2.8 lens but my question was more re an astronomical camera with meteor lens attached.