ASI 294 with my Mewlon 210 yields an image scale of 0.375"/px (2550mm f.l.) according to my images uploaded to Astrometry dot Net....With this equipment combination I can pursue

I have been shooting at 1x1, i.e. no binning at all....  Results are good on brighter things like clusters and brighter galaxies.But fainter targets - NGC 281, Helix Nebula, NGC's 147 and 185 come out very poorly..

My understanding of binning is that at the loss of some resolution some sensitivity is gained by binning 2x2 or 3x3.

There be a noticeable loss of sharpness in my images if I binned 2x2?  Or 3x3?  What gains might accrue to me by binning?

Supplementary question:  I am about to embark on some imaging with the same camera but with a 200mm camera lens which will give an image scale at 1x1 of about 4.8"/px.   Would moving to 2x2 or 3x3 cause a lack of sharpness?

Thanks in advance for your sagacity!

Here is my take on binning. It is all about image scale & not over or under sampling. Each can have its demerits. I always bin my ASI6200 3x3 bin on my C14. This gives me an image scale of 0.84 arc secs per pixel which closely matches the best seeing conditions I'm ever likely to get. I probably have sacrificed some detail however that can be pulled back with drizzle if need be and I love the extra sensitivity and more manageable file sizes.

I see it as a win win with big sensor cameras. Remember that old work horse the 16803 that has 9 um pixels and the images are beautiful so of your camera has pixels far less than that beauty- what have you to lose!

I only use bin2 with my ASI294 and my Esprit 100. In fact this was always the default mode for this camera and as I understand it ZWO only released bin1 mode later when QHY did it when they introduced their own camera with the same sensor.

The ZWO website is quite detailed about it, among other things it points out:

"Remember that using Bin1-mode will decrease the full well capacity compared to the standard bin2-mode.

For a color camera binned as color, there is a greater loss of resolution when compared to binning in processing after acquisition. One other option to consider is to "bin" during the deBayer step of pre-processing. Simply choose the "SuperPixel" method for deBayering and you will get a color image the same dimensional size as if you had mono-binned your capture as opposed to color-binning the capture.

The only thing you lose by binning in processing is the smaller, faster data download from the camera.

For a color camera binned as color, there is a greater loss of resolution when compared to binning in processing after acquisition. One other option to consider is to "bin" during the deBayer step of pre-processing. Simply choose the "SuperPixel" method for deBayering and you will get a color image the same dimensional size as if you had mono-binned your capture as opposed to color-binning the capture.

The only thing you lose by binning in processing is the smaller, faster data download from the camera.

I've never had very good results from a superpixel integration. The data always looked a bit strange like it was severely lacking in detail however the deciding factor may be the quality of the initial data and usually my data is not that good being under Bortle 7/8 conditions.

You got me confused as to why mono-binning results in an image with better resolution. What do you mean by better?

When binning 2x2, your "sacrifice" resolution for higher SNR. Unless I just didn't understand what you meant by this.

The confusion is my fault. I used the term "resolution" with one context in mind but it can have several different meanings when we talk about images. It can mean the pixel dimensions of the the image, the Image scale of the image, or the spatial delineation across the target in the sky. I meant the latter use of the term when I called that attribute "better resolution".

The following content is more of a general purpose explanation for others. I expect that you already know all this but it provides some information Dave asked about in the original Post and gives context for other readers in the future. (This assumes I have not flubbed the explanation badly in some way. Let me know if I have...)

This all relates back to the diagram in Post #6 of the related thread I linked. I have redrawn the illustration used by @Art Morrison in that thread below to better show the results you might get from Mono Binning, Color Binning, and SuperPixel deBayer Conversion all in the context of a One Shot Color camera.

The first case to look at is what we all commonly called (just) "binning" in the past. For an CMOS OSC camera, this is called Mono-Binning. This case is where each group of 2x2 or 3x3 adjacent pixels on the camera are combined to create a single pixel in the image of the saved file data. 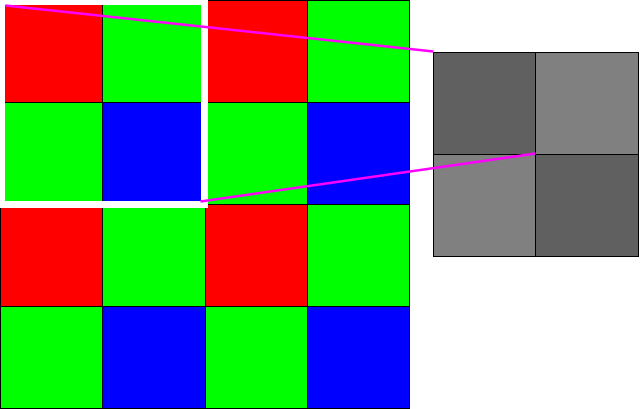 A natural consequence of doing this traditional form of binning is that for OSC cameras, we lose all color information. The output pixels in the binned frame are the combination of multiple pixels without regard to the Bayer filter over each. We do not get a color image, just the addition of the photons captured under the various filters. Also note that each output pixel is made up of 4 adjacent pixels on the sensor. Each pixel in the binned output frame represents twice the linear dimensions in the sky compared to not binning at all. The size of the output frame is one half the original in each dimension.

The second case to examine is the "normal" Color Binning Mode for ZWO OSC cameras. In this mode, we can "bin" the camera 2x2 or 3x3 and retain color information. This is not the method we normally associate with "binning" a camera. This binning operation combines non-adjacent pixels of like Bayer filter color. 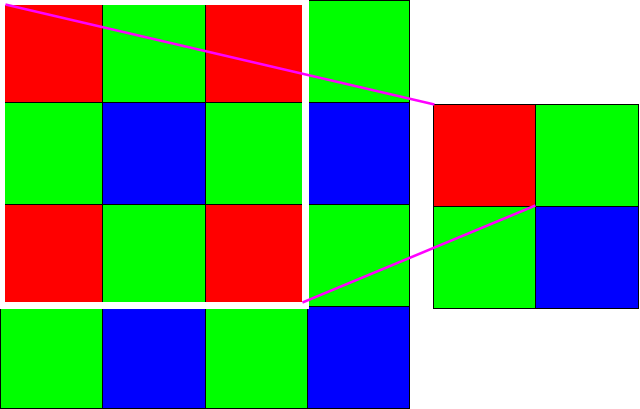 Here we do get a color image. Note that each output pixel is made up of 4 non-adjacent pixels on the sensor. Each pixel represents three times the linear dimensions in the sky compared to not binning at all. The resulting file, though, is still one half the size in each dimension as in the prior case of Mono-Binning.

When we deBayer an image, we usually use a method that interpolates the colors of pixels. Each color layer in the RGB image that results contains an estimate of the actual color derived from the surrounding pixels. The result is an image that no longer contains the Bayer matrix checkerboard but three color channels instead. This new image is the same size as the original image from the sensor. One option for deBayering is to use the SuperPixel method. In this method, all Red pixels are extracted and form the Red color channel. Likewise, all the Blue pixels are extracted and put into the Blue color channel. The Green pixels are extracted into two separate layers and then averaged to form the Green color channel. The resulting image is one half the size of the original image in each dimension. Each color channel contains an exact representation of the CFA pixel data in the original. There is not interpolation required to derive the color of any given pixel. 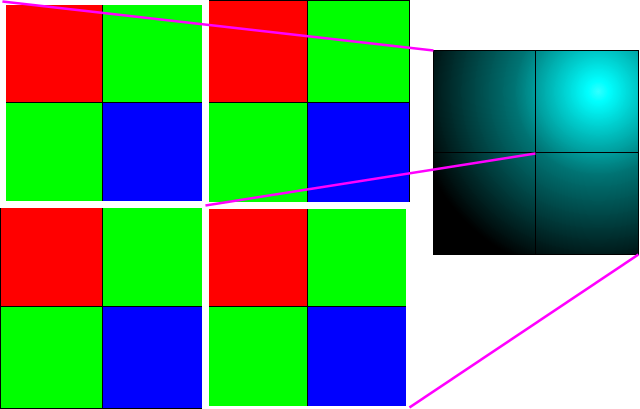 Now, look at this operation in terms of the final result. The three channel RGB image is half the size of the original raw OSC image. Each color layer contains the data from 4 adjacent pixels in the original. Thus the spatial resolution of the SuperPixel image (from the original captured at 1x1 unbinned) is twice (numerically) compared to the original. This is exactly the same result, in terms of resolution, as the Mono-Binned image but this one is in color.

That is why I suggested that perhaps imaging at 1x1 and then using SuperPixel deBayering is better in terms of resolution than using Color-Binning in the first place. The final image is the same size dimensionally but the spatial resolution (in the sky) of the 1x1 SuperPixeled image is better than the 2x2 Color-binned image. (The SuperPixel image came from a 2x2 pixels area in the original while the Color-Binned image came from 3x3 area in the original.)

Whew! I hope that all made some sense...