IC 1805, also known as SH2-190 and The Heart Nebula, is a large emission nebula in Cassiopeia, first recorded by W. Herschel in 1787. While it is a good photographic target for small telescopes, especially with narrow-band filters, large apertures are required for visual appreciation. Along with well known neighbors, SH2-199 (Soul N) and Double Cluster (NGC 869 and NGC 884), Heart Nebula is located in the Perseus Arm of the Milky Way. It lies at a distance of 7,500 light years, and extends over 330 ly in diameter. The nebula emits light by fluorescence. It absorbs high energy, ionizing utraviolet radiation from the stars of the Melotte 15 open cluster in the right upper corner of the image. It then re-emits the energy in the visible band, mostly at the hydrogen alpha wavelength of the Balmer series. The cluster is very young, only 1.5 million years old, and contains a small group of giant stars 50 times more massive than the Sun, and tens of thousands of times more luminous. Radiation pressure from the photons escaping the stars, and stellar winds ejected from the extremely hot surfaces of these stars generate outward pressure gradients upon the nebula which ultimately determine its morphology.

One effect of the outward pressure is triggered star formation whereby denser regions of molecular gas clouds are compressed into gravitational contraction, causing them to ignite into new stars. A large number of stars in the attached image are classified in the SIMBAD database as Young Stellar Objects (YSOs). IC 1805 is known as a prolific stellar nursery. Another effect is the formation of giant central cavities of low gas density as the outward pressure forces gas clouds toward the periphery of the nebula. Finally, when the rapid gas currents blowing toward the periphery pass around massive, immovable objects like stars, they create conical wakes of turbulent flow, which appear as comet-like triangles pointing toward the central cluster. In very large telescopes, the apex of each cone is shown to be occupied either by a star or a young proto-planetary disk (proplyd). 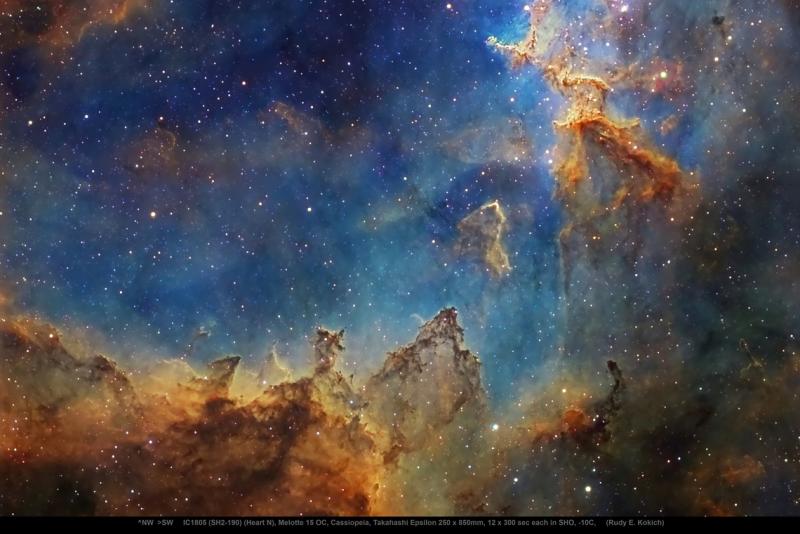 Thanks for the background info on what we're seeing.  It really adds to the image.

My IC1805 does not come even close

Fantastic image Rudy and thanks for the interesting information,

Thank you Mike, Freddy, and Mert for encouraging comments.