After a year of set up and take downs of my equipment, (Celestron C8 on a AVX mount with camera and guide scope) I decided I wanted to have a more permanent means of housing my astronomy gear.  I did not have a lot of money to build the observatory of my dreams, but I have to say, for about $800, this worked out amazingly well.  What I built was a 6x8 ft deck on four concrete piers that are used for a floating deck.  I live in Massachusetts and we have a deep frost line but I have used a floating method for a large pool deck and it works out great.  Because the deck does not touch the concrete pier, even if it moves slightly it will not hit the pier.  Speaking of which, the concrete pier does go down 48 inches and the bottom 2 feet are a square block 18x18 inches.  It took about 900 lbs of concrete for the pier, which stands about 27" about the soil.  The method to hold my Celestron AVX mount is one where you sink 12"x 1/2" J-bolts into the concrete and use a automotive brake rotor to hold the mount.  I had a machine shop drill the holes 9/16" to accept the J-bolts through the rotor and the washers and nuts then secure the rotor level.  It took about a 1 1/2 days to build the deck.

As for the shed, originally I was going to build a larger roll off building on top of the deck but lumber prices are very high right now.  So speed the build time and the cost, I bought the Rubbermaid 6'x5' storage shed with a roll off roof on one side.  With the pier being 27" the roof closes and open with about 2" of clearance for the scope when it is in the parked position.  There are a few housekeeping issues to finish up like some wire management.  I am using a 100 watt solar panel to charge a 330 ahr battery pack that runs the power for the mount, and a USB 3.0 hub, but will be switching to a Raspberry Pi or a remote mini PC soon.  If you have any questions on the build or process, please feel free to ask.  I made a few mistakes in the planning stage that I wish I had thought more about but I think I can work around some of those with little to moderate effort.

As for the name of the Observatory, I picked the name first light as a tribute to the native Wampanoag population of S.E. Massachusetts.  The name Wampanoag translates to "People of the first light."  I have no Wampanoag ancestors in my family, but Wampanoags have been living in this area for thousands of years (They are the main reason the pilgrims survived their first winter in Massachusetts) and I hope the name shows respect for the tribe. 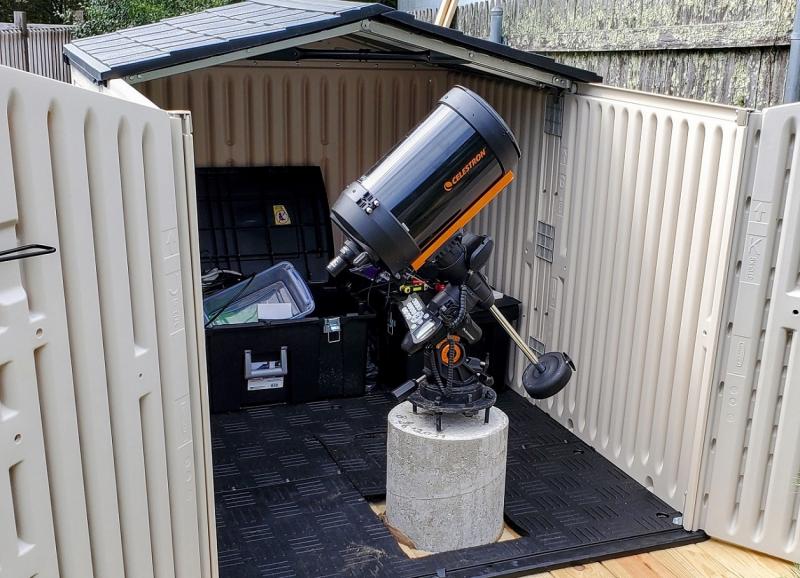 How is it holding up weather wise? I know you guys have been getting some good rain lately. how well do you think it'll hold up during the winter. I live up in maine so will get a bit, but the last few years it seems mass has gotten the brunt of the harsh weather instead of us.

I ended up assembling this right before the remnants of hurricane Ida came through so I had one day with some pretty heavy rain and winds in the 35 to 40 miles per hour range and it did exceptionally well. Of course I have not had snow yet so we will see how we handle the winters but the roof size is pretty small and it is black so I think it would help snow melt quickly and I can always just walk out there with a broom and push the snow off as well.

Do you have a part/model number for that shed?

Rubbermaid
6 ft. 6 in. x 5 ft. Slide-Lid Resin Shed.
Model #1800005
I found this shed in several online locations including amazon.com, homedepot.com and several others but homedepot.com had it for the lowest price.

In a 2012 online magazine a person wrote an article on building a small backyard Observatory and this is the same shed that they used. The article can be found online here:
https://www.airplane...uction-page.htm

Nice work! Best of luck and clear skies to you! (which are rare.)