OK so not exactly, more like 11 billion in 11 seconds. This is the quadruply lensed quasar known as "Andromeda's Parachute". It consists of four lensed quasar images spanning about 3.8 arc seconds. The individual images are smeared out in an arc on low resolution images like this, with the fourth lensed image sitting below the arc of the other three, like a parachutist. The three are about 15th magnitude and the fourth is about 18th. The lensing galaxy is fainter than 20th magnitude and isn't visible even in large telescope images. What is amazing to me is that this thing is so dang bright for being so far away (Z is estimated at about 2.7). So that is a light travel time of around 11 billion years and a distance of around 15 billion LY depending on which cosmological constants you pick. Normally a non-lensed quasar with that high of a redshift would be about 20th magnitude or so, so the power of lensing is really amazing. The other thing that's interesting is that there is variability between the different lensed images, as opposed to all of them together (since quasars and AGNs are typically somewhat variable) and so the timescale and amount of variability are probes of the matter which is in the light path between the quasar and us.

This is a stack of 30 x 11 second exposures using SharpCap's live stacking feature. The typical field star FWHMs are 1.8 arc seconds as measured in Astrometrica's PSF fitter. This image is an arcsinh stretch processed in SAOImage DS9. Telescope is a Meade 10" f/10 SCT.

Four years ago I was able to successfully capture this using the modest Revolution Imager (b) camera  riding on an 8" SCT. While yours might look like a smudge, the parachute shape is quite discernable; mine looks like a faint elongated dot. There was a link back then where I discussed with fellow CN members how to find it. It was like a hunt as the designation, IIRC, were different from sources to sources. I was able to get close enough by star hopping (I think) and finally recognized the pattern, after a few tries.

The endeavor has more to do with much I can stretch the resolving ability of $100 repurposed security camera than anything else.  I would love to capture it again using one of my ZWO cameras. Thanks for your post!

Great subject and image. Thank you. You definitely recorded the elongated parachute (3 bright components), and the faint paratrooper below (mag 17.7).

The 4 lensed images range in magnitude between 15.4 and 17.7. Not knowing the lensing amplification, and assuming that the faintest component is least amplified, we can approximate the quasar's properties: 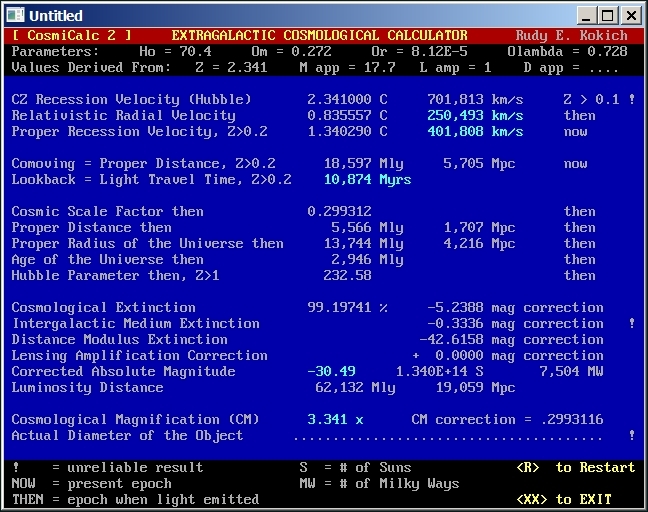