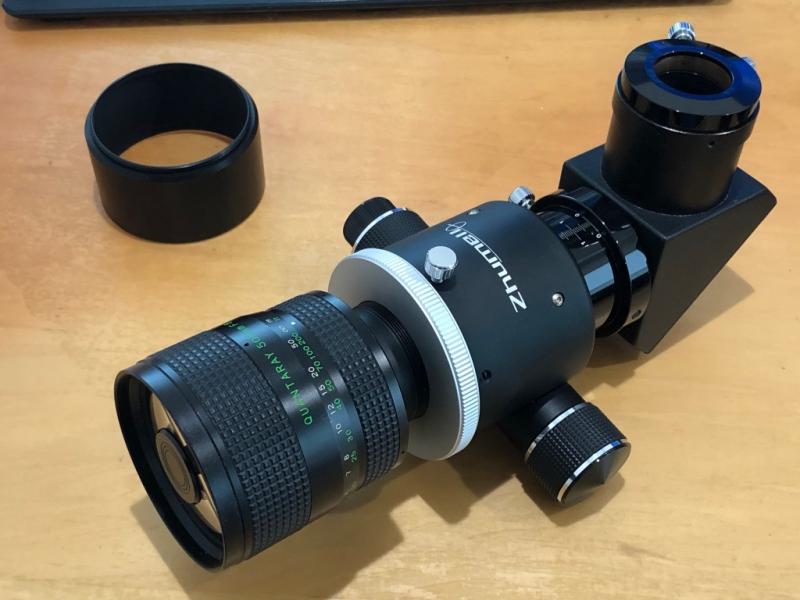 Thats a neat little lens though! What model is it?

It is one of the many 500mm focal length "reflex lenses" of the 1980's (I think). I picked this up in part of a bigger lot back in the day, and tried (and failed) to give it away to a local camera store. They are notoriously terrible for terrestrial use, but on a whim I took a few photos of Orion (I think?) and was surprised at how not-that-terrible it was for astronomy use. Other than the back-focus, of course.

edit: I never actually answered your question! Quantaray (manufacturer) 500mm F:8 Mirror Lens. Looks like people are asking ~$100 for them on eBay, but the actual sold prices trend closer to ~$30

I really think it's neat. It's directly in the category of, do not need, but do want, lol. It could go on the shelf by my 40mm Newtonian reflector.

The eBay description of one they have listed says

The eBay description of one they have listed says

Suuuure it is. My favorite eBay-ism is "I'm not an expert about [this thing with obvious water/fungus/drop damage] and don't have a way to test, but it looks fine to me!"

Ha! I'd almost forgotten about my own mirror-lens from those days.

Back in 1992, I made a pilgrimage from where I was living in the eastern Sierra's Owens Valley to the upper slopes of Palomar Mountain, to watch (and hopefully photograph) the January 4th annular solar eclipse, as it reached the midpoint of annularity just three minutes prior to the Sun's setting into the Pacific Ocean.

At the time, the longest lens I had for my Olympus OM-1 was the legendary E.Zuiko 100mm f/2.8... so about two months before the event, purely on a whim, I mail-ordered a Pentax 300R Spotting Scope Lens from Adorama. I had no desire to use it as a fully-configured spotting scope... and luckily, it was possible to order it as a less-expensive lens-only option, so I also ordered an Oly OM T-adapter with it.

Looking back, I wish I'd used Kodachrome 64 slide-film... but the shots of the eclipse through the scattered clouds came out beautifully enough on Kodacolor, and I was able to have some decent enlargements made. I've been meaning to have those negatives scanned and digitized... but like lots of projects that are waiting in the wings, I "just haven't managed to get around to it yet".

Fast-forwarding to the modern age... after getting a mirrorless Olympus OM-D E-M1 a few years ago, I also got an OM-to-M4/3rds adapter for it, so I could use the old 100mm f/2.8 on the E-M1 every once in a while. But for some reason, I've never once tried using the Pentax on it... so it's been sitting in a box in the back of a closet, lonely and forgotten, for decades.

Unlike the more common 500mm f/8 mirror lenses from back then, this Pentax is a 300mm f/5.6... and made in Japan, so it may actually be fairly sharp, as far as these types of lenses go. Guess I'll have to check it out on some stars, once the Moon is gone.

Anyway... this thread's given me the impetus to dig it out and put it on the E-M1, for show-and-tell: 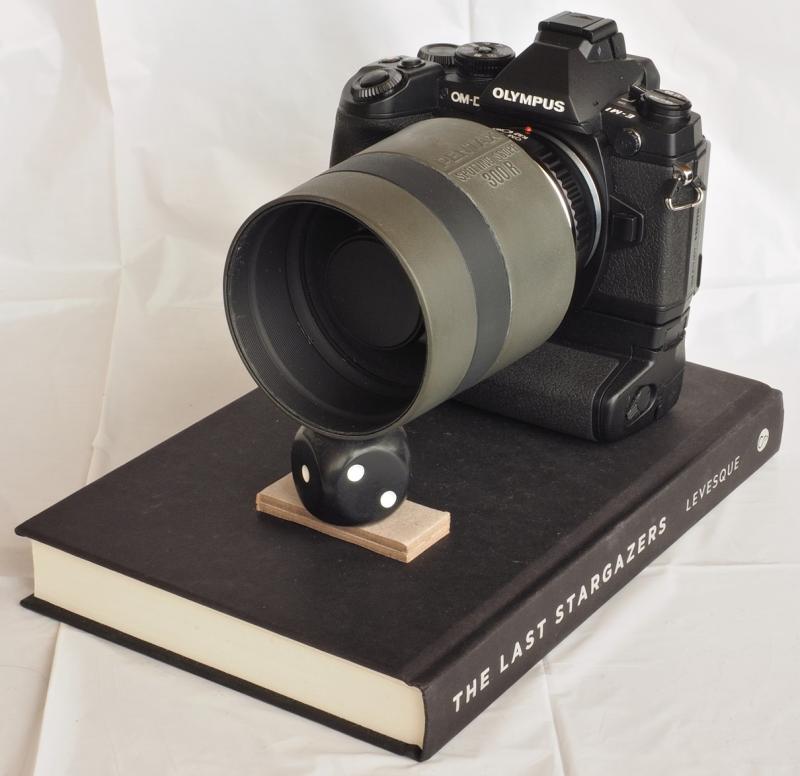 Interestingly... its focus-range runs from past infinity, all the way in to less than three feet. Fun stuff!

Thats a neat little lens though! What model is it?

AFAIK none of the "mirror lenses" were particularly sharp.

Anyway... this thread's given me the impetus to dig it out and put it on the E-M1,

Interestingly... its focus-range runs from past infinity, all the way in to less than three feet. Fun stuff!

For giggles I put this lens on a macro bellows once, and even then minimum focus seemed to be absurdly far. That being said… it did give massive magnification of things on the other end of the table. Glad to see you breaking it out!

On the other hand… does that Oly camera have sensor stabilization? Might make the lens fun to try out in a modern context!

AFAIK none of the "mirror lenses" were particularly sharp.

For sure. Even if they were, the (lack of) weight makes them vibration shake blur generators, and if you do get a shake free terrestrial shot you have the funky out of focus donuts.

… does that Oly camera have sensor stabilization? Might make the lens fun to try out in a modern context!

Both of my E-M1s are first-generation... and yes, they do.

Along with a few tracked star-test photos with the camera mounted on my CEM25P, I'll likely try taking some hand-held photos of the very small local red-tail population as they climb this valley's mid-morning thermals. Hopefully, the neighborhood gang of ravens won't chase them away before I have a chance to fire off a few shots. Achieving accurate focus under those circumstances will be an "interesting" challenge... but the in-body image-stabilization will be a huge help.

You guys are really a bad influence. I’m almost hoping you try it out on the stars and the field is terrible and then I won’t be bothered!

Hah wrnchhead - I had to see how absurd the combination was .. "for science" or something. I did do some star tests with it last year if you would accept the least rigorous, not even enough effort to be considered trying as a test. Basically, I had this lens on a Sony A6000 mounted on a Celestron EQ1 (I think?) that was close enough polar aligned. In other words, I was pretty much just converting photons and electricity into heat.

As an aside, taking a look at the photos is a trip down memory lane. What was I doing in Feb 2020? Oh how the world was about to change...

You guys are really a bad influence. I’m almost hoping you try it out on the stars and the field is terrible and then I won’t be bothered!

Regarding the generally poor image-quality of most of the 500mm f/8 mirror lenses... Olympus made one that has gotten quite a number of very favorable reviews over the years. Used ones in excellent condition go for $300-$500+ on the Bay:

In the case of the Pentax 300R Spotting Scope... your resistance to buying one is being supported by the fact that for now, at least, I could only find one available online:

Tellingly, even though the seller states that it is "Opened but unused", the photos make it look as though the scope has been sitting outside in direct sunlight for the past twenty years... and none of the photos show any of its optical elements.

Looks great! I admit I had to look at the picture a couple of seconds to understand which end should one look into...

Looks great! I admit I had to look at the picture a couple of seconds to understand which end should one look into...

Now that you mention it, I believe this would be the perfect description if Dr Seuss were to have a grab-n-go scope.

I dug up some more photos of this setup in use since y'all seem to also be fascinated by absurd combinations: 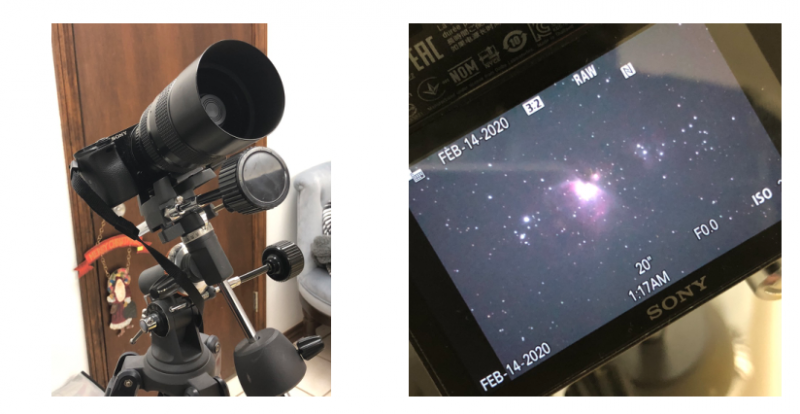 Talk about "grab-and-go". If you have a coat with a big enough pocket you secretly carry it with you for times when nature surprises you with a wildlife moment where you can take advantage of the extreme portability of your scope.

On a side note, back in the mid 1990's I was taking some part-time computer courses at B.C.I.T. which was being held on a weekend. The instructor was using one of those overhead projectors to display some of the course material. I was sitting in the back row and couldn't quite make out what was being shown. Then I remembered the 10 X 25 mini-roof prism binoculars that were convenient to keep in my small duffle addidas style sports bag. I reached down, picked them up and used them to get a clearer view. Just then the instructor asked, "can everyone see this okay?", then he spotted me looking at the board with my binoculars and said, " I guess not". The entire class had already noticed and there was a roar of laughter after the instructor asked that question. True story.

Clear skies and keep looklng up!

I was given one of these along with about 100 pieces of Olympus DSLR bodies, lenses, and every accessory ever made by Olympus 1970-1995 from the son of an avid collector. ! I mean everything! Bellows every prime lens they made etc etc!! Several of many different bodies, some new in boxes. Selling almost everything (except some of the really fine prime glass I've adapted for my Nikon digital) very quickly, and at blowout prices funded......................more astro gear

of course. I don't know why, but I kept this **** Quanterray..Really poor lens, bit now I will kludge it loke the the OP.


Also tagged with one or more of these keywords: DIY, Equipment