C-14 Prototype that was never completed

Looks promising but double pass through the corrector results in over 50 waves of SA which may mask the faults of the corrector unless they are gross. That's the conjecture. If an opthalmic lens of known, say 1/4 to 1/2 wave astig was placed in the beam the theory could be checked out

Been a weird couple days.

okay, took 3 more ronchigrams with the corrector just in front of the primary. Each successive one is with the corrector rotated 45 degrees wrt the previous. So I don’t think there’s stig. These were also taken with my iPhone taped to my lab stage. So better controlled.

I'm not at home this weekend while I work on my sitech drive at Cosmic Acres, but a thought occurred to me:

Given that this prototype's secondary hub assembly is quite a bit bigger than a stock one, and that it's CG is inboard of the corrector by maybe a couple inches, could the weight be distorting the corrector figure?

But if it is the weight of the secondary that's the problem, I wouldn't have a problem mounting the secondary on a spider to take the load off the corrector.  First things first, though.

You need to do the test were you go from one side of the focus to other and the see if the pattern rotates.

Okay, you're right.  I only rotated the corrector for the tests above.  Those should be outside ROC.

Here is a DPAC image of my C6 (100 LPI)  This is the minimum you should be looking for.

I have an Intes 6" mak casss that looked a bit like that, but with a bigger "hole" around the hole in the primary: 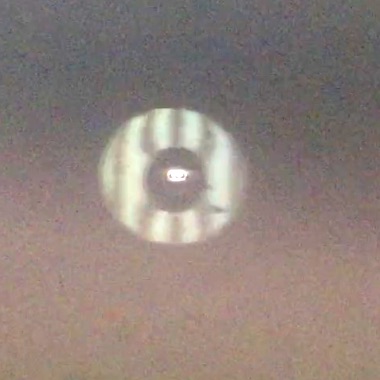 And with Dave Groski's help (all via PM!), I refigured the primary and turned it into this: 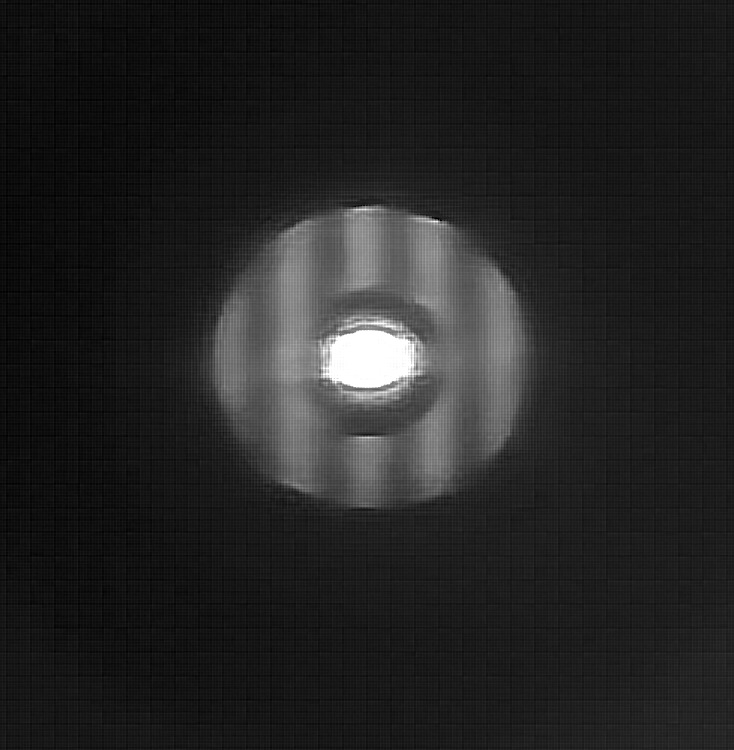 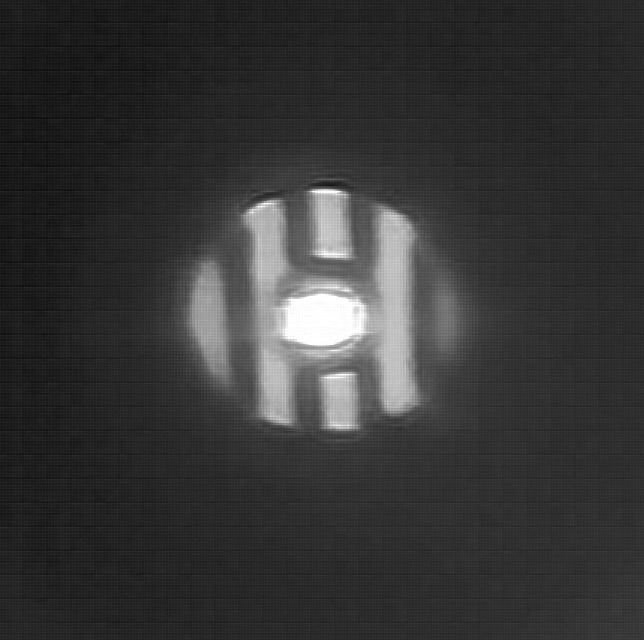 It'd sure be nifty if the c-14 just goes together with awesome dpac results, but I'd be surprised if it does.

THe outside dpac from before is the wrong file, but I can't change the post.

This should be the file for outside focus 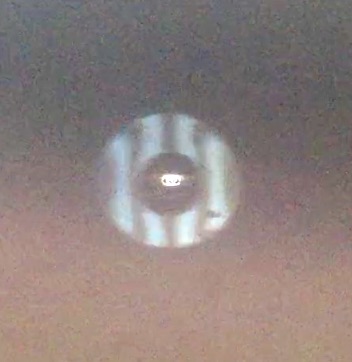 You need to do the test were you go from one side of the focus to other and the see if the pattern rotates.

When you do the inside, outside test to see if the pattern rotates, you need to look closely at the results.  A 1 or 2 degree rotation won't jump out but that  will result in  large amount of astigmatism  in the final results  with the complete optical system being tested.

As I  have said before I recommend  testing with your eye vs a camera since you can move the grating from one side of focus to other and back again and your eye is very good at detecting the rotation vs still images.

I can't seem to hold my head that steady.  But if the ronchi screen and light source are on a stable (and adjustable) stand, I suppose that would work.

edited to add:  my seeming reluctance to use the Eyeball Rule here stems from the way I configured my test stand, with the unperforated flat at one end of the bench, and a stand to support a newtonian mirror at the other.  This was mainly used this way to test Newtonian mirrors out of their tubes.  But with the mirror stand at the end of the bench, I couldn't easily get in there to comfortably view the ronchigram.  I've taken the mirror stand off the bench, so I can get in there now.  So when I do have time to test again, I'll start by mounting the ronchi and led on the stand without the camera.  I may be able to use my glass ronchi eyepiece in that case, which gives better contrast than the printed slide.

...I also could stand to rebuild the flat support mount so that I can adjust it in az/el from the far end of the bench, like Dick Parker's rig.

I'm going to put the OTA back together, and see if I can rig up my flat so I can adjust it while looking through the ronchi eyepiece (and/or the iphone assembly).

So I just started putting the OTA back together.  but when I went to pick up the secondary hub, the secondary mirror had fallen out.  fortunately, it was in the case, with foam to land on and only a few inches to fall.  The contact cement that held the cork ring to the mirror had let go.  I had this double-stick foam taped to the secondary plate for adjusting collimation, and that was very hard to get off, so I think it will work well to stick the mirror back to the plate.

Before putting the new tape on, I cleaned the remaining contact cement off with an exacto blade.  It came off surprisingly easily from the back of the mirror, which is a bit disturbing, since there were no clips to hold the mirror from falling.

Okay, I'm back on the case.  But I'm not getting parallel bands.  I get an elongated oval with concentric bands on either side.  In order to rotate the corrector, I'll need to loosen it up enough that I'm not just rotating the secondary hub, which is all I've been doing so far.  That moves the center of the oval around, but doesn't change its shape.

what should the ronchi bands look like if the mirror separation is adjusted?  Reason I ask is that when I'm doing this, the focus position is only about 2 inches outside the end of the baffle/cell, and that's with the focus knob racked pretty far with the mirror moving forward.  If I back it out, the focus position goes into the baffle tube.  This scope may have been missing more than just the corrector.  Maybe there was supposed to be an additional spacer between the secondary and the hub.

Ok. I can do a much better job with my iPhone. These three images were taken by turning the focus knob back and forth slightly. With the center position being in the middle of the range.

what the heck am I looking at???

i suppose one good thing is that the focus position I'm using here is about 5 inches outside the baffle.  I thought it was smaller than that.

I'm pretty sure what you are seeing is not astigmatism but cylinder, probably caused by a pinched corrector plate.

The corrector ring screws aren't very tight, but I will try backing them off.  What about the secondary and it's hub and baffle?  They're quite a bit bigger than a stock c-14.  Could the weight be distorting the corrector?

The corrector ring screws aren't very tight, but I will try backing them off.  What about the secondary and it's hub and baffle?  They're quite a bit bigger than a stock c-14.  Could the weight be distorting the corrector?

A strip of lead could be wrapped around the 2ndry baffle and the effect compared, or maybe a counter-balancing torque on the front. But it's hard to see that as the explanation.

Could the image of a pinhole be looked at with a high power eyepiece? That should unveil some clues.

Okay, that makes sense.  Where should the focal plane be?  Near or far from here?  I just loosened all the corrector ring screws and the ronchi looks the same.