had 21 hrs of broadband data on the helix, added in 11hrs worth of red and blue channel from the l-extreme. also used the stars from the l-extreme data as they're a bit easier to deal with than osc stars.  pity though, cause you miss out on the little galaxy smudge just behind the right side of the 'eye'

decent amount of detail seemed to come out even at 1.25"/px scale 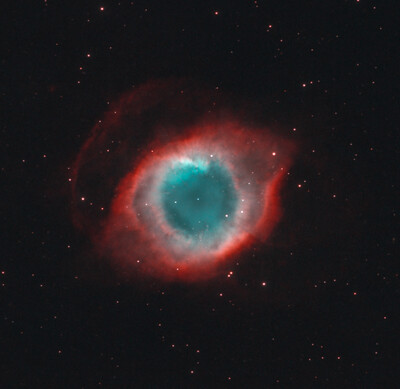 Fantastic!  Any details on equipment used and processing?

Hey mate, there's some detail in the pic description, but the details are:

broadband captured using an lpro, 2 min subs at unity.  23 hrs in total, stacked in dss with it picking the best 90% at 2x drizz.

i posted this one cause i like that i can almost see that 'depth' in the object you get when you get closer to optimal contrast; but after playing with the l-extreme and finding the formula for some very smart person's 'dynamic' rgb recombination method, i much prefer the colour pallete you get from that.  example below with the 11hrs used above.  just not the same level of detail, i thought.  going to have plenty of opportunities over the next few weeks to get more data on it, cause the roof of my house means milky way core sets at 9pm here at the moment, and the only other nebula i can point this filter at before orion or the lmc move into view at about 1am is the helix 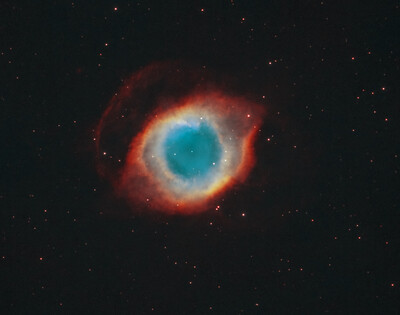 all that being said, i do wish i had the deniros for an sct right now.  this thing's resolution would come up an absolute treat with an edge 8.

The capture, coloration, and processing are sweet!

Thanks for the processing details.

I probably haven’t had 23 hours of clear skies so far this year, but I am glad that you have!