Just joined the forum, although I've been reading and learning from a lot of posts to this forum over the last 6-9 months.  I have a bit of a challenge that I'm facing.  I'm pretty new to astronomy, although I've been an occasional night sky viewer when important stuff was going on (Hale-Bopp back in 1997, and fascinated by Shoemaker-Levy impacts on Jupiter back in 1994).  Finally had time to actually try to capture images of NEOWISE last summer with a Nikon 850 DSLR using 30s images (by hand) on a tripod, which got me interested in trying to look at more things in the night skies.  Decided to buy an actual telescope later that year for the grand conjunction of Jupiter and Saturn (but of course up here in Michigan we had cloudy skies).

Not knowing how long this interest would last (and not knowing really what I was doing), I bought a fairly cheap 4" Newtonian reflector telescope on an equatorial mount from Solomark, which at least for the refractor has been okay.  I quickly realized I needed a motorized mount if I was going to be able to do anything interesting (or at least, realized the non-motorized mount they'd provided was not workable for anything other than staring at the moon... and even that was hard to track properly with the rudimentary DEC and RA controls they had).  So I upgraded to a SkyWatcher EQM-35 Pro motorized mount (again, being a bit conservative in how much I was spending because I didn't know if this was going to be something I stuck with long term or not).  I also realized if I wanted to see anything interesting with the 4" reflector telescope I was going to have to collect light for a good amount of time, so I started building some cameras onto the telescope.  Eventually, I ended up with a 50mm guide scope with a ZWO ASI 120MC  camera on that and a ZWO ASI 183MC Pro in prime position on the 4" refractor, with everything controlled by ASIAIR Pro and an iPad to run everything.  Once I figured out how to integrate everything this led to a lot of fun imaging over the last several months.

Now to the problem.  The Solomark reflector I'm using was clearly not designed to use cameras instead of relatively short focal length eyepieces.  I've been using a 2"-1.25" adaptor from ZWO to fit this on the telescope, but during the summer (warm weather) I basically had to adjust the focus all the way to the shortest possible focal length to bring images into focus on the camera's CMOS chip.  Now that the weather has gotten colder, this no longer suffices.  I am close to bringing the CMOS chip into focus (I can see a small bright disk for bright stars and can observe the secondary mirror and spider struts, but cannot get the image in focus.  Based on earlier focusing I'm guessing I'm around 2-3 mm out of focus onto the CMOS chip of the camera.  The Solomark reflector does have a removable 1.25" eyepiece mount, that unscrews from the focusing rig that looks way thicker than it needs to be (see attached photo), additionally, the ZWO ASI 183MC camera has a T2 extender (see attached photo

) that adds about 11 mm of focal length to the CMOS chip of the camera.

What I'm wondering is if there are any cheap solutions to either replacing the thick 1.25" adaptor that screws into the focuser, or a slimmer T2 adaptor that attaches to the M42-M48 adaptor to the ZWO ASI 183MC cam?  This all may be a bit moot, because I finally pulled the trigger on a WO 91mm FLT refractor which should arrive soon, and to which I'll mate the ZWO ASI 183MC camera and the associated 50mm guidescope and camera.  But I'd really hate to not have a solution to this focus issue with the Solomark reflector scope, in case I decide to use it again (maybe as a second imaging scope on good nights).

Any suggestions would be greatly appreciated...

(1) there is little point in trying to fix the focusing issue on your Solomark reflector because you are going to have bad coma on it anyway, since you are not using a coma corrector.

(2) The T2 extender can be swapped for a shorter one, which should save you a few mm. But see above.

(3) I am not sure how stable your focuser will be with the camera hanging off it, and whether it will self-extend when the cam is hanging downwards. There is a reason why newtonians built for imaging have sturdy focusers.

You are going to need a low profile focuser in order to have any chance in getting the camera to focus.

Okay thanks. So not a simple fix.  Sounds like it's probably better to set this to the side and move forward with the 91mm refractor telescope (and don't look back).  It's a shame, since I was actually able to collect some nice images when it was warmer...  I didn't have issues with the camera pulling the focuser out of focus while imaging (longest sessions were ~2.5-3 hrs), but that may have been fortuitous as I was mostly imaging up around IC 5070, NGC 7000, and the andromeda galaxy, so the telescope was close to vertical for most of that imaging.

Just so people know why I'm still interested in seeing if I can still use this scope... I've had some success in collecting images that (at least to me) seem really visually appealing.  These are probably horrible to those who know what they are doing, but they have been a lot of fun to collect and generate, and as I upgrade to a better telescope, I'm loathe to just junk this platform.  My son has shown a bit of interest in this as I've been collecting images, and I was kind of thinking maybe I could pass this scope down to him to play with...

Anyway, here are some of the better images I've collected with this "bargain basement" telescope setup. 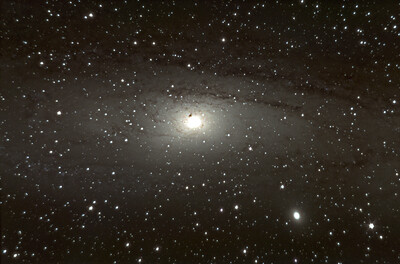 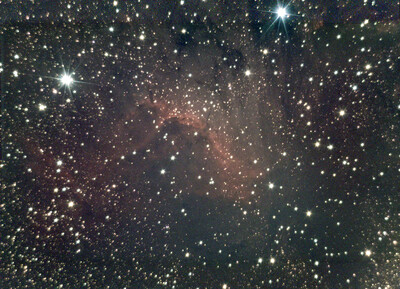 Those are beautiful images.

Have you tried turning the collimation screws for the primary mirror all the way in, then recollimating?

Would that give you enough in focus?

Those are beautiful images.

Have you tried turning the collimation screws for the primary mirror all the way in, then recollimating?

Would that give you enough in focus?

Thanks!  I'm sure they are not of best quality (certainly not of any scientific value), but they have been fun to collect and figure out how to process.

Unfortunately I can't move the primary mirror on this scope.  That was actually something I wrote to the company about before I purchased the "telescope system", and they said most collimation issues are with the secondary mirror (which is true) and that I shouldn't need to adjust the primary.  In the end, I went with them anyway because I really wanted to have the scope in order to attempt to see the grand conjunction of Jupiter and Saturn last December (every other reasonably priced Newtonian was already sold out by that point).  Ugh... we were cloud-bound here in MI for at least two weeks around the conjunction, and so it would have been irrelevant anyway, but that is the history of how I wound up with this reflector.  In hindsight I would have done things differently, but C'est la vie...

Nice pictures.  You can see some coma there, but if you're ok with it and having fun then keep on going.  Something you can try is to find another stock focuser for that reflector.  Used would be better, but new would be fine if the price is right for you.  Then you can try to modify it and get those extra millimeters.

Thanks everyone for your comments,

I just received my WO 91 FLT scope yesterday and have been setting it up this last night or two.  While "honyi" could have been a bit more circumspect in their comments, they are basically correct.  The quality of the images I'm getting now are night and day different than I was collecting from my earlier Newtonian reflector.  Thanks for all those who were kind in their assessment of those initial images....