NGC1514 is a planetary nebula in Taurus, near the Perseus constellation border. When discovered by W. Herschel in 1790, the object was described as "a most singular phenomenon" consisting of a single star "surrounded with a faintly luminous atmosphere." It led Herschel to consider that some nebulae might be composed of gas instead of a multitude of unresolved stars. Unlike Abell 39 which is almost perfectly spherical and homogeneous [ https://www.flickr.c...in/photostream/ ], NGC 1514 consists of two distorted shells filled with densities and cavities, 2.35 arcmin in diameter, and a faint, diffuse halo, about 3 arcmin in diameter. Infrared imaging by NASA's WISE Observatory also shows two large rings in the configuration of number 8, or an hour-glass, formed where the central star ejecta collide with a large surrounding molecular and dust cloud [ https://arxiv.org/abs/2105.01495 ]. The nebula is 9.43 in visual apparent magnitude, and is thought to be expanding from the central star at 25 km/s. Distance estimates vary between 650 and 2,200 light years, but approximately 800 ly appears most likely.

Planetary nebulae form when red giant stars of intermediate mass, 0.8-8 solar, run out of central nuclear fuel, and gravitationally collapse into white dwarfs, ejecting their outer layers into surrounding space. The expanding gas shell fluoresces due to the ultraviolet energy emitted by the central star, and remains visible for several tens of thousands of years before diffusing into space. Another mechanism which generates planetary nebulae involves a binary star system composed of a red giant and an orbiting white dwarf, which continuously accretes matter from the atmosphere of the red giant, and ejects a significant portion into interstellar space. Such a system, thought to be at the center of NGC 1514, results in multiple deformed gas shells, speckled with knots, densities, cavities, and rings, often further perturbed by magnetic fields and interactions with surrounding molecular and dust clouds. 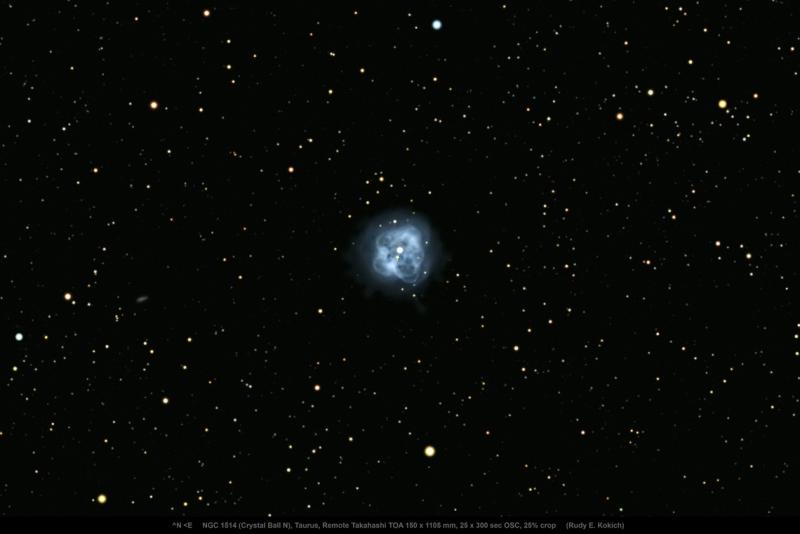 Yes, it is awesome👍👍

Thank you guys. It is easier to take attractive photos when the subject is beautiful.

A favourite PN of mine.  Nice result for sure.


Also tagged with one or more of these keywords: Astrophotography, CCD, CMOS, DSLR, DSO, Imaging, Refractor