I just inherited an orange tube C5 in good condition that has been sitting for years in its original case. Some of the accessories include the star diagonal, a Barlow lens and two oculars, a 25 and a 12 mm. It also has the original tripod and equatorial wedge.

I get decent imagery with just the diagonal and the 25mm ocular. However, if I try to increase magnification with the Barlow or with the 12mm I can't get the image in focus. I cleaned the diagonal, Barlow and oculars with canned air and a camera cloth with no improvement. There was no cover on the visual back and it looks like dust has settled inside the telescope on the secondary and possibly the primary.

The RA and dec adjustments and clamps appear to work well. The focus knob feels a little 'rough' like detents but seems to work just fine otherwise.

What can I do to improve the image quality with increased magnification? I've been poking around this site and haven't yet found a detailed tutorial on disassembly and cleaning. I know next to nothing about telescopes, just enough to be dangerous!

I'll be posting this 'scope in the C5 registry soon.

Thanks for any insights you can provide!

Hi and welcome! Congrats on the new scope.

Before you disassemble anything…

1) Check the collimation (adjusting the secondary mirror)- there are lots of tutorials online. A miscollimated scope will look decent at lower magnifications but much worse at higher mags.

2) Try setting the scope outside to reach ambient temperature before viewing and see if the 12mm looks better.

3) Sometimes the atmosphere is steadier than other times, you’ll discover it’s better some days than others. If you are daytime terrestrial viewing, you’ll be limited to pretty low magnifications.

I think Dave probably gave u the best answer to check the collimation on the scope since it has been sitting for years and probably got moved a few times and bumped around I'm sure. Those 3 screws in the black ring on the front of the scope in the second picture are the collimation screws that need to be adjusted but please research a little before u start just turning them.

Collimation has to be dead on. Use a star and adjust until you get a nice circle with lower power and use higher power to fine tune. Just a turn this way or that can make a big diff.

Thanks for the replies! Yes, I'll dig around the site for collimation information first before I do anything else. I'm not interested in opening it up unless I absolutely have to as a last resort.

How much moving and bumping around can this telescope tolerate? It's in the original case and the foam is intact. I'm 'trailer trash' (living in an RV) and I travel extensively but I'll have it in the truck with me where the ride is somewhat smoother than in the trailer. Will I constantly have to adjust the collimation?

Collimating the sct is not that hard or time consuming once u figure out how to do it properly and most sct hold it very well but if u do a lot of moving with it and notice focus is not as good then I would check collimation as one of the first troubleshooting points. Some people are ocd and do it everytime they setup their scope and others not so much. The original screws like what u have seem to hold collimation better once u get it set probably won't have to do it that often unless they are kind of loose then would require more fine tuning more often but that does not mean u need to get in there and overtighten them either cause u can cause a major headache if u strip out the collimation screws also.

Wow, nice 1974 model going by the serial number!  I have a 1975 just like it that is an amazingly sharp scope when collimating and has held it really well.

When collimating, pick a star nearly overhead when the scope is cooled down to avoid getting fooled by thermal currents inside the tube.  And very small movements of the screws, Fractions of a rotation.  And don’t loosen the center one or the mirror will fall down onto the primary.

They are really compact but do a nice job under dark skies on the brighter Messier globulars and galaxies and show a lot on the planets when skies are steady.  You also have the sturdier sand cast tripod and wedge so hang on to those.

Also for that scope, I really do like the 0.965” eyepieces, there are some really nice Takahashi ones still available on eBay, and the Celestron or Vixen ones show up here from time to time secondhand.  It just balances really well with them and the space between the scope and wedge is a bit tight for bigger sizes.

1974, huh? Thanks for looking that up! I still have to get this in the registry, thanks for the reminder.

Yeah, don't worry, I definitely plan to hold onto the original tripod and wedge. They don't build 'em like they used to! And I have the original manuals, which have been a big help.

Thanks for the collimation info. It doesn't seem so daunting now that the process is more familiar. If I have to do it frequently I may opt for the replacement thumbscrews unless y'all think that's a bad idea.

I'm currently on the move through Montana. If the weather clears up I might get a chance to try collimating the 'scope soon. The stars really pop out here!

I'll start looking at eyepieces once I get the collimation sorted. I'll check back as soon as I can, I dont' spend a ton of time online.

Thanks again for all of your help!

1974, huh? Thanks for looking that up! I still have to get this in the registry, thanks for the reminder.

Yeah, don't worry, I definitely plan to hold onto the original tripod and wedge. They don't build 'em like they used to! And I have the original manuals, which have been a big help.

Thanks for the collimation info. It doesn't seem so daunting now that the process is more familiar. If I have to do it frequently I may opt for the replacement thumbscrews unless y'all think that's a bad idea.

I'm currently on the move through Montana. If the weather clears up I might get a chance to try collimating the 'scope soon. The stars really pop out here!

I'll start looking at eyepieces once I get the collimation sorted. I'll check back as soon as I can, I dont' spend a ton of time online.

Thanks again for all of your help!

Do not replace the collimation screws. The bob's knobs are great if u generally stay in one place and just move from in a house to outside and so forth but since u travel a lot the original ones will stay much tighter and keep collimation better.

I found the following two sites invaluable for learning how to collimate my SCT.  The first one has the absolute best technique of any site for learning which screws to turn which way:

The second site shows the process from the "donut" to the airy disk:

And, as a bonus, if you ever go too far and lose the image, daylight collimation will be your best friend:

Tangent, thanks for those links! That's what I was looking for; precise, detailed instructions on the process with pictures of the Airy disk.

Medic, I'll take your advice and leave the screws in place.

Last night was good viewing at a remote fish camp, so after a few hours of equalizing I played around with it. Again, low power at 25mm looked quite good, 12mm and Barlow, not so much. I didn't touch the screws yet but I did defocus in both directions on a bright star overhead to inspect the disk as described. With the 'scope aimed mostly straight up it's difficult viewing, even with the diagonal; my back cant take much of that. I'll have to try using a chair, I guess.

What I did see was a LOT of schmutz on the disk images. It looks like bacteria under a microscope. There is still some dirt visible in the diagonal and inside both eyepieces as well as on the secondary as viewed from the corrector plate, which has a mild haze. Can these be safely cleaned?

Not sure when I'll get another chance to play with it, had to outrun a snowstorm today.

Thanks again for all of the replies!

You always see that fuzz look like bugs moving around on a blown up star that is out of focus. If the darker center hole is off center it needs to be collimated.

Here's some Quick Viz-Aids on Collimation: 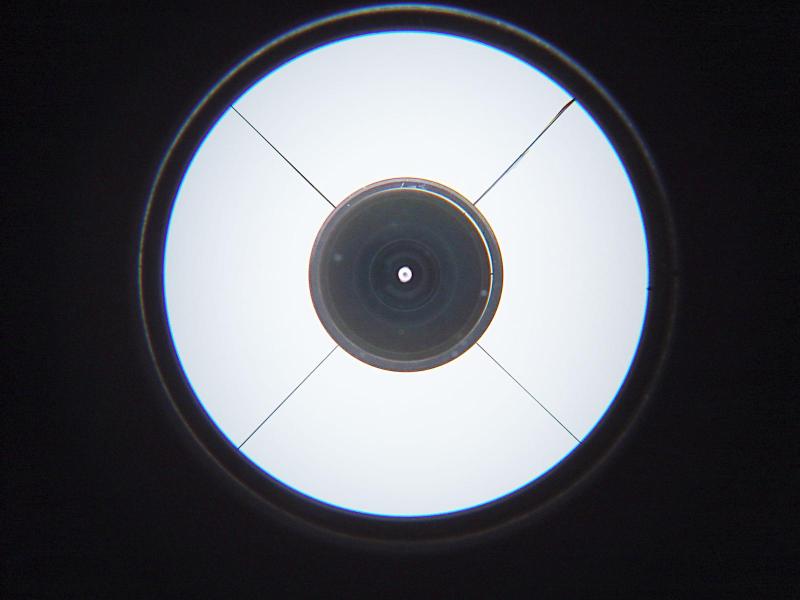 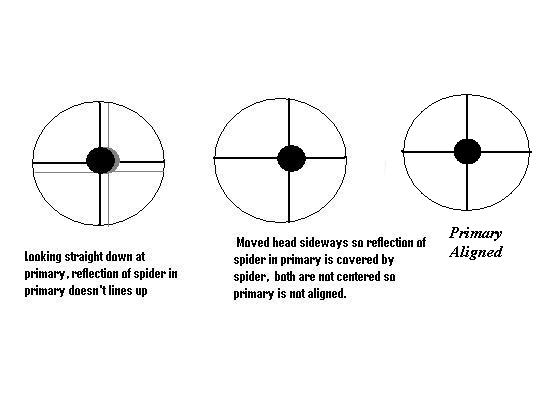 I would skip using the Barlow, those were kind of bad quality and they shifted the focus enough collimation could be affected if anything was decentered.  Plus the small exit pupil highlights every piece of crud or dust in your eyepiece, diagonal, or cornea.

Just try the 12mm by itself.  That should be enough for a lot of detail on the Moon and enough to see if the optics are good.  A 9mm 0.965” Ortho is good for most nights if you can find one secondhand, or a 7 on a  steady night.

So since I'm holed up in an RV park waiting out a snowstorm I took advantage of this boring, cloudy night and did a rough check of my collimation. I say rough because it was done inside of my 25' travel trailer using a bicycle headlight covered with aluminum foil with a pinhole in the middle.

Yes, conditions were suboptimal. But I was able to see that the disc is off center and will need adjustment. I'm still not touching any screws until I can focus and de-focus on a better light source. I'll also need to rummage in my tool box for a smaller Allen wrench; the bike multitool doesn't go that small.

Big THANK YOU to everyone who shared their sage advice!

The advice, tutorials and pictures really helped me understand the collimation process and even though I still need to be careful, it doesn't seem like such a daunting task.

I'll post an update after I get to do this for real. Until then, I'll keep reading CN articles while waiting out this storm.