For those who though rich-field refractors were new... 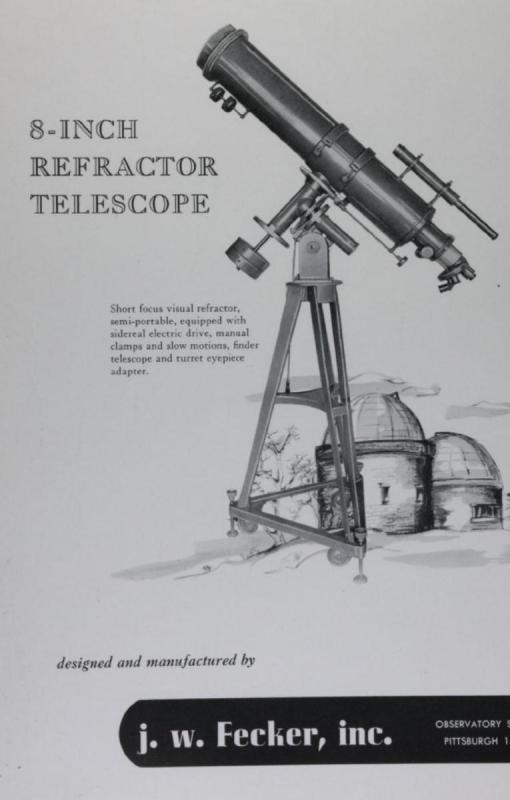 A CN friend put me into a Leonard Mallan Fawcett publication from 1960, making a well designed RFT with the then new A Jaegers 5" f5 and their 32.5mm big tank Erfle. He made one cribbing the next design in the book, with a novel sliding prism body for focusing. Ads are pretty funny, by the way.

Despite making a couple of RFTs, I don't recall reading much about the from the late 80s onwards.

I reengineered a failed RFT Jaegers f5 with a clever internal 2.25 diagonal but crippled by a period 1.25 focuser and no provision for collimating and aligning. With a 2" crayford and 30mm UFF it is amazing. My other one is done except for a needed tube trim for the straight through focuser, though I may convert it to a right angle also.

Incidentally, obstructed Schmidt newtonians can make terrible RFTs, In daylight or on the moon my 2" V/C cometcatcher, adapted to a 30mm 2" and a Baader MPCC, produced an obstruction shadow larger than my pupil opening.

I know I've seen the origin of the RFT term here on CN don't recall the details. Certainly it wasn't used by 1960 when Mallan used it in his book, unattributed.

EDIT The RFT term looks like it goes back to about 1940, at least, as one of the papers in the Ingalls ATM books, book 2 I think. Mine's still packed so I can't track it any further.

As to the JW Feckler usability as an RFT, rough scaling puts that focuser at 3" or so, not sure on the turret eps.

It would have been a perfect match for the 2.5 to 3 in surplus tank Erfle eye pieces that were a dime a dozen (almost) at that time. The 2.25" war trophy 10x80 flak BT eyepieces, about 27mm, 70+degree AFOV, would also have been great, not that I've seen one converted. Not Erfles, a much more complex design I think.

Focuser is pretty big, I'd wager the eyepiece shown is at least 1-1/4" diameter. So, about 1 deg. with a 30mm eyepiece.  Plus, as others mentioned there were some larger eyepieces floating around, I had 14 salvaged periscopes from tanks in the 1990's that had the equivalent of 32mm Erfles with 65 deg fields.  But even without low-power, wide-field eyepieces,  that 8 inch will have a much larger field than typical f/15-f/18 refractors had then.

RFT's definitely go back to the 50's - in the Scientific American ATM books (Ed A.G. Ingalls) there was a chapter on this, which specifically looked at maximising the number of stars visible in a given field of view - and considered the distribution of stars by magnitude - it concluded a 6" f/5 was ideal; at that time this meant a fast newtonian - irrespective of eyepiece type.

In the late 1800s Clark and Fitz made some "comet seeker" short focal ratio telescopes. Leslie Peletier had one