I rarely if ever post here because the Moon in a 12" is overwhelmingly bright (even with filters, yada yada). Plus I am far more into DSOs...

ANYWAY - I sold the 12" and am tooling around now seriously for the first time with the Meade ETX90.

The last thing I did last night, 10-13-21, before bringing the set up in, was look at the Moon at 31x. I noticed a couple of lit peaks beyond the terminator staring back at me like eyes. It was 7:44 PM EDT. The eyes are prominent enough, but they're at the top right...

This is probably a well-known and maybe even named phenomenon - maybe one of the experts (like Carol L) can tell me? Anyway, it was so nifty looking that I grabbed the iPhone, hoping for the best. Here you go. The second one is (poorly) balanced to better simulate eyepiece impression. 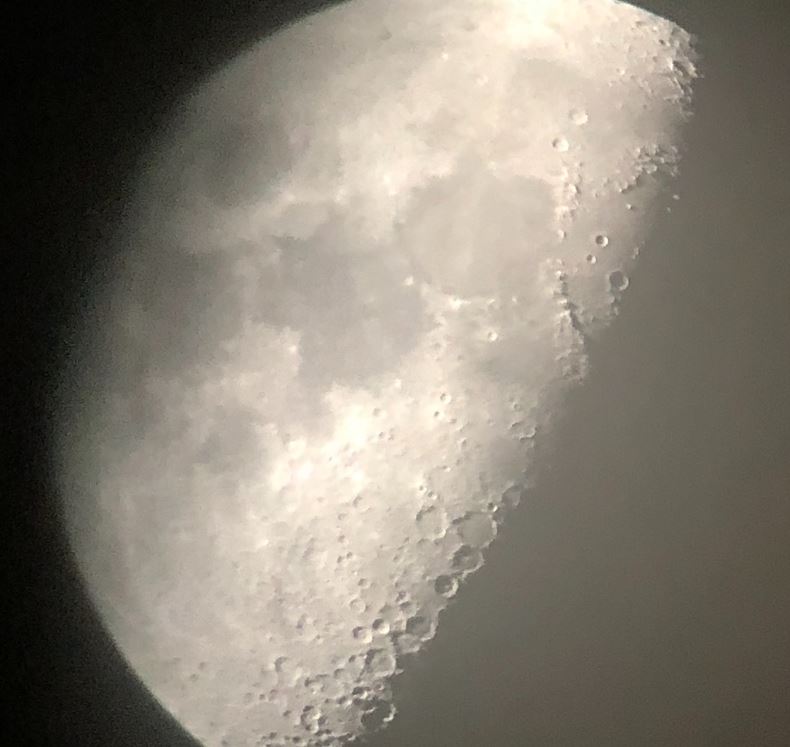 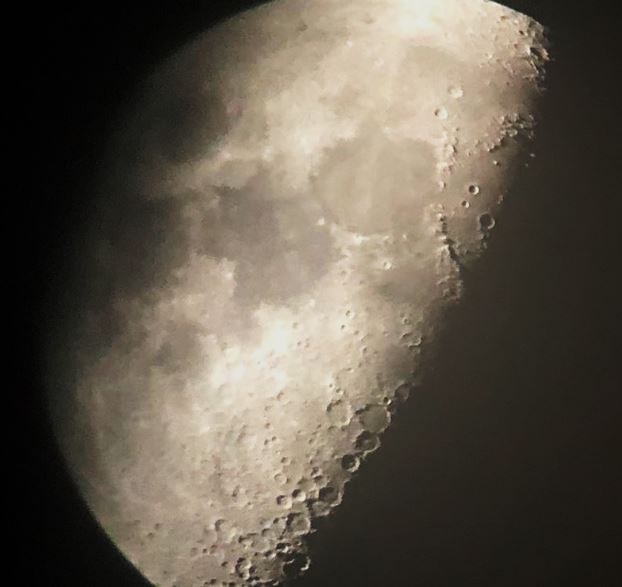 Yes, it's called sunrise & sunset over mountains. As the sun continues rising more of those mountains become illuminated eventually becoming totally illuminated & other peaks along the terminator reach up into the sunlight.

If you look down at the bottom of your pics you will see the detached rims of craters. Exact same thing happening here.

It's a good question you ask. If this effect has a specific term, I'm stumped beyond sunrise or sunset over mountains...

When seeing is very poor these detached spot-lit peaks can appear to move about. When the magnification of the scope is way too high for the conditions many people have thought that this apparent movement was due to aliens moving about on the lunar surface. Not surprisingly all of these people also have a very poor understanding of telescopes, optics and atmospheric conditions & how they work together. They are not doing anything wrong, just ignorant. I have seen some of these well meaning people be humiliated by some of our astro fraternity who don't get that these well meaning folk just need clarification, not a put-down.

There is another term, alpenglow (sometimes also called alpine glow), but this is a ONLY terrestrial phenomenon of early morning or late evening refracted & reflected sunlight illuminates mountains in a red glow while the sun is below or just on the horizon. Hence on the Moon this cannot happen as the Moon has no atmosphere or clouds to refract or reflect sunlight.

You know, thinking a little more about your question, I think it may be the following situation:

The phenomenon is called sunrise or sunset over mountains or craters, or glancing illumination of mountain peaks or crater rims.

The artefact is called detached peaks, which could be either mountain peaks or crater rims.

This question has had me thinking

It is a gorgeous artefact that litres the terminator and adds so much drama to it. And when these peaks are on lava plains these very same peaks can cast fantastic long shadows behind themselves. I take great delight in seeing how these detached peaks slowly change & become reintegrated with the rest of the lunar landscape during my sketching.

And it is this very same effect that generates the many alphanumeric apophenia apparitions such as the Lunar X.

The shadows are in constant flux, constantly changing with current lighting conditions.

The cast shadows can be utterly spectacular with some phases more conducive to seeing spectacular sights. First quarter and near last especially.

If you catch these craters or areas in the proper rising or setting sunlight then be prepared to be completely mesmerized.

Maurolycus is a very special place as its surrounding geography is very rough and there are exposed boulders or very jumbled terrain on its crater walls delivering a shadow profile like nothing I have ever seen, like little black hairs circling its rim!
While a break in its wall leaks an extremely narrow spear of light cutting through its huge interior shadow. This is a major wow condition!

This crater is unique and special beyond the wonder of Clavius, Aristarchus or Copernicus and all the wonderful rays detailing the various impactors. New and not so new.

I could observe the moon for hours and nights on end always finding new things to awe at.

People who avoid it are missing out big time!!!


See one of these sights once and you will crave another and another then before you know it you have become a lunatic!

I look at the moon a lot. Only on 1 viewing session did see a rare event occur: Lunar Transit Phenomena.

These appear as bursts of light, one would suspect a explosion. Who knows? My understanding is that this is a very rare event that does occur. That was back in 2001.

During the time viewing this event, 4 burst of light occurred on the surface of the moon, 10 seconds later the show was over...